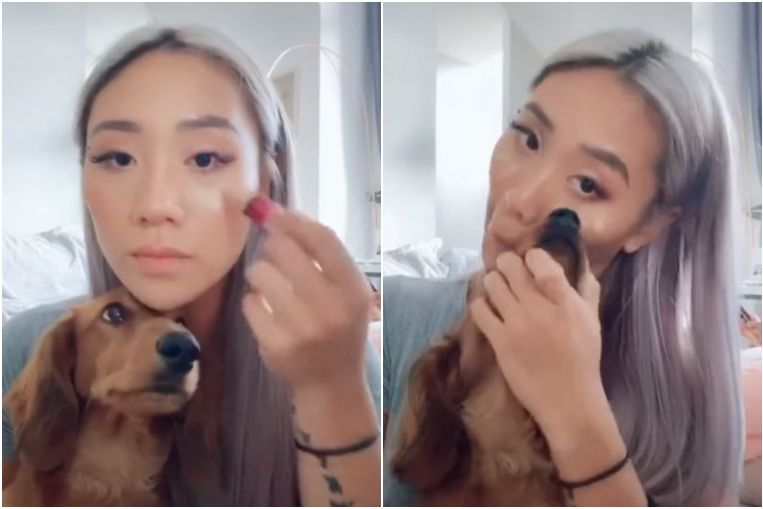 In a Tik Tok video posted in an animal lovers’ group on Facebook, the member of Singapore pop outfit The Sam Willows is seen applying concealer to her face and using the nose of her dog, Nacho, to smooth it out.

Amid the uproar from netizens, one person claimed that an ingredient used in the concealer poses a risk for dogs as it can cause skin allergies.

Dogged by the howls of protest, Tang, 28, posted on Tuesday (Oct 15): “I would like to assure you that he was a willing participant and I would never do anything to hurt him.

“And if you watch carefully, I’m not even gripping his mouth tight at all (I’d be crazy to force him) so if he hated it, he would struggle or run away.

“I’m sure those of you who have any experience with dogs would know that. (I also wiped his nose immediately after and there’s nothing in the make-up that can harm him) so don’t worry.”

Tang’s haul-up by netizens comes in the wake of another in September involving Sam Willows bandmate Benjamin Kheng, who was featured in a magazine.

A pose he took for a photo spread suggested that he was aiming a gun at himself, which got some netizens upset over his perceived indifference towards suicide.

Kheng later apologised, posting: “Suicide is not a commodity to be glamorised and should never be painted in a trivial and tokenistic light. My apologies to Samaritans of Singapore, of which I’ve been a spokesman for (in the past), and anyone else going through depression of any degree.”