In the driver’s seat! Olivia Rodrigo took the Saturday Night Live stage by storm during her debut on the sketch comedy series.

What We Know About Olivia Rodrigo, Joshua Bassett and Sabrina Carpenter’s Love Triangle

The 18-year-old musician was the musical guest for the Saturday, May 15, episode of the hit show, performing two of her chart-topping tunes. Rodrigo kicked off the night with a haunting rendition of “Drivers License.”

She wore a pink dress with glitter polka dots as she sat on a piano and belted out the heartbreaking track on the 30 Rockefeller Plaza stage. 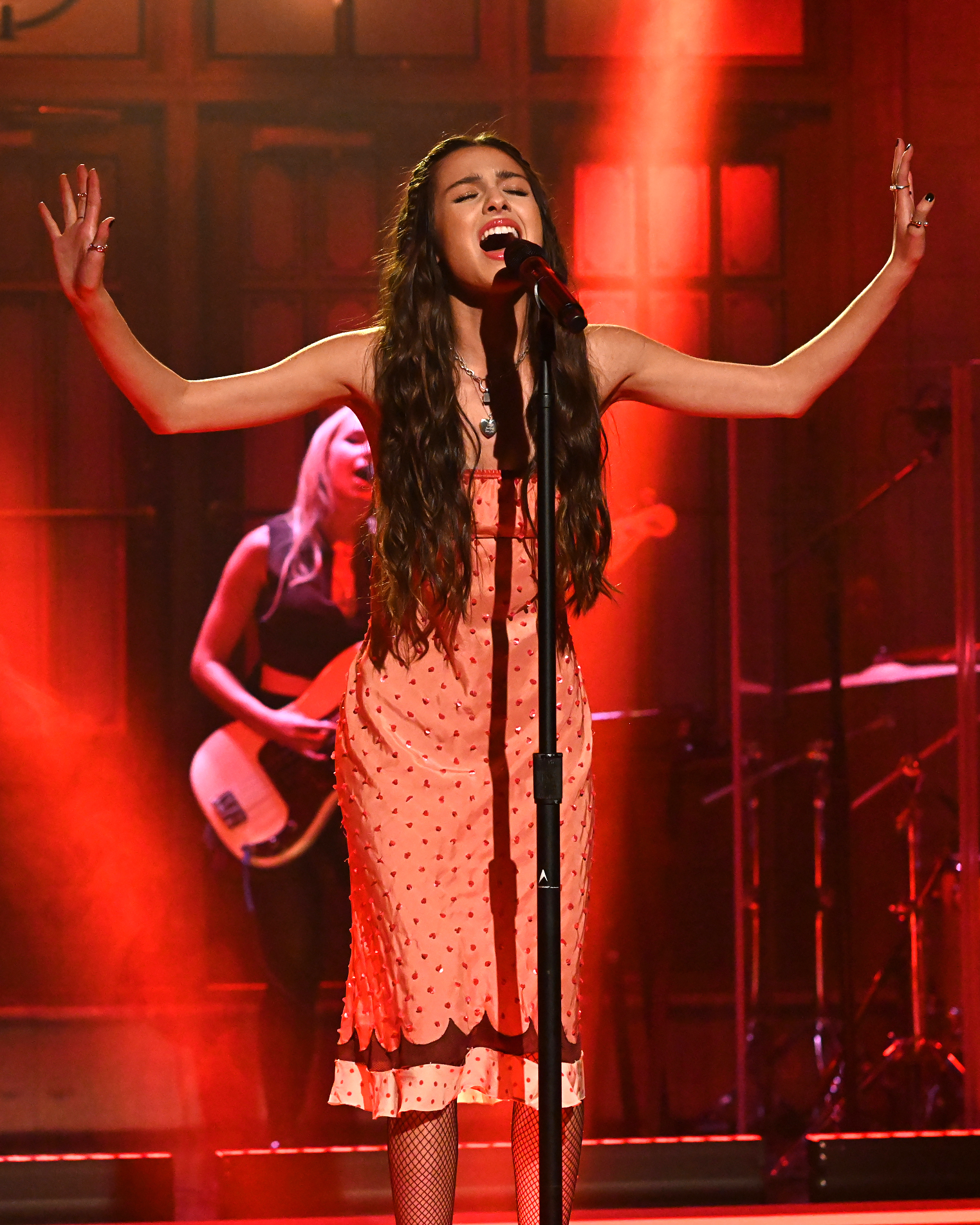 Later in the show, The High School Musical: The Musical: The Musical Series star sang her newest single, “Good 4 U,” wearing an edgier outfit. Rodrigo showed off her rocker side in a Vivienne Westwood plaid corset and matching pants. Her nails also paid tribute to the track, reading, “4 u” on two of her fingers.

Fans received another treat while watching the Disney Channel star on Saturday … a teaser for her upcoming album, Sour. During the show, a commercial for a “Sour hotline” played with a number that viewers can call for a “free taste” of what’s to come from the singer.

Unlike many of the fake commercials that SNL does every week, if you call, 323-622-SOUR, you can hear snippets of her upcoming record.

“Hey, It’s Olivia! Thank you so much for calling the Sour Heartbreak Hotline,” she says on the pre-recorded message. “If that’s not enough for you, call back later for more flavors!”

The “Déjà Vu” singer gushed about her time on the famous show via her Instagram Story on Saturday alongside a photo of her name printed on an SNL card. 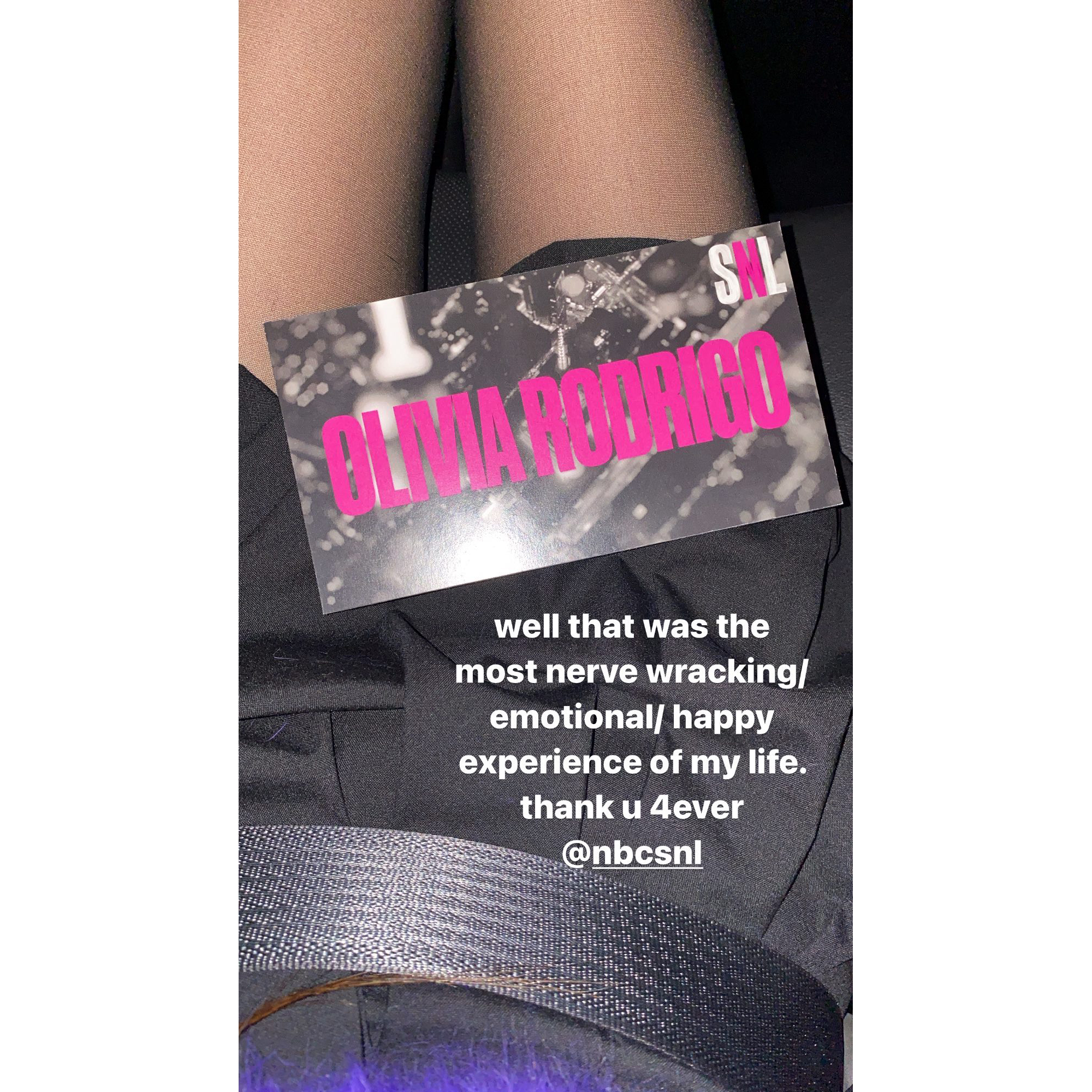 “Well that was the most nerve wracking/emotional/happy experience of my life,” she captioned the snap. “Thank u 4ever @nbcsnl.”

Rodrigo’s SNL debut came three months after she got a shout-out on the comedy series in a sketch about her hit song “Drivers License” following all the drama surrounding who it was written about.

“DRIVERS LICENSE SNL SKETCH IS THE BEST BIRTHDAY PRESENT EVER,” she tweeted on February 20, the same day she turned 18. “IM [sic] SHAKING.”

During the February episode, several cast members debated the meaning of Rodrigo’s song, which is allegedly about her relationship with her TV costar Joshua Bassett and his new romance with Sabrina Carpenter.

“I think I overheard on the news or something that it’s actually about the kids from High School Musical — I don’t know,” Alex Moffat explained, to which Pete Davidson replied: “Oh, who? Vanessa Hudgens, Zac Efron, Sharpay — that whole crew?”

Page then clarified that it was speculated to be about the new High School Musical series following Rodrigo’s alleged fallout with Bassett, 20.

The Bizaardvark alum made headlines in January when fans claimed that she wrote the track about her costar after the pair allegedly dated. Listeners believed that Rodrigo was throwing shade at Bassett and his new girlfriend based on numerous lyrics in the track. The Girl Meets World alum, 22, and Bassett have since released their own music, some of which fans think is a response to the An American Girl: Grace Stirs Up Success actress’ tune.

Rodrigo addressed the controversy the same month, telling Billboard, “I totally understand people’s curiosity with the specifics of who the song’s about and what it’s about, but to me, that’s really the least important part of the song. It’s resonating with people because of how emotional it is, and I think everything else is not important.”