There’s nothing quite like an unexpected appearance from Meghan Markle and Prince Harry together to garner support around a special cause. On Nov 30, the Invictus Games, an adaptive sports competition for wounded, injured and sick veterans, posted a new video on Twitter promoting next year’s event: The sixth-ever Invictus Games in Düsseldorf, Germany.

The cheeky black-and-white video starts off showing a group of people playing ping-pong with one another in an empty arena. A female player looks over to her opponent and smiles: the camera pans over to reveal that it’s Prince Harry, ready to battle it out. His opponent’s shot is too quick for him and he loses the point, leaving the match — and making way for Meghan’s cameo as the dramatic music builds.

The video ends with Harry and Meghan on either side of another ping pong table: Harry looks lovingly to his wife, then Meghan smiles and nods back, seemingly saying “game on” to her husband.

“Are you ready?” wrote the organization in the caption. “The incredible experience that is the #InvictusGames is coming ever closer.”

The caption continued, “Be a part of it to experience the power of sport in recovery in Düsseldorf 9-16 Sept 2023. Tickets for the Opening and Closing Ceremonies are now available!”

For those who follow Harry and his many charitable efforts, the Invictus Games will ring a familiar bell. In fact, the cause is close to the royal’s heart because he himself thought of the idea and created the organization. 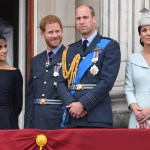 “As a British Army officer, he saw many wounded servicemen and women during two combat tours in Afghanistan – and so the price they paid for serving their country,” the organization states on their website. “From 2007 to 2008, Harry was deployed to Afghanistan’s troubled Helmand province. On the flight back from this – his first – deployment, he and his uninjured comrades flew back with three seriously injured. That flight became the birth of the Invictus Games.”

This video proves that the organization is just as aware of Meghan’s star power as ever, and she’ll be playing a featured role in the upcoming games to keep public interest and excitement high. With a cause and event so close to Harry, it’s no wonder Meghan was willing to make a special appearance!

Before you go, click here to see more of Meghan Markle & Prince Harry’s milestones since leaving the royal family.