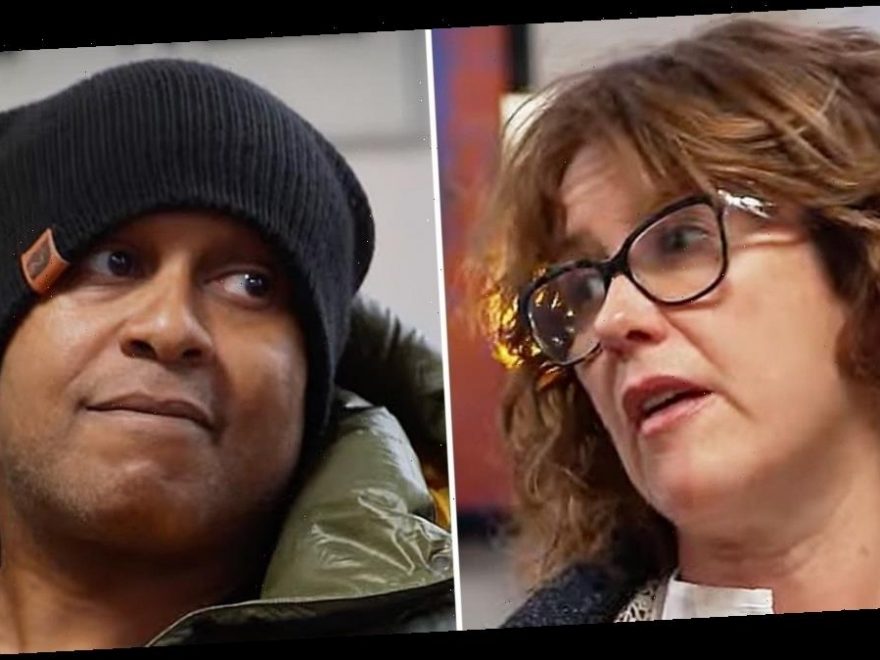 Nothing’s off-limits. The Real World Homecoming: New York cast dove into the topic of racism in Us Weekly‘s exclusive clip from the Thursday, March 18, episode.

‘The Real World: New York’ Cast: Where Are They Now?

“The sad thing about this is we’re now 29 years later, and you are still doing what white folks have said to Black people and other people of color, over and over again,” Kevin Powell told Becky Blasband in Us’ exclusive teaser. “Black people have been told you can’t show a range of emotions.”

Kevin, who is one of seven original The Real World: New York stars to reunite for Paramount+’s new series, shut down the singer after her insensitive remark.

“When we describe people of color like that it feeds into the history of white supremacy in this country,” he told Becky as she shook her head in opposition.

The 2020: The Year That Changed America author then addressed the upsetting conversation between the pair during his confessional, explaining, “No one’s yelling, no one’s screaming, no one’s cursing. But this defensiveness and this inability to listen when people of color are speaking their truth, I just think is really terribly sad.”

Memorable ‘The Real World’ Stars: Where Are They Now?

Becky continued to try and explain her side of the discussion as her housemates looked on, asking everyone to “forget about color for a second.”

She added: “I’m trying to say what was going on in the conversation of who we are as people. I’m trying to take the politicizing out of it.”

Heather B. Gardner weighed in during a confessional interview, saying, “One of the things I know, and I’ve learned thanks to radio, is you have to listen. You have to listen to people’s tones. To people’s point of views.” She added that the conversation was “awkward” before Becky detailed her past encounters with people of color while taking dance classes.

“What I was given was a privilege of being part of that family,” Becky told the group of her experience doing an Afro-Brazilian immersion course. “I lost my skin color when I was there.”

At one point, Norman Korpi chimed in, telling Becky that she’s “taken something so big and made it so personal,” noting that she’s not really listening to Kevin’s take. Kevin, for his part, admitted in another confessional that Becky “doesn’t understand racism” based on her dance story.

“You don’t say to Black people or people of color, ‘I’ve taken an African dance class or two or three.’ Or, ‘I’ve got some Black friends,’” he said.

Becky tried to apologize for the way the conversation went, saying, “OK, I’m just sorry,” before the teaser ended.

The cast, which also includes Andre Comeau and Julie Gentry, filmed in the newly remodeled original loft while Eric Niles shot from a hotel room after he tested positive for COVID-19. They previously told Us how race and changing culture would play a part in the reunion series, noting that they filmed the new season during the Capitol riots, which took place on January 6.

“We talk about this a lot. It’s about the same conversations … Nothing is going to change until that happens,” Eric told Us on February 25 about what transpired as the squad watched the event unfold on TV. “So I’m hoping that this, in some way, or whatever’s coming in the future, intuitively, that we can talk about solutions to these issues of separation and division.”

Stars Who Got Their Start on Reality TV

Heather, 50, noted that it was very interesting watching how everyone reacted to the pivotal moment in the United States’ history.

“We’ve been a part of some really interesting times in the world,” the rapper said. “I’m glad we were able to have these conversations together as a family, and it’s been great and I’m glad they were able to document it all.”

Becky, for her part, previously told Us that a lot has changed since the housemates were living under one roof in 1992. “It wasn’t just youth. It was also the times. We were a little wilder, a little freer,” she said in February. “We may not share the same views and we may have different ways or similar ways of handling things from back in the day and listening and talking about things and very different ways. We are different people. We’re adults. We’ve individuated. And that’s a good thing. That’s a healthy thing.”