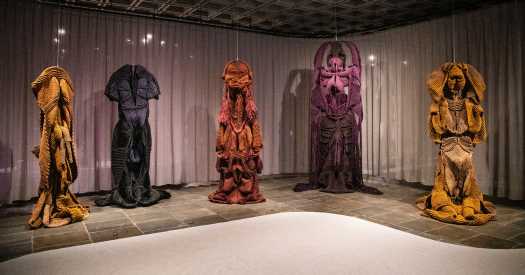 It’s been a while since I was last truly startled by contemporary sculpture, enough to make me wonder “How on earth did someone even think to do this, never mind do it?” But that was my reaction to “Phenomenal Nature: Mrinalini Mukherjee” at the Met Breuer.

Surprises start early. You step off the Breuer’s fourth-floor elevator and face a kind of proscenium-wide stage curtain. Made of a filmy mauve-beige fabric, its softness is the textural antithesis of gray-stone Breuer brutalism. When you go around it into the show, it’s as if you’re entering a theater from backstage. On the other side of the curtain, which turns out to form a continuous maze snaking through the entire floor, a drama is unfolding with a cast of some 50 awesome players.

Roughly half of them — free-standing, or suspended from wires, or hugging the floor — are hand-woven from dyed hemp rope worked in a knotted macramé technique of finger-aching ingenuity. The colors are vegetal: mustard, saffron, grape-purple. The forms themselves — pleated, folded, bulging — suggest human-scale insects, voluptuous without feeling warm, magnetic without feeling friendly.

Tucked into nooks and eddies in the labyrinthine curtain are smaller-scale ceramic pieces. Some, squat and busy, are like pots of bubbling organic matter. Others, flame-shaped and midnight-black, bring seated Buddhas to mind. Toward the end of the route comes a kind of a garden of cast bronze forms. Botanical and bestial merge. Bundles of palm leaves appear to levitate; a bare tree branch arches like a scorpion poised to sting. 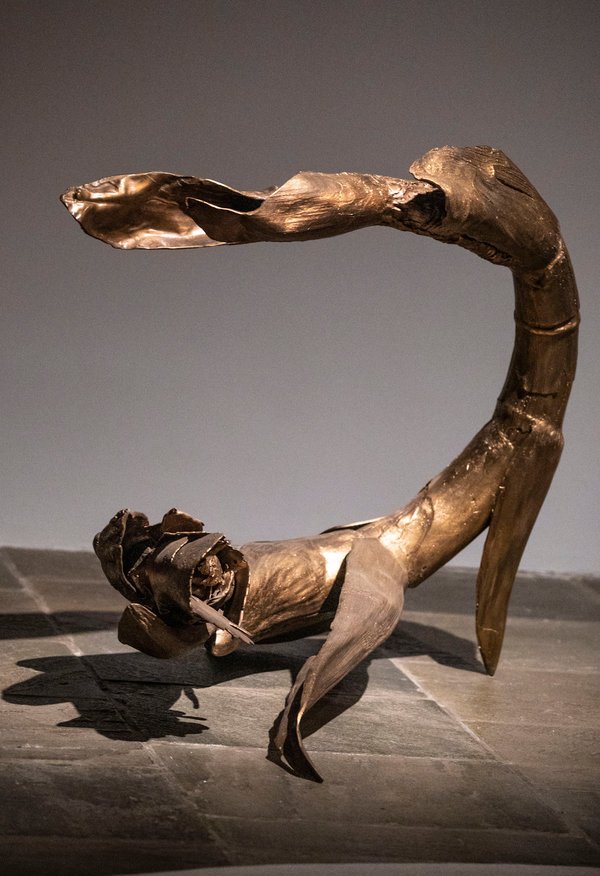 Mukherjee, who produced all of this work over a four-decade career, was born in Mumbai in 1949. Her mother, Leela, was a sculptor; her father, Benode Behari, a mural painter and an influencer in the history of Indian modernism. He studied painting at the university at Santiniketan, in West Bengal, and went on to teach there, counting among his students another important figure, K.G. Subramanyan, who later mentored the budding artist.

The early years Mukherjee spent at Santiniketan, with its famous “tree schooling” style (classes were held outdoors) and a curriculum giving equal weight to art, natural science and traditional Indian culture, had lasting effect. Still, when at 16 she decided to go to art school, she opted for the progressive urban Maharaja Sayajirao University in Baroda (now Vadodara), where Subramanyan was on the faculty.

With his cosmopolitan interests — Indian folk art, African sculpture, up-to-the-minute European painting — he was a stimulating guide. And it was while she was taking part in the school’s annual student crafts fair that she first tried weaving wall hangings from natural fibers, found that satisfying, and kept doing it, using traditional artisan materials and techniques to make full-on sculptures of a kind no one had ever seen.

It was a bravely idiosyncratic choice, as was her career-long insistence that she wasn’t making folk art, or design, or fiber art, or female art. She was using a pre-modern medium to make up-to-date art, period. Again, she was lucky to have the support of Subramanyan (1924-2016), who was particularly partial to oddball media. (His uncategorizeable ceramic reliefs were included in the 2017 edition of Documenta.)

After school, Mukherjee headed for the art community in New Delhi. There she met her husband, the architect Ranjit Singh, and gained a second mentor in Jagdish Swaminathan (1928-1994), a painter with a maverick’s temperament and an ethical and emotional investment in promoting India’s indigenous cultures.

But none of these contacts can explain the radical direction of Mukherjee’s work, which is organized more or less chronologically by Shanay Jhaveri, an assistant curator of South Asian art at the Met, within an appropriately unorthodox installation design by Alejandro Stein.

In the 1970s, using industrial hemp rope bought in bulk and inexpensive dyes, Mukherjee was producing wall hangings of ever larger size and with high relief elements. Several were commissions from Indian hotel chains, which brought her some money, but also encouraged a view of the work as a species of commercial handicraft.

Still, within the art world her reputation grew. The sheer formal daring of the large pieces, done without the use of preliminary sketches — they could take up to a year to complete — was undeniable, and forceful.

To assert the work’s sculptural identity, Mukherjee brought it off the wall. By the 1980s, she was weaving fully three-dimensional forms, human-size and larger, with semiabstract limbs, faces, and conspicuously, gendered bodies.

Many were titled with generic Sanskrit names for pre-Hindu nature spirits and fertility deities: Apsara, Yakshi, Devi. But while figures clearly referenced existing images found in classic temple carvings and common village shrines, they occupy a personal realm of their own.

Mukherjee insisted that neither she nor her art were religious in any conventional sense. She was just after what she called “the feeling of awe you get when you walk into the small sanctum of a temple and look up to behold an iconic presence,” and she extended “sanctum” to encompass “a church, a mosque, or forest.” Her visual triggers for awe can look freakish, even monstrous. But, when it comes to the sacred — which is what she’s really talking about — the line between freakish and sublime is slight in every culture.

In the mid-1990s, Mukherjee stopped doing fiber work because, she said, the materials she was accustomed to were suddenly hard to find. The hemp rope she liked had become adulterated with synthetic fibers; her preferred dyes had disappeared from the market. Possibly she was also tired of doing such time-eating work and wanted a medium that moved faster. She shifted attention to ceramics, and made different wonderful things.

Now back to learning-on-the-job student mode, she graduated from dirt-colored pots to platter-shaped pieces splashed with raucous glazes; to black figures likely inspired by Buddhist sculptures she saw in Java. Then, continuing on an autodidactic roll, she tackled bronze casting, the medium that had been favored by her sculptor-mother.

By now, mythological titles and references had been left behind. Nature, always a primary subject and source, was enough. For a 2013 series called “Palmscape” she gathered tree droppings — fallen leaves, broken stems, stripped-off bark — and cast them in bronze and produced work that had ties to the rural world she’d known as a child at Santiniketan. It was while rushing to complete a series of such bronzes for a career retrospective at the National Gallery of Modern Art in New Delhi in 2015, that she died, suddenly, at 65.

That show was well received, though that approval was a long time coming. Through much of her career, critics tended to praise or dismiss her for the same reasons. In Europe, where she spent some time, her art was embraced for being sensationally Other; in India, it was accused of trading in exoticism. A major fiber sculpture at the Breuer, “Yakshi” — a generic name for a female earth spirit — from 1984, recently entered the permanent collection of the Museum of Modern Art and will be included in its grand, institutionwide re-installation next fall. I’m already wondering how and where it will be positioned, what context it will appear in.

But my immediate question after seeing the Breuer show was simply: when did this artist ever rest? The sheer amount of energy generated by her formal inventiveness, self-developed virtuosity, pre-postmodern thinking, and un-Modern emotion makes for one of the most arresting museum experiences of the season. It is an astonishment.

Holland Cotter is the co-chief art critic. He writes on a wide range of art, old and new, and he has made extended trips to Africa and China. He was awarded the Pulitzer Prize for Criticism in 2009.