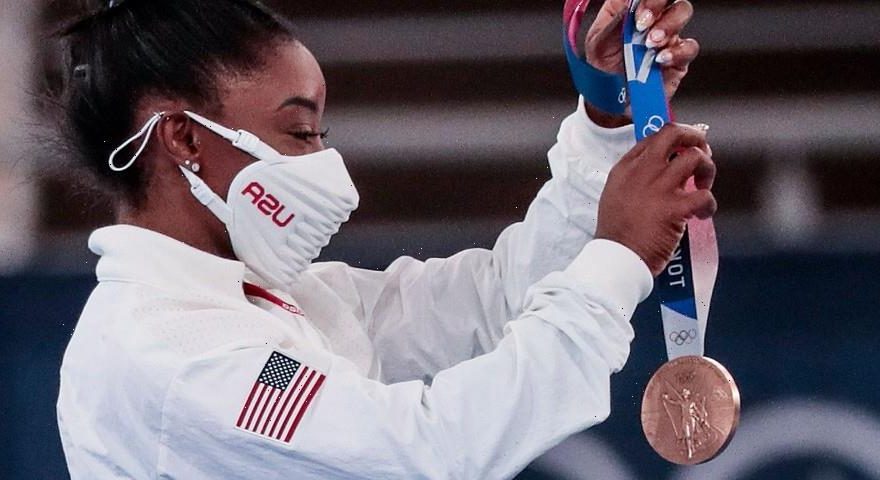 Simone Biles won the bronze medal in the balance beam final after returning to the Tokyo Olympics on Tuesday.

Competing for the first time since withdrawing from the team and individual all-around competitions last week, Biles took home her seventh career Olympic medial, matching Shannon Miller for the most by a Team USA gymnast.

Biles earned a score of 14.0 — 6.1 points for routine difficulty and 7.9 for execution — initially placing her behind China’s Tang Xijing, who scored 14.233, with five competitors left to compete. Ultimately, Biles finished in third place after China’s Guan Chenchen took the gold with a top score of 14.633.

“It meant the world to be out there,” Biles told USA Today. “I wasn’t expecting to walk away with a medal. I was doing this for me, and whatever happens happens.”

Last week, Biles made the decision to withdraw from the team final to prioritize her mental health. She then later pulled out of the individual all-around competition, as well as individual finals for the vault, uneven bars and floor exercise, for the same reason. Jade Carey, who finished ninth during Team USA qualifications, replaced by Biles in her absence.

Following her departure last week, Biles told NBC’s TODAY‘s Hoda Kotb, “Physically, I feel good, I’m in shape. Emotionally, that kind of varies on the time and moment. Coming to the Olympics and being a head star isn’t an easy feat, so we’re just trying to take it one day at a time and we’ll see.”

After taking home the bronze medal on Tuesday, USA Gymnastics expressed its pride in the four-time Olympic gold medalist on Twitter, writing, “Leading by example. Simone Biles closed the show with a (bronze medal) at the Balance Beam Final today!”

In more Olympics news, there is now a petition to make the Yu-Gi-Oh! Trading Card Game an official sport at the Games.
Source: Read Full Article