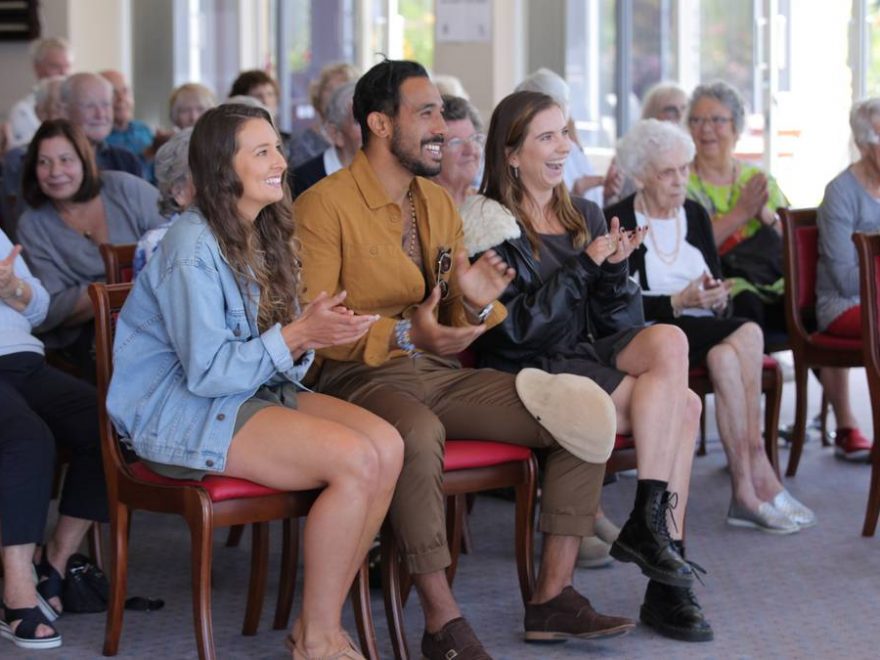 As we began episode 13, I found myself slightly sad about this being the second-to-last episode, that was until Moses came out with a banger of a bombshell.

“Being in love is honestly one of the best feelings.” My ears perked up, is Moses falling in love with Annie, Shenae or Lana? Say it isn’t so?

It was time for one last cocktail party with the three musketeers and to describe it as awkward would be an understatement. Annie and Moses went for a chat and she told the confession cam: “I really, really like him, he makes me feel good in so many ways.”

They went back to the “party” although I’m not sure you can even call it that since there were only four people, perhaps an intimate gathering is a better description? And after the awkward small talk, we finally got the rose ceremony we had been waiting for.

Annie, of course, got the first rose and with a heavy heart, we said goodbye to Lana, who said she knew she was going to be the one going home. Shenae, however, declared: “I’m petrified but I’m all in.”

Then it was time for one last group date, where Moses rolled up in a Cruella de Vil style classic car and everyone squeezed in the backseat. Moses had his arms around both the bachelorettes and created a moment more awkward than the cocktail party.

He told them he was taking them to see his friend perform but he forgot to mention he would also be performing a romantic original song he wrote especially for Shenae and Annie.

Ooh la la, I need to find a boyfriend like Moses to serenade me.

“Nobody’s ever written a song for me in my life,” said a gobsmacked Shenae while Annie struggled to say anything.

“Shenae was looking at me but when I look at Annie it’s like she couldn’t, it’s almost like it was too confronting,” said a clearly disappointed Moses.

Shenae looked at Moses like she was madly in love and Annie eventually told Moses, through tears, how beautiful his performance was.

“If I get my heart broken then that’s okay but I will be giving this my all now,” Shenae then very sweetly told the confession cam.

After the awkward group date, Shenae and Moses went to meet his family but only after a hot and heavy smooching session.

I can’t believe how freely he is giving out kisses now. Moses, where was this energy four episodes ago?

Shenae may have disappointed Moses’ family when she said she didn’t know he was a world-renowned singer but found redemption during one-on-one time with Penina, Moses’ mum.

Shenae said she would be thankful to have a partner with a big family as she doesn’t have one and when asked how she would feel if she didn’t get a rose, Shenae had the perfect answer: “I would be devastated but if it’s not me then that’s okay.” Penina declared: “I can see what he likes in her.”

Was that mum’s approval? Well, there wasn’t enough time to tell as we cut to Annie meeting Moses’ friends Storme, Tai and Sam.

Storme took notes on his phone as the lads asked Annie a series of questions, one of which being how badly do you want to be the last one. Annie responded: “I really, really like Moses a lot and I would love the chance to date him in a normal environment.” That earned points from the boys, as did staying tight-lipped on whether she had kissed the charming Bachelor.

The girls did a switch-a-roo and it was Shenae’s turn to be interrogated by the lads. She told them: “I’m honest, very loyal and I think I’m quite giving.” Storme liked that and when asked if she had kissed the Bachelor, she said yes because, well, she’s honest.

Moses, the funny guy, introduced Annie to his family: “Hi everyone, this is my next girlfriend.” Annie was anxious his family would perceive her as a nervous wreck but her alone time with Moses’ mum and sister appeared to go well. She told them how she has a deeply spiritual and sensitive side to herself which helps her connect with Moses.

At Storme’s next hilarious interrogation, he asked Shenae how many kids she wants and she gave an impressive answer: “I’m an only child and I definitely want a big family.”

Shenae and the boys went to the gathering at Moses’ house and things got serious when Moses asked the lads who they like better. Sam liked Annie’s energy, Storme could see Moses with Shenae – and we obviously now agree with everything Storme says – and Tai decided Annie would be the most compatible with Moses.

Moses said goodbye to Shenae and Annie and after a lovely day had a shock revelation for confession cam.

“I’m tossing up the idea of choosing no one. I came in with no one and if I leave with no one, it’s okay.”

The cliffhanger endings never stop. See you tomorrow for the finale.

• The Bachelor New Zealand airs at 7.30 pm Monday, Tuesday and Wednesday on TVNZ 2, and tune in to hear Sol3 Mio weekday mornings on Flava’s breakfast show.

Can’t get enough of The Bachelorette NZ on TVNZ 2?

Catch up with ZM’s Carwen Jones and Celia Whitley as they break it all down in the official podcast, Can I Steal You For A Second? After each episode airs, join the girls as they do a recap and dissect what’s going on. They’re the binge-watching friends you never knew you needed.