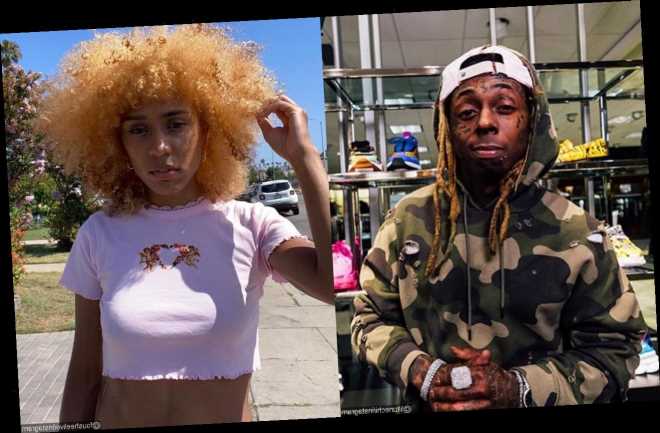 The singer, who was previously featured on the New Orleans-based rapper’s latest single ‘Ain’t Got Time’, reveals that she got his verse after showing him the song in person.

AceShowbiz –Lil Wayne and Foushee have treated fans to a new collaboration. The New Orleans-based rapper and the “Deep End Freestyle” songstress, who previously worked together for his latest single “Ain’t Got Time”, collaborated once again for her new song called “Gold Fronts”.

The 38-year-old MC announced the release of its music video via Instagram on Monday, March 29. Sharing a part of the clip in which he rapped his verse, he exclaimed, “Video OUT NOW!!! @fousheelive ‘GOLD FRONTS’ ft Me!!!!”

Also celebrating the new song release was Foushee. Posting the footage on her own Instagram account, she declared, “GOLDFRONTS ft @liltunechi out now. this one special… thank you team!” She followed it up with another point of the clip by writing, “@liltunechi they can’t take our gold fronts!!!!”

“Gold Fronts”, which is created as if it talks about grills, narrates the experience of Black people in the United States. It also tells about how 2020 has affected many people’s mental health like depression as Foushee rhymes about self-medication. Wayne then joins in and harmonizes with the singer during her chorus.

When opening up about her collaboration with Wayne, Foushee revealed that she got his verse after showing him the song in person. “It started with Wayne DMed me, just showing love,” she told Zane Lowe on his Apple Music’s show. “I threw out the idea to work and he was with it. And I was so shocked. This is someone that I listen to him. I was just like… This is what a lot of those moments where I’m just like… There’s nothing like…. I got my sound effects too. That was planned. Yeah. So he agreed to work.”

“I went to Miami, I got there. It was just like, ‘What we working on?’ And I was so shocked because I’m like, ‘What? What? No, wait, wait. I’m just a bit like, can I just play some music first off?’ Played him a whole bunch of music,” the alternative artist continued. “He played me some music. And I was like, ‘Wow. Can I do something to one of your songs?’ So I ended up recording to his songs and it took me so long to write. Because I was just like sweating.”

“I had this birthday party. And it’s just such a beautiful night. We were linking up for the first time in a long time, just very intimate birthday party. And then he just texted me. He just texted, words, right here. Whoo. I was like, ‘Wait. No, no, no.’ I was playing music. I’m like, ‘Everybody, I’m going to play this song right now.’ And we all started running and screaming,” she went on recalling. “He didn’t even start the real s**t. We’re just like, ‘Oh. Yeah.’ “

Foushee admitted that she was thrilled upon hearing Wayne rhyming the lyrics. “I thought it was the most beautiful verse I heard from him from a long time. I thought he really put his heart and soul into that. And it was a different side of him that we haven’t seen in a while,” she pointed out.