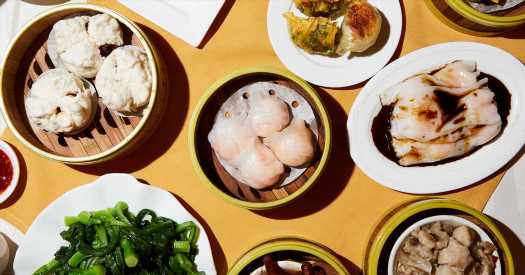 In this series for T, the author Reggie Nadelson revisits New York institutions that have defined cool for decades, from time-honored restaurants to unsung dives.

You have to get to Jing Fong for the dim sum brunch as soon as the restaurant opens at 9:30 on Saturday morning. An hour later there will be a line snaking down from 20 Elizabeth Street to Canal Street, customers anxiously inspecting the numbered tickets they’ve been given as they anticipate the dumplings, the pork buns, the sticky rice wrapped in lotus leaves, the fish balls and shrimp balls, spring rolls and steamed spareribs. My friend Dawn Delbanco, a Chinese art professor, has come with me. She is a woman who knows her dumplings. 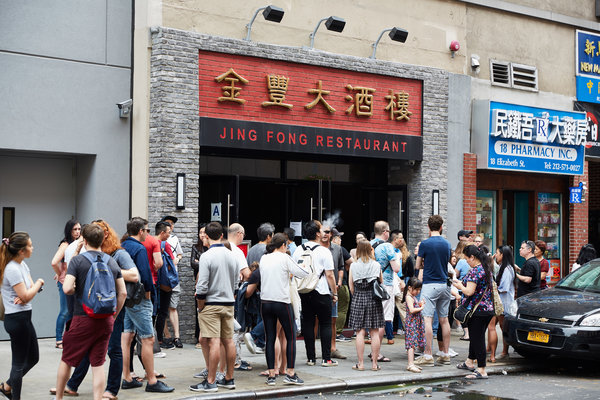 We’re in. Whisked up by the steep escalator to the third floor where the vast restaurant — 18,000 square feet of red and gold with glittering chandeliers — seats 800. There are older dumpling parlors in Manhattan’s Chinatown but, for me, there are none better, none that more completely evoke the dim sum palaces of Hong Kong. For one thing, it is very, very noisy. Dawn, whose parents were from Hong Kong and who as a child often visited the island, recalls the “earsplitting noise” of those restaurants. “The Cantonese are not soft-spoken, and there would be dozens of young women with trays of food weighing perhaps 50 pounds on a strap around their shoulders and yelling out the offerings. The families were all yelling, too,” she says, examining the delicacies as the food carts fly by.

In 1978 Jing Fong opened at 24 Elizabeth Street with only 150 seats. Its early years were tangled up in lawsuits and union problems, in a city bleeding from crime. The gang violence in Chinatown was lousy for business; centered on Doyers Street, it spilled over into the whole of the neighborhood. In spite of a good deal of nostalgia for New York in the ’70s, it was a miserable time in the city.

Jing Fong is simply a name the original owners came up with, perhaps because it had good feng shui and means “golden wind,” in Cantonese, says Claudia Leo, one of the restaurant’s executives. In the ’70s, everyone in Chinatown needed some luck. In 1980, after the original owner went bankrupt, Jing Fong was rescued by the Lam family, beginning with Shui Ling Lam (known as Grandpa Lam). A master plumber, he bought the majority share of the restaurant and in 1993 moved it to the current location at 20 Elizabeth Street. In 2007, Grandpa Lam passed the restaurant to his son, Ming Lam; Ming Lam’s son, Truman, came into the business three years later. It’s now a thoroughgoing family affair.

A good-looking, hip, slightly shy guy, Truman Lam is the one member of the third generation of Lams to work at Jing Fong. He went to N.Y.U. and then worked in investment banking, but when his parents took over Jing Fong from his grandfather, his mother asked him “to help modernize the computers and I got sucked in,” Truman recalls. “This is way more stressful than investment banking, where you worked maybe 60-plus hours, but the worst case scenario is you get fired,” he says, “We have 180 staff, 140 full time and if something happens, it’s you who fixes it.”

The changing patterns of Chinese immigration to New York also worry Truman. The trend now, he notes, is for new Chinese arrivals to go to Sunset Park in Brooklyn or Flushing in Queens, rather than Manhattan. And there are hard-core foodies who insist there are dim sum joints in the boroughs as good as or better than those around Elizabeth Street, but Truman is a steadfast Manhattanite who rides his bike to work from his home in Battery Park City. (Jing Fong now has a location on the Upper West Side, too.)

I’ve been eating in Manhattan’s Chinatown all my life. For me, it’s about strolling, as we did when I was a kid, from the Jewish neighborhood (lox, knishes) to the Italian (Mozzarella, cannoli) then to Chinatown; to me, dim sum is best eaten with family and a load of friends sprinkled with soy sauce. Of the great 20th-century ethnic neighborhoods, Chinatown is the only one that has really grown over the years. Plunge down Bayard and Pell Streets, buy a bag of fresh lychees and you feel you have left the country, what the French call dépaysement.

As the morning wears on, Jing Fong fills up, packed with families, grandmas, couples, teenagers, kids. Truman recalls that when, for a time, his family lived on Long Island, he loved coming here for brunch because he saw all his cousins.

The buffet is open, lavishly laid out with myriad hot dishes. Carts of beer and wine arrive. More and more carts fly by as if on a Formula One course. Dawn is watching closely for the har gow, shrimp dumplings in a woven bamboo basket.

Har gow is the standard by which dumplings are judged, they are the great test of a dim sum chef, says Dawn. The rice flour covering, sometimes called a shrimp bonnet, has to be delicate, transparent and smooth in texture but with up to 10 tiny “pleats.” It must not break when you pick it up. It must be light, and the filling of shrimp just enough for a single perfect bite. Succulent yet fragile, Jing Fong’s are the best in Manhattan and, dare I say it, the entire city.