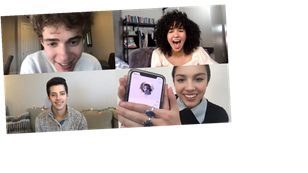 If you thought the soundtrack for High School Musical: The Musical: The Series season one was good, just wait until you hear the music for their holiday special. Ahead of the special’s premiere on Disney+, POPSUGAR had stars Joshua Bassett, Olivia Rodrigo, Sofia Wylie, and Matt Cornett test their knowledge to see how well they remembered all the tracks from the first season.

In addition to guessing lyrics from the High School Musical movies . . .

. . . They also had to guess lyrics from the original songs featured on the show, including the ones Rodrigo and Bassett wrote.

Let’s just say they pretty much aced it, proving they’re true Wildcats at heart. Watch the fun video above and be sure to tune into High School Musical: The Musical: The Holiday Special, which is now streaming on Disney+.