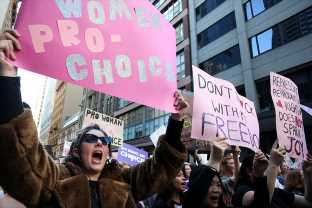 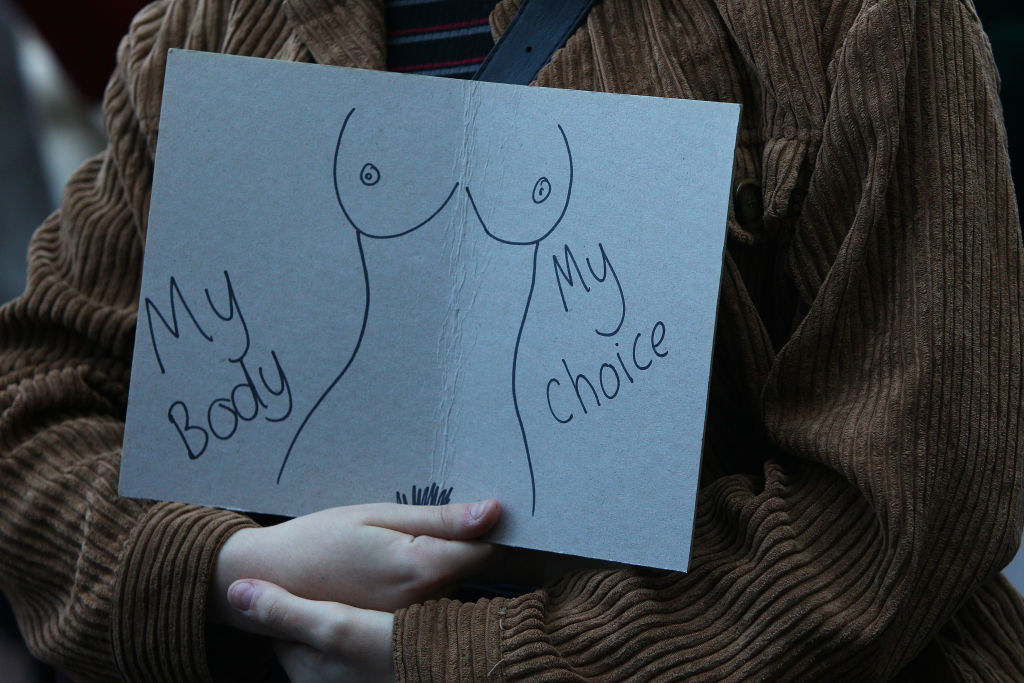 Sign at a rally for reproductive rights in Sydney, Australia, 2019.

Two years after her fiancée died, Ellen — a pseudonym to protect her privacy — took a holiday.

“I was on this cruise with my best friend and I’m a lesbian, but we were drinking a lot,” the 33-year-old Melbourne woman tells BuzzFeed News. “I just wanted to escape my life completely and I couldn’t face the idea of being with a woman.”

Ellen spent a night on the ship with a man she had just met. “I don’t even know his last name,” she says. It was the first person she had slept with since the death of her partner of 10 years.

“I didn’t even think about contraception and neither did he,” she says. “I left the boat and actually went into a psych ward because I was suicidal at the time.”

Ellen began to feel tired and moody and realised her period hadn’t come, so she went to the hospital’s pharmacy to buy a pregnancy test, which returned a positive result.

“I felt so vulnerable and like I’d completely fucked up, and because I felt so guilty I told myself ‘Well I could feasibly [raise a child] alone’,” she says.

But Ellen ultimately decided to have an abortion, which she now believes was “the right thing”.

One of the hardest parts of the process for Ellen was telling her parents she was pregnant.

“They took so long to settle with the fact that I was gay, and then I’ve gone and had sex with a guy while I’m grieving my dead partner,” she says. “They are amazing parents, but it was like I’d already signed up to an identity so I couldn’t really talk about it.”

Medical abortion drugs were an option for Ellen as she was at a very early gestation, but she chose a surgical abortion because she wanted to wake up and “for it to be done”.

“I was very lucky,” she says. “I just made an appointment and I had top tier health insurance that completely paid for it.”

None of the healthcare professionals Ellen encountered made her feel ashamed, however her Catholic upbringing had left her predisposed to feeling “guilt”.

“I’ve devoured personal stories about abortion since then,” Ellen says. “I’d really internalised the idea that if you’re pro-choice [abortion] is like a transaction, which isn’t the case at all.” 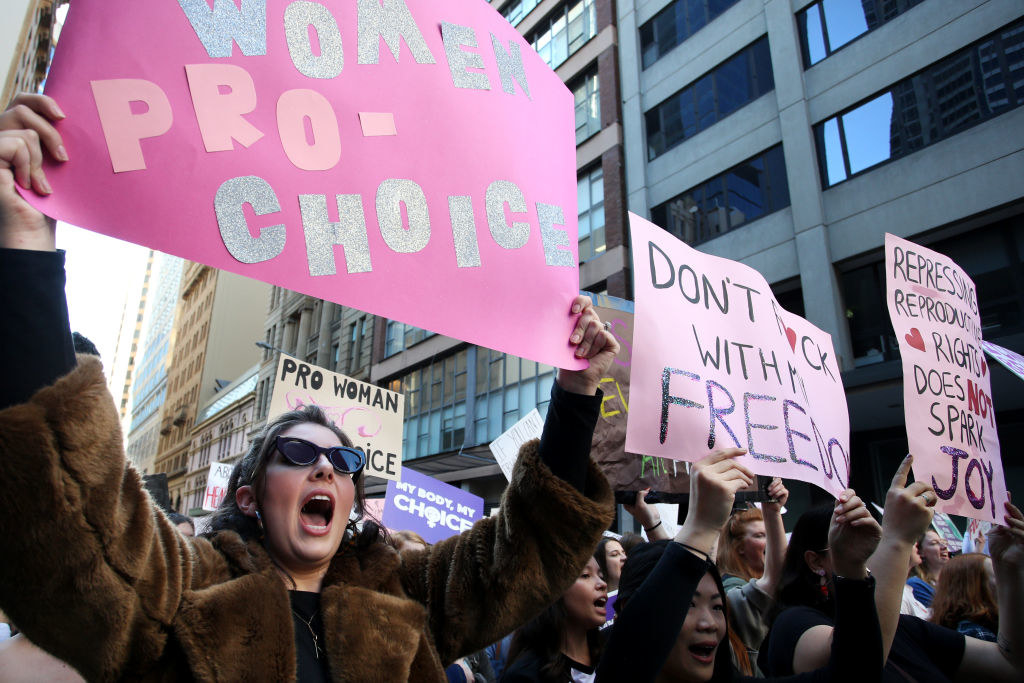 Signs at a rally for reproductive rights in Sydney, Australia, 2019.

Bree fell pregnant to her high school boyfriend when she was in Year 11 at a Canberra high school.

“He was the first person I’d ever had sex with and not that he misled me at all, but I wasn’t as experienced and I didn’t really know how to access reliable contraception by myself,” the now 27-year-old tells BuzzFeed News. “I was literally the stereotype of who everyone thinks accesses termination services.”

Bree rang the only abortion clinic in the Australian Capital Territory and booked in for a surgical abortion.

“I took a fake sick day and forged my dad’s signature on my sick note,” she says. “My boyfriend paid for it and it was about $450.”

It was “always” the only decision she was going to make, Bree says, but she still has complicated feelings about ending the pregnancy.

“Sometimes I’ll be in the shower or sitting somewhere and I’ll imagine what life would be like if I’d gone to term with the pregnancy. I would have an almost 10-year-old child with me. I’m not stricken with grief but it is just one of those things I think about.”

Bree believes there is no way to acknowledge the complexity of her feelings without reinforcing narratives spread by anti-abortion activists. She doesn’t want her story to be misappropriated by lobbyists who argue women are left with lasting psychological damage after the procedure and suffer from “post-abortion syndrome”, a discredited condition widely rejected by scientific research and medical professionals.

“Any sign of weakness is co-opted by a narrative that I don’t want to contribute to because I’m not grieving for the child I could have had,” she says. “Reducing it to a decision that you have to be 100% comfortable with really erases the experience of people who — for whatever reason — need to terminate a pregnancy but who would, in other circumstances, have kept it. It doesn’t leave room for people who have conflicted emotions about it.”

Bree wishes more than anything that she could talk to her mother, a Christian, about her abortion.

“I would really love to not have that secret between us,” she says. “I wish I could talk to her without feeling like I could be judged for it, or without hurting or upsetting her. I think it would probably break her heart that I went through that alone because of the opinions she held.” 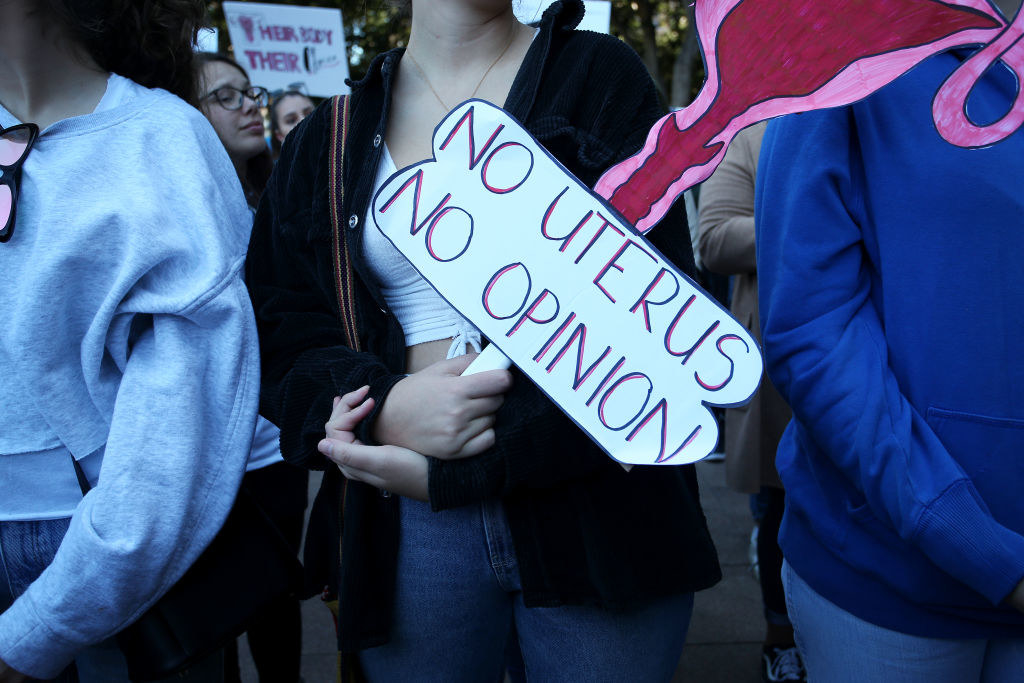 Sign at a rally for reproductive rights in Sydney, Australia, 2019.

For years after she had an abortion, Winona resented pregnant women and couldn’t stand being around small children.

“I felt so horrible about what I’d done that it seemed to me no-one should do it,” the now 39-year-old tells BuzzFeed News. “I was filled with anger at myself, my partner, the clinic, the world.”

The Newcastle woman says she found out she was pregnant a few days after her 24th birthday.

“I was drinking too much, smoking, not working… it was basically a disaster and not a good time to have a baby,” she says. “I struggled with the idea of giving up smoking and drinking and it all coalesced into a maelstrom that swept me along to the abortion clinic.”

The man involved in the pregnancy was “adamant” that Winona have an abortion.

“I’d actually grown up thinking abortion was wrong, but by my twenties I’d decided I was going to hell anyway,” she says.

On the day of the abortion Winona says she still felt undecided, and after the abortion she “screamed and cried and prayed she could go back to that morning” and make a different decision.

“I’d like to see abortion legalised in New South Wales so we could actually have a law making it illegal to coerce someone into having one,” she says.

Winona now identifies as pro-choice: “It simply means believing a woman has a right to decide what happens to her body, including any pregnancies.”

This shift “ironically” came about a decade after her abortion when Winona gave birth to her son — “a healthy and adored child who was wanted and the result of a planned pregnancy”— which was a “horrible” birthing experience.

“Having lost control of my body, I knew I could never again do anything that would take away another woman’s right to her body,” she says.

“A person can’t be compelled to donate blood to save another life, we don’t even take organs from dead people without their advance permission,” she says. “Why should a dead person have more bodily autonomy than a live pregnant human?”

All women in this story have requested pseudonyms to protect their privacy.

Gina Rushton is a reporter for BuzzFeed News and is based in Sydney.