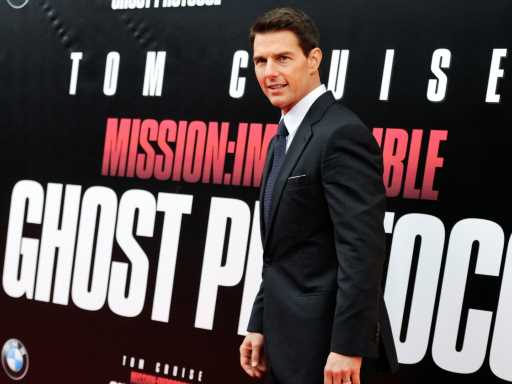 In October, fans started speculating about Tom Cruise’s face because he looked completely different than we are used to seeing him. He didn’t look like himself and of course, that’s when the plastic surgery rumors started to leak out. But it felt like an uncomfortable topic to be speculating about given the fact that the Jack Reacher star is 59 years old and he should be allowed age gracefully.

Well, one month later, Cruise was spotted on the set of Mission Impossible looking every bit like the Tom Cruise we all know and love. (See the photos HERE.) Hopefully, that will put everyone, who questioned that the Top Gun actor was at the World Series game in the first place, at ease. In October, ESPN reporter Molly Knight didn’t believe it was the A-list star, tweeting, “Gonna spend the rest of tonight and all of tomorrow wondering if some random dude convinced the Giants he was Tom Cruise.”

That led to The Sun throwing out several different theories like spaghetti to a wall, hoping one of them would stick. “Tom definitely looks swollen and puffy, which could be due to filler, post-procedure swelling, or weight gain,” Medical expert Dr. Alice Henshaw told the U.K. publication. “Often, surgical procedure such as a platysmal plasty, or neck lift, combined with a mid-facelift could create this type of swelling in these areas, and scars are easily disguised.”

So, everyone can calm down now. Cruise looks like his movie star self again — and whatever was the issue last month (aka none of our business) —  we don’t need to worry about it anymore.

Before you go, click here to see some of the most dramatic celebrity transformations of the past decade.