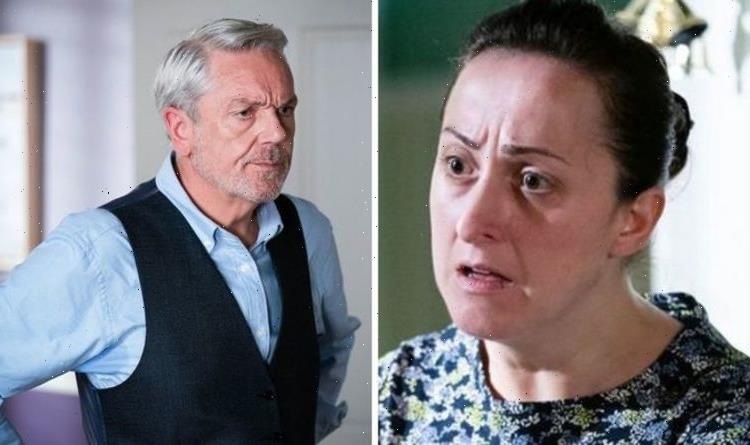 EastEnders: Janine is turned down for job by Suki

Terry (played by Brian Conley) has been scamming Sonia (Natalie Cassidy) for months, pretending to be her dad to get a share of her inheritance from Dot Cotton (June Brown). The only other person involved in the cruel scam is Dotty Cotton (Milly Zero) who is in on the plot and has revealed in scenes that Terry is in fact her uncle Tom. Wracked with guilt, Tuesday’s EastEnders episode saw Terry unable to go through with the plan. He wrote out individual letters before getting up to leave, but he fell to the floor clutching his chest. It seems Sonia is going to find out the terrible truth, and in a heartbroken state, she might let the man she believed to be her dad die.

While Terry wrote the letters, Sonia had been throwing a birthday party for him.

He was stunned to turn up to his party and find out Sonia had guessed his date of birth from her mother’s behaviour each year on the date.

She gifted him a sentimental collection of items she’d placed away for him as a child, as well as a watch emblazoned with ‘world’s best dad’.

Terry seemed to realise how far his trick had gone and decided enough was enough.

When he first found out about the party, Terry told Sonia: “I still can’t believe you remembered.”

“Well, blame mum,” she replied. “She sort of drummed it into us.”

Sonia explained: “Every year, once a year, she’d wake up in the most terrible mood and I’d know – must be dad’s birthday.”

As she handed him the box, the Walford nurse added: “That is why I hid these.”

She continued: “I used to save them for you. One a year – free inside a chocolate egg.”

If she explains she is celebrating her dad’s birthday and sends her mum a photo, Carol might inform her that he isn’t her father.

Speaking to Dotty during the celebrations, Terry stated: “I can’t do this.

“I’m celebrating a birthday that isn’t even mine.

“I told you, you can keep the cash.

“I won’t tell her what I wanted it for, I’ll just say it was for debts or something – I won’t mention you at all.

After Sonia gave Terry the watch, she told him: “I’m proud you’re my dad, and I’m proud to be your daughter.”

Later, he sealed envelopes to both Sonia and Kathy from Sonia’s home.

Leaving the watch, he got up and began to cry, before coming over in pain and collapsing to the floor.

If Sonia had been in touch with Carol while Terry wrote the letters, she could possibly have been on her way to the house to confront him.

Discovering him on the floor in pain, with the letters on the table, will she decide to leave him for dead?

The news is bound to be a huge shock to her, and she had only just begun to trust that Terry had the best intentions by turning up in her life.

It would be out of character for the Walford favourite to abandon someone needing help, but in her crestfallen state, it’s possible Sonia will allow Terry to die.

She might take a glance at him before leaving the house and not informing anyone Terry is in trouble.

Could the long-running scam end in tragedy as Terry dies before he can express his remorse?

EastEnders continues on Thursday at 7.30pm on BBC One.