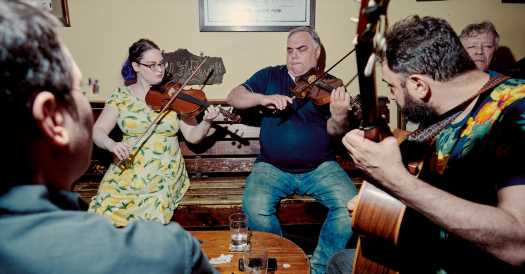 The Tradfather was holding court at the 11th St. Bar in the East Village during a pause between jigs when his mood temporarily darkened. Amid the small cluster of regulars who flock to this live Irish music session on Sundays was a newcomer who, beer in hand, was flirting with one of the musicians.

“She’s playing,” the Tradfather cut in, jabbing his fiddle bow in the air. “We’re not talking,” he added, inserting an expletive for good measure. Then he put bow to string and started on a jaunty hornpipe.

The fiddler’s real name is Tony DeMarco. In a former life, he was a commodities trader, but over the past 30 years he has become the central figure of the Irish traditional music scene in New York and one of its few members to pursue this art full time. Brooklyn-born, of mixed Italian and Irish descent, DeMarco is one of the foremost practitioners of Sligo fiddle playing, a regional style characterized by busy fingerwork, baroque ornamentation and frequent blue notes. Among fellow musicians, who revere his technique and fear his tongue, he is known as the Tradfather of the New York sessions scene. 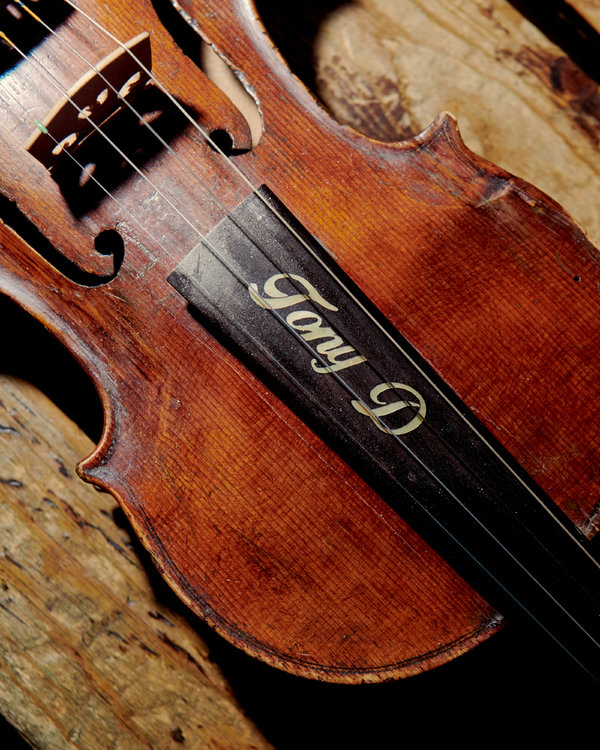 Sessions are the lifeblood of Irish traditional music. Though they vary in size, quality and instrumental makeup, the format is fixed: a regular musical gathering in a bar, anchored by one or two musicians who are paid — sometimes only in drinks — to play. Friends join in by invitation; visiting musicians from out of town might show up, too, unpack their instruments and sit in.

In Ireland and throughout the world, sessions act as a training ground and a social network for practitioners of this centuries-old musical tradition. It’s this communal form of public performance, in a familiar atmosphere with drinks and stories mixed in, that keeps this tradition afloat and preserves its regional styles, along with tens of thousands of tunes. “The session nourishes the community and it nourishes the art form by keeping a very large repertory alive,” Mick Maloney, a singer, banjo player and professor of music at New York University, said in a telephone interview.

There are many paths to technical mastery, including private lessons, group classes and YouTube tutorials. But at some point, Maloney said, you need to sit in with a group and learn “body to body.” There’s no other way to become fluent in the wordless communication among players: the subtle cues of the leader, the amiable loop of melodies played in unison, the spark that ignites a flashy solo.

In the diaspora, sessions are also a means of preserving Irish identity. Leah Rankin, a rare cellist in the trad scene who is a manager at Carnegie Hall by day, said they were an example of “how specific cultures maintain their identities within the cultural fusion and conflation of New York City.” Creating a space for these traditions to be practiced, she added, “means providing a place for the identity to be preserved — and sometimes for people to even find their identity in the first place.”

A classically trained cellist, Rankin performs on a carbon fiber cello in pubs because beer spills pose a risk to her wooden instrument. She became hooked on Irish fiddle music through the work of Martin Hayes, an Irish virtuoso steeped in the sweetly lithe tradition of East Clare fiddle playing. “He was my gateway drug,” she said.

Hayes is a member of the Gloaming, a supergroup that unites some of the biggest names in Irish music and plays to capacity crowds in concert halls around the world. But, as Hayes said in a phone interview, concerts cannot replace sessions.

“If they weren’t here, the world of Irish music would be very disconnected,” he said. “It’s one thing to go and see a concert, but it is very instructive to have a continuous investigation with the music on a weekly basis.”

When in New York, he sometimes joins in the session at the Dead Rabbit near Wall Street on Sundays, or plays alongside DeMarco at 11th St. Bar. Yes, he says, background noise and chatter can mean that some of the nuances of the music are lost in a pub. But, he added, “musicians also like the fact that it’s not a gig and they don’t have to deliver. And one of the key elements in the creation of any music is the ability to be relaxed.”

At first glance, a session looks laid-back, spontaneous and open. Yet there are hierarchies underpinning both the citywide scene and each individual session. Some are bloated with beginners, compromising musical standards. And establishing your own session is a process.

Daniel T. Neely, a banjo player and ethnomusicologist (his expertise: Jamaican mento music), who said he was “press-ganged” by Maloney into playing in an Irish group, has published a set of rules for newcomers regarding egos and etiquette. No. 8: “There is a good chance that an eyebrow raised in your direction is consequential.”

DeMarco is more blunt. He’s been known to kick people out of his session with a sharp comment and to hurl expletives in the direction of landlords who want to keep bar TVs tuned to the sports channels with the sound turned off.

“Sometimes the fact that I look like an Italian Mafia boss comes in handy,” he said with a satisfied grin during an interview near his home in Little Italy. But, on the whole. he finds the sessions landscape in good health.

“In the ’70s, we used to be happy if someone would throw a pitcher of beer on the table, and we’d sit there and play all night,” he said, noting that paid sessions were now more common. “And there’s a ton of them.”