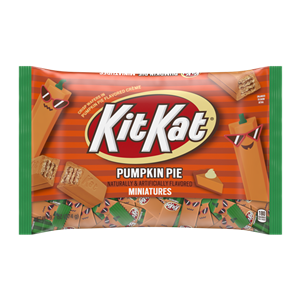 It may still be July, but many of us — myself included — are already preparing for fall’s arrival. (It is, after all, The Best Season. No argument. This is the hill on which I am willing to die.) As such, it’s not entirely unwelcome that news about this year’s crop of Halloween candy has already started to trickle out — and hey, guess what? I’ve got a good one for you: Pumpkin Pie Kit Kats are returning for Halloween 2019. Heck, and yes.

Positioning themselves as a actual pie-flavored treats, rather than just spice-flavored treats, Pumpkin Pie Kit Kats really pull out all the stops. Described as “crispy wafers in a pumpkin pie flavored crème,” they’ll be available in 9.7-ounce bags of individually-wrapped miniatures — and if the packaging image is anything to go by, those individual wrappings are notable all on their own: This year, they make each little two-piece bar look like an angry yet hip orange stick with punk-ish green hair and a badass pair of sunglasses. Here’s hoping that’s what the packaging actually looks like once these suckers are released. Each bag will retail for around $3.99, although prices may vary according to location; regardless, though, they’ll be available nationwide for a limited time.

Pumpkin Pie Kit Kats first debuted during the 2017 Halloween season, more than a decade after Starbucks brought the Pumpkin Spice Latte into the mainstream, but arguably when pumpkin spice fever was at its height. (Not that it’s really lessened much since then, but, uh… whatever.) In hindsight, it’s perhaps somewhat surprising that it took Hershey’s that long to bring the now-iconic fall flavor to its lineup; Kit Kats, after all, are well known for their ability to adapt to new flavors, particularly in the Japanese market. (You have not lived until you’ve tried a matcha Kit Kat.) At the same time, though, the wait was worth it — because when the Pumpkin Pie Kit Kat finally arrived, it quickly became apparent that Hershey’s had nailed it.

According to the Impulsive Buy’s 2017 review of the candy bar — which is so positive, it glows as brightly as a lit jack-o-lantern on a dark October night — the “cinnamon flavor takes a back seat to the ginger and nutmeg.” This results in a flavor that can sometimes shift over into “ginger snap cookie” territory; however, despite these brief forays into the world of crispy fall cookies, the overall experience of the candy is straight-up pumpkin pie — both in terms of smell and taste.

Junk Banter was similarly taken with the seasonal treat the year it debuted, praising it as “the best [Kit Kat] I’ve ever had.” According to the snack food site’s review, the wafers inside the Kit Kat effectively function as pie crust — specifically a “graham cracker crust,” rather than a pie crust of the flaky, buttery variety — which, texturally, contrasts beautifully with the “signature creaminess” of the candy coating. Junk Banter also called out that creaminess as “something you’d look for in your pumpkin pie filling and the mountain of whipped cream you’d smother it in” — so, y’know, score one for Hershey’s on mimicking not just the flavor of pumpkin pie, but the mouthfeel of it, as well.

The triumphant return of the Pumpkin Pie Kit Kat is, of course, not the only trick Hershey’s has up its chocolatey sleeve for the 2019 Halloween season; the company’s other offerings for this year include Reese’s pumpkins stuffed with Reese’s Pieces, the return of last year’s glow-in-the-dark candy wrappers, and a skull-shaped bowl filled with chocolate bars which will no doubt fill trick-or-treaters with ghoulish delight. Personally, though? I’ll be heading to the store to grab up some of those Kit Kats as soon as they’re available. They’ll only be around for a limited time once they drop, so make sure to grab ‘em up fast if you want ‘em. Happy not-quite-fall, fellow autumn-loving friends!