Welcome to Best of Late Night, a rundown of the previous night’s highlights that lets you sleep — and lets us get paid to watch comedy. If you’re interested in hearing from The Times regularly about great TV, sign up for our Watching newsletter and get recommendations straight to your inbox.

President Trump denied the columnist E. Jean Carroll’s accusation that he’d sexually assaulted her in the 1990s, saying: “No. 1, she’s not my type. No. 2, it never happened. It never happened, O.K.?”

“So, it didn’t happen because she’s not his type. That is the sound of a man realizing in midsentence that he’s not talking to Billy Bush.” — STEPHEN COLBERT

“If your denial leaves people thinking there is a type of woman you would rape, that’s not a good denial.” — TREVOR NOAH

“But it shows you how out of whack Trump’s priorities are. He’s being accused of rape and his first concern is letting people know what his standards are for women. It’s like you’re accused of murdering someone at a Holiday Inn and your response is, ‘I stay at the Ritz-Carlton!’” — TREVOR NOAH

“That’s not a defense — that’s a confession. It’s like if you ask Hannibal Lecter, ‘Did you eat that guy?’ and he said, ‘No, he looked a little bony.’” — SETH MEYERS

“It turns out you don’t really need your own communications director when you never actually, you know, communicate.” — SETH MEYERS

“It was a lovely ceremony today. When Sarah handed Stephanie the keys to the liquor cabinet, she was like, ‘Here, you’re gonna — you’re gonna need this. Trust me, don’t lose it.’” — JIMMY FALLON

“Yes, for the 22nd time, Donald J. Trump has been accused of sexual misconduct. Yeah. That’s almost one accusation for each Democrat running.” — TREVOR NOAH

“Trump’s headshot shouldn’t be hanging at the White House; it should be hanging at every Greyhound bus station in the tristate area.”— SETH MEYERS

“Hey man, who do you think is lying to us in this situation? All 22 women who have nothing to gain by lying and are showing incredible courage in the face of these kinds of attacks, or the known liar who called climate change a Chinese hoax, said three million people voted illegally in the last election and once told Eric Trump, ‘I enjoy spending time with you’?” — SETH MEYERS

What We’re Excited About on Wednesday Night 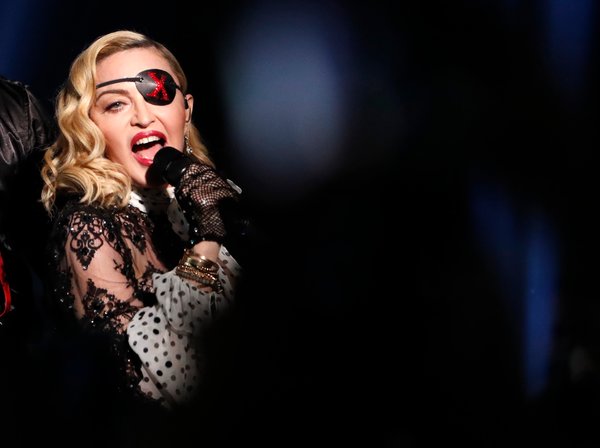 Madonna’s new album, “Madame X,” debuted at No. 1 on the Billboard 200. But it had some help: Her website offered free copies to fans who bought concert tickets or merchandise.