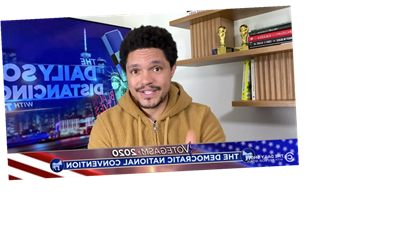 Since Sen. Kamala Harris (D-Calif.) was thrust into the spotlight as a candidate for vice president, conservative media personalities have launched an array of racist narratives, including questioning whether she’s “really Black.” Trevor Noah dove right in on “The Daily Show” on Wednesday night.

He showed clips of conservative pundits and allies of President Donald Trump questioning Harris’s heritage. This included radio and Fox News host Mark Levin, who felt the need to clarify to his viewers that she is not African American and that her “ancestry does not go back to American slavery”; right-wing radio personality Rush Limbaugh, who said Harris “doesn’t have slave blood”; and far-right provocateur Dinesh D’Souza, who said Harris could not claim to be descended from slaves because one of her ancestors may have been a slave owner.

“The Daily Show” episode aired just as Harris, whose mother immigrated from India and her father from Jamaica, made history as she formally accepted the nomination to be the Democratic Party’s vice presidential nominee, making her the first Black and Indian American woman to be on the ticket.

“OK, first of all, being partly descended from a slave owner is one of the Blackest things that can happen to you,” Noah said. “In fact, you know who was also the descendent of a slave owner? Frederick Douglass.”

He noted the paradox of Harris now being policed for not qualifying as Black given how that same marker was used by those who sought to oppress Black men and women and exclude them from white society.

“What’s especially ironic about these people trying to exclude Kamala from Blackness is that it’s the reverse of what white America did for centuries: defining as many people as Black as possible whether they wanted it or not,” he said.

Watch his full takedown on “The Daily Show” below.