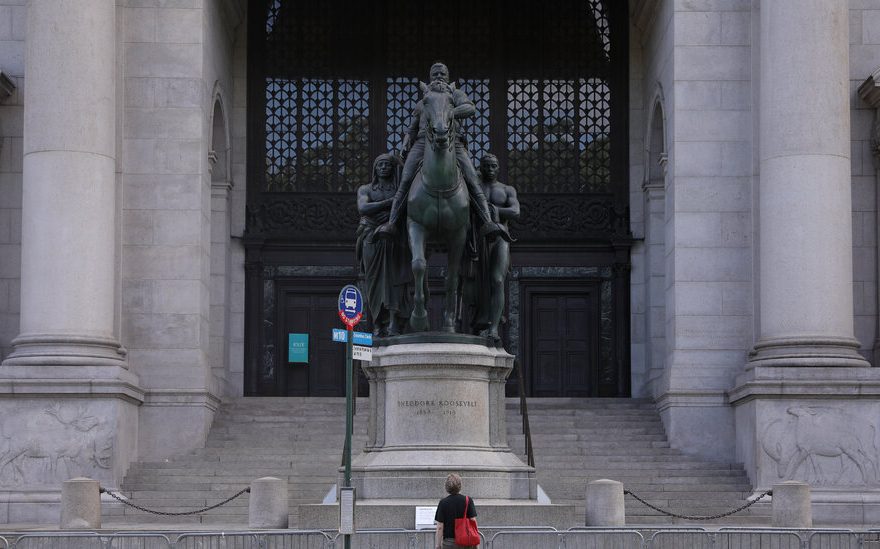 After more than a year of talk, it’s official: The Theodore Roosevelt statue in front of the American Museum of Natural History is coming down.

The New York City Public Design Commission voted unanimously at a public meeting on Monday to relocate the statue by long-term loan to a cultural institution dedicated to the life and legacy of the former president. (No institution has been designated yet, and discussions about its ultimate destination are ongoing.)

The vote follows years of protest and adverse public reaction over the statue as a symbol of colonialism, largely because of the Native American and African men who are depicted flanking Roosevelt on a horse. Those objections led the museum in June 2020 to propose removing the statue. New York City, which owns the building and property, agreed to the suggestion, and Mayor Bill de Blasio expressed his support.

In 2017, a mayoral commission set up to review city art, monuments and markers had considered historical research about the statue but could not reach a consensus on removing it.

“Height is power in public art, and Roosevelt’s stature on his noble steed visibly expresses dominance and superiority over the Native American and African figures,” the panel wrote in its report, delivered in January 2018.

At the time, about half of the commission wanted to relocate the sculpture, and about half recommended additional historical research before making a decision. Only a few members wanted to leave the statue where it was, if on-site context was provided.

At Monday’s meeting, made public as a YouTube video, Sam Biederman of the New York City Parks Department said that although the statue “was not erected with malice of intent,” its composition “supports a thematic framework of colonization and racism.”

The museum had spent years working with academics and advisers, both before and after the statue was considered by the mayor’s monuments commission. In 2019, that research culminated in an exhibition about the sculpture’s context and history — and how the public perceived it.

“The understanding of statues and monuments as powerful and hurtful symbols of systemic racism became even more evident in the wake of the movement for racial justice that emerged after the murder of George Floyd,” Dan Slippen, vice president of government relations at the museum, said at the meeting. “It has become clear that removing the statue would be a symbol of progress toward an inclusive and equitable community.”