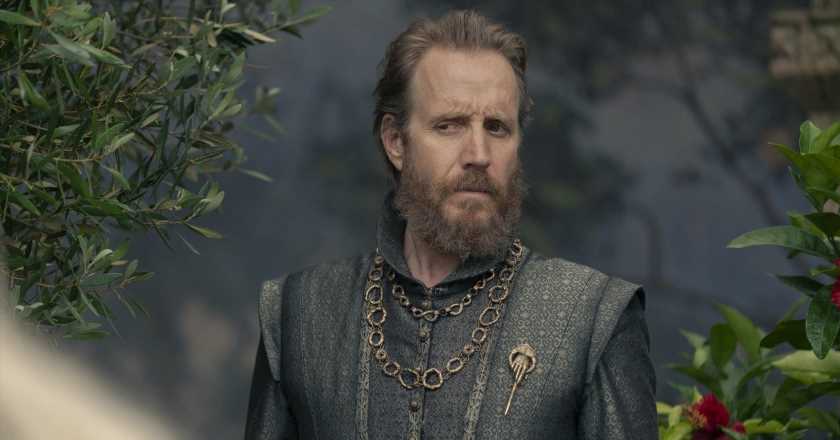 House Of The Dragon episode five is full of all kinds of drama, but looking back at the series so far, Otto Hightower has underlined himself as the most despicable character.

Warning: this article contains minor spoilers for episode five of House Of The Dragon.

We always knew House Of The Dragon would keep us up at night, mulling over fan theories, discussion points and general confusion, but more than anything, the series has made us do double-take after double-take with its characters.

We’ve been watching over the course of the five episodes and feeling with every fibre of our being that Daemon is the villain at the heart of House Of The Dragon. We’re thoroughly enjoying the memes coming out about him – there’s no denying that he really is a nasty piece of work.

But make way, Daemon – we have a new villain in town. Well, not new, but it’s becoming increasingly apparent that he might be the worst of the bunch.

House Of The Dragon: is Otto Hightower (Rhys Ifans) the true villain of the series?

Otto Hightower (Rhys Ifans) has been a thorn in everyone’s side since the first episode. He may have appeared well-meaning and a crucial source of support for a mourning King Viserys (Paddy Considine) in the wake of Queen Aemma’s tragic death, but he quickly revealed himself to be a Small Council member who would stop at nothing to further the standing of his own name.

House Of The Dragon is evidently a world where young women are played off as pawns against one another, the main example being Princess Rhaenyra (Milly Alcock) and Alicent Hightower (Emily Carey). From best friends to stepmother and daughter, it’s a bizarre turn of events orchestrated by none other than Otto himself. His nudging of Alicent to befriend and console the king was just the start of his ploy to get his daughter a royal title – and it worked.

Now Queen, we may see how Alicent is reckoning with her new title and relationship with Rhaenyra, but even in her new inflated position of power, her father is never far away to give her tactical and devious advice.

House Of The Dragon: Rhys Ifans stars as Otto Hightower.

House Of The Dragon episode 2: why Alicent’s betrayal of Rhaenyra is so heartbreaking

In the third episode, he went to great lengths to position his new grandson, Prince Aegon, as the rightful heir. He scoffed at Rhaenyra’s gender and her ability to take the Iron Throne as a woman (shock horror, right?), so in his pursuit of his own family’s royal ascension, he suggests that Rhaenyra could possibly marry her own two-year-old half-brother. It doesn’t bear thinking about, but at this point, we’re just not surprised by Otto.

His constant need to belittle Lord Corlys doesn’t go unnoticed either and he jumps at the chance to patronise the head of House Velaryon at every opportunity. Even in episode four, like a gossip-starved schoolboy, Otto runs to the king to talk about rumours circulating around Lord Corlys’s family – particularly Lady Laena Velaryon’s future marriage proposals. Again, it’s a tactical move to join the influential houses together, but Otto relishes the chance to use it as another reminder for Rhaenyra to marry – something she clearly doesn’t want to do any time soon.

If there’s ever a moment of Otto being evil, you can bet there will be a supporting line about his “duty” as Hand of the King. We get it – it’s a role he takes very seriously, and he protects the king with his life, but can you name a more slimy, two-faced character in the series? We think not.

Otto Hightower (Rhys Ifans) is the Hand of the King in House Of The Dragon.

In episode four, you can tell he rejoices in delivering the news to the King about Rhaenyra and Daemon being spotted in the pleasure house together. Knocking on the King’s door first thing in the morning, he says: “I apologise for the early hour, your grace. I have discomforting news. I thought it best shared discreetly before the council convenes. I’m afraid it concerns the princess, my King.”

He adds: “It is not easy to tell a father of his daughter’s exploits.” And even though the news is a serious matter, you can just tell – because he’s Otto, after all – that he doesn’t find it hard to spread gossip at all.

Saying this, Otto isn’t on our radar as much as usual in these recent couple of episodes, perhaps because we have lust, incest and other power-hungry males (once again) to contend with.

So when King Viserys aptly knocks Otto’s power trip down a peg or two in the fourth episode’s final scenes, we couldn’t help but let out a little squeal of happiness. And in episode five, we see him dismissed from King’s Landing altogether.

Rhys Ifans is Otto Hightower in House Of The Dragon.

The King surprisingly recognises that Otto has been playing them all in his own power game. He admits: “I will never recover from Aemma’s death, but Alicent, she took me through the worst of my grief – she was a calculated distraction. I only now realise how well calculated it was.”

And in finally hearing the line we’ve been waiting for: “You were a faithful servant Otto… but I can no longer trust your judgment,” you may feel a tiny pang of empathy for Otto. You may even feel for him when you see him packed up and ready to leave King’s Landing in the rain at the start of episode five. But his cutting final comments to Alicent are just a taste of what we’re sure will come throughout the rest of the series.

He tells his daughter that while his dismissal may be a decision she regrets and is upset by, it’s one that she ultimately made possible. “You chose Rhaenyra… You wanted to believe her, as did her father,” Otto says.

House Of The Dragon: episode five sees the dismissal of Otto Hightower but what does that mean for his daughter, Alicent?

Alicent finally calls him out on his relentless pursuit of Aegon taking the throne, but it’s a sentiment he won’t accept without clarifying his supposed logic. He explains: “Listen to me, daughter. The King will die. It may be months or years, but he’ll not live to be an old man and if Rhaenyra succeeds him, war will follow. Do you understand?

“The realm will not accept her, and to secure her claim, she’ll have to put your children to the sword. She’ll have no choice.”

Of course, talking about Alicent’s children being potentially murdered by their own stepsister is enough to leave her tearful, but he continues: “You know it. You’re no fool, and yet you choose not to see it. The time is coming, Alicent. Either you prepare Aegon to rule or you cleave to Rhaenyra and pray for her mercy.”

We may have seen Alicent in floods of tears while her father trots away on his horse, but something tells us to save the emotion because Otto is definitely not the character to put your faith in.

We’re sure that even from a diminished position of power, he will continue to wreak havoc in King’s Landing, both among the Targaryens and in pursuit of the Iron Throne – and that’s what makes him the perfect House Of The Dragon villain.