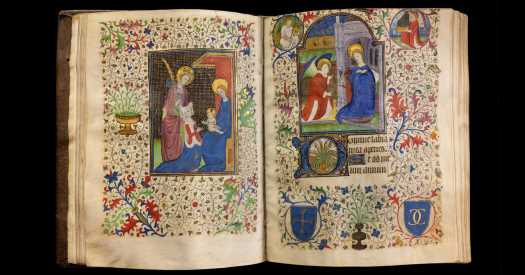 LONDON — A great drawing or painting isn’t always found in a frame: Sometimes, it’s bound in a book.

Original artworks in rare books and manuscripts dating back centuries will be among the items on digital display Thursday through Monday in this year’s European Fine Art Fair, known as TEFAF Online 2021. Organizers of the fair asked exhibitors to select up to three works that tell an interwoven story.

Four dealers in rare books and manuscripts shared the thinking behind their selections, some with price tags that top $1 million. They are Bernard Shapero and Stéphane Clavreuil, both based in London; Heribert Tenschert in Ramsen, Switzerland; and Jörn Günther in Basel, Switzerland.

Their comments, by telephone and email, have been edited and condensed.

How do you present rare books and manuscripts in a digital format?

STÉPHANE CLAVREUIL We provide the full description and as many photos as possible.

BERNARD SHAPERO We are lucky that books and prints are very conducive to online sales. We have been selling online for over 20 years, so we are well set up, with a finely tuned website and social media operating on a daily basis.

JÖRN GÜNTHER Although presenting the books and manuscripts digitally is very different to a physical fair, it is possible to get a feeling for the quality of the artworks through high-resolution images and the detailed descriptions in online viewing rooms. For TEFAF Online, we also publish a short video with commentary from our experts.

HERIBERT TENSCHERT One thing people really enjoy at an in-person fair is to be in the presence of these works of art. But with an online fair, we can engage the viewer with additional text, photos and videos to really tell the stories of these books in a multifaceted way.

So what are you showing this time?

SHAPERO We have gone with a mini theme around volcanoes, showing a unique Andy Warhol screen print of Vesuvius; a copy of the famous Sir William Hamilton’s “Campi Phlegraei,” which is considered one of the most beautifully illustrated books of the 18th century and the inspiration for tourists to start buying Neapolitan gouaches that became so popular in the 19th century; finally, a glorious, colored copy of Hamilton’s four-volume “Collection of Etruscan, Greek, and Roman Antiquities.”

GÜNTHER We are showing three outstanding books, each connected by their royal origins. These items give us an insight into the personal bookshelves of these European leaders, as well as the media used for self-promotion and information-sharing before widespread book-printing and modern mass media, like the internet. They are: a first-edition “Theuerdank” from 1517 made for the Holy Roman Emperor Maximilian I; Jean Bouchet’s “Life of St. Radegund,” an illuminated manuscript on vellum for King Charles VIII and his wife, Anne of Brittany, circa 1496-98; and a compendium on vellum for Spain’s King Juan II of Castile and León from 1425.

CLAVREUIL A first-edition, inscribed copy of “Les Fleurs du Mal” by the French poet Charles Baudelaire; a first-edition, woodcut book printed by Jesuits in Beijing for the Kangxi emperor of China of his astronomy observatory and scientific instruments; and a rare 1485 edition of “Herbarius” illustrating 150 plants and their medicinal uses.

TENSCHERT We thought it fitting to evoke the most important private manuscript collection of recent times — that of Baron Edmond de Rothschild (1845-1934) — with two fine medieval parchment manuscripts that he once owned. The first is a French Book of Hours (an illustrated prayer book) produced in 1425, then bound in around 1580, as a gift of Catherine de Medici for her relative, Marguerite of Lorraine, in golden-brown morocco leather with silver tooling. Our other manuscript is a Book of Hours made circa 1485 in Paris for a young woman, Françoise de Bellecombe, featuring more than 100 miniatures by one of the important royal illuminators. Her husband paid a sum that would be $4 million to $5 million today. What was your favorite find?

SHAPERO Not the most valuable of books, but one I liked very much, was a manuscript copy of the state of the French Navy prepared and given to Louis XVI and bound in green morocco with his coat of arms. He then gave it to Marie Antoinette. It was a personal gift from the king to his queen, a wonderful slice of history. I bought it in Paris when I was quite young in the trade, then sold it the same day and doubled my money immediately. I bought it back 30 years later and it’s now in my stock.

GÜNTHER Two items stand out to me. One, the Stammheim Missal (1170-1180), now resides in the collection of the J. Paul Getty Museum in Los Angeles. I acquired it from a German noble family who had owned it for around 200 years, and sold it in the mid-1990s to the Getty. I still think it’s the best manuscript in their collection. Another favorite is the 10th-century Etymologiae written by Isidore of Seville. In the 19th century, a collector split the book into two parts, the second of which was passed down to a European collector. This collector came to me in the hope that we might find the first part and reunite the two. The missing half was found, and after 200 years, it was rebound and complete again.

TENSCHERT Having privately bought an incredibly rich 14th-century Book of Hours, illuminated throughout and with 60 (!) full-page miniatures by the so-called Martainville Master, we found out that this must have been the personal prayer book of Queen Catherine of Aragon, Henry VIII’s first wife. The manuscript sold immediately. I can’t share the name of the buyer or the price, only that it is an American customer. Americans are waking up to this kind of collectible.

Advice for starting a rare-book collection?

SHAPERO The only advice to any collector, in every field, is buy what you like. This does not mean that you should not do your research or educate yourself in this field — in fact, this is essential — but that however the value moves, up or down, you will always have that love and appreciation of what you own.

TENSCHERT Buy only the most beautiful object you can afford, weed out anything run-of-the-mill or in poor condition. As a lover of books, I must tell you to please keep away from single miniatures, let alone cuttings which remind you only of their being the slaughterhouse waste of once-complete manuscripts.

CLAVREUIL Whatever the budget is, visit as many bookshops as you can and meet the experts in order to figure out the kind of collection you want to build. Trust and learn from booksellers.

GÜNTHER There is no set of rules for collecting, but be clear in your motivations. You can decide that you only want books from one period, or one geographical region, then you can refine your eye through specific study. It’s possible to build a collection at any budget (within reason) and it will be something special if it has been driven by your passion.