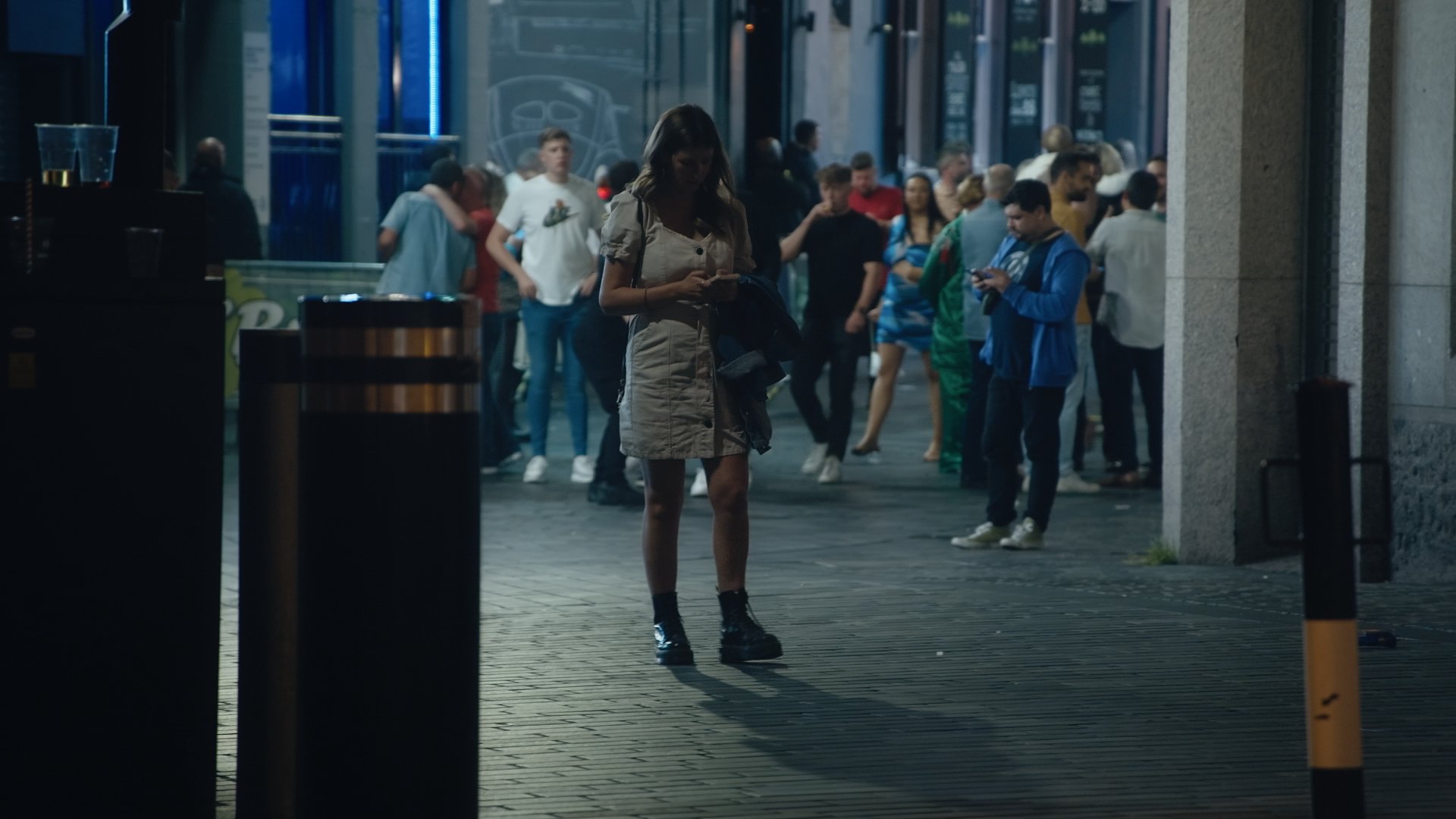 Last night I watched a documentary I wish never existed.

A powerful film by director Alice McShane and journalist Ellie Flynn, who goes undercover as a lone drunk woman in an experiment to see how men would respond to her.

The results were harrowing, but unsurprising.

She was harassed, assaulted, and followed.

I wish the documentary didn’t exist because I wish that there was no need for it to be made.

If only women were able to exist in a vulnerable state, without being at risk of sexual violence.

The sad reality is, with 71% of women in the UK having experienced some form of sexual harassment in a public space, the makers of Undercover: Sexual Harassment – The Truth have provided one of the most important resources needed to tackle the issue.

Following the rape and murder of Sarah Everard and the discourse that ensued, in the documentary, reporter Ellie Flynn embarks on a series of experiments in order to show first-hand how women are treated by men both on dating apps, and in real life.

In one experiment, Ellie sets up a fake profile under the name ‘Lucy’ – using photos of her 18-year-old self – on the UK’s top three dating apps. She’s immediately contacted by men more than twice Lucy’s age, bombarded with sexually explicit messages and unsolicited nude photos every day for two weeks.

When she calls the men who sent her dick pics, asking them why they did it, some are taken aback and apologise. Others try to justify their actions by claiming it was what they thought Lucy wanted. One says they send explicit pictures ‘to everybody’, and another tries to suggest that Lucy was ‘asking for it’.

It’s an all-too common occurrence; men presuming that their behaviour is wanted or encouraged, and not thinking about the impact it could have on the person at the other end.

I’ve been sent unsolicited dick pics both by strangers and people I’ve been on dates with that I barely know.

When challenged and told that I very much did not want to receive photos of his penis, the man suggested it was a ‘me problem’. That I should want to be sent such images. That I was some sort of freak for finding it offensive.

Finding myself manipulated, I ended up apologising to him, not the other way around.

Even when women stand up for ourselves and express a desire for boundaries, men can bully us into thinking that we are being prudish for doing so.

I wish I’d been able to show him this film.

One of the most disturbing parts of the documentary is when Ellie poses as a lone drunk woman looking for her friends. Almost immediately, she’s approached by a man who expresses an interest in her and follows her back to her hotel room.

Thankfully, she’s being monitored by her production team and a security guard is concealed in her bathroom.

As soon as the man gets to her room, she comes out of character and confronts him, asking him why he followed a vulnerable drunk woman who had expressed no desire to be in his company and was unable to consent.

He said: ‘I like you,’ and ‘We came together’. When Ellie shakes her head and says: ‘No, I told you I was fine on my own,’ he appears to be taken aback when she asks him to leave. Then he shockingly asks to kiss her, before leaving.

We can only imagine what might have happened if Ellie really was as incapacitated as she was pretending to be.

Women know all too well that men may try to take advantage of us when we are vulnerable, but what the film went on to depict was the premeditated nature of some of the harassment Ellie was subjected to.

One man appeared to follow Ellie with an accomplice – when she realises this, she contacts her crew in fear, ending the operation.

Another man had been following her around Leicester Square in several different locations. He waited for the right moment and approached her, forcefully grabbing her hand and rubbing it against his crotch, saying: ‘I’m a good boy.’ It’s vile.

Despite my own experiences on the subject of sexual harassment, I hadn’t given enough thought to the men who go out with the sole purpose of offending against women.

The times I have been sexually assaulted, I figured they were crimes of opportunity, rather than pre-meditation.

Ellie wouldn’t have known that she was being followed for so long, or by two men, if she didn’t have camera footage to look back on.

As someone who has had similar things happen to them in public, the trauma doesn’t end when the harassment stops, either. You play it over and over in your head, trying to make sense of it, wondering if there was anything you could’ve done differently, blaming yourself for someone else’s actions. But there is also a secondary trauma that can be experienced when disclosing such events to other people.

I’ve been gaslit into thinking that what happened to me wasn’t such a big deal, that I’d simply imagined being followed home. While people undoubtedly did this to try and minimise my anxiety, it served as additional trauma by making me question one of the most powerful weapons at my disposal: my instincts.

This documentary has proved that we need to work towards a culture shift in which men are made aware of the impact that sexual harassment has on women – that women need to be taken seriously, and believed when they report it.

It’s vital that men see the reality of what it’s like to exist as a woman, not only so they see how terrifying it can be, but so that they can call out such behaviour in public, their friendship groups and perhaps within themselves.

Only then can we truly address the culture of sexual violence towards women and girls.

A woman shouldn’t have to put herself in danger for the purpose of a TV show to prove that it exists – and that it’s rife.