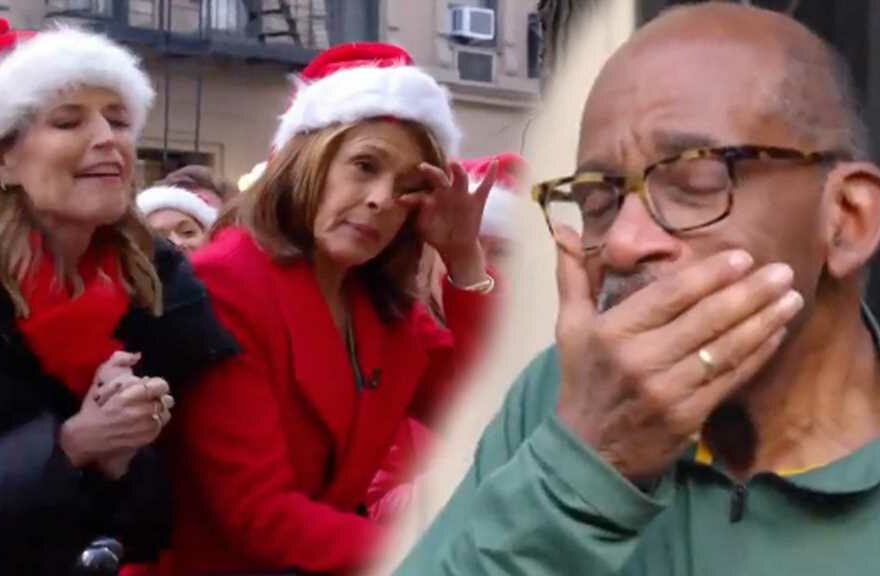 "I love you all more than you could ever know."

TODAY brought the studio to Al Roker this week, giving him one amazing holiday surprise as he continues to recover from blood clots in his leg and lungs.

On Wednesday’s episode of the morning show, Savannah Guthrie, Hoda Kotb, Craig Melvin, Jenna Bush Hager, Sheinelle Jones and fill-in meteorologist Dylan Dreyer were joined by a massive group of the show’s staff as they paid a surprise visit to Roker’s home.

The show organized the drop-by with Roker’s wife Deborah, with Al stepping out to the giant crowd singing “Jingle Bells” in unison to him after deciding to take “the holiday spirit to him” during his recovery. His eyes started to well up almost immediately, choking back tears as the performance went on.

Hoda was also seen getting emotional as she and the rest of the TODAY crew sang to him. “I love you, Al,” she told him after they finished the first song — before he cracked, “I’m surprised you did that without a prompter.”

“I just want to thank you all. It’s been a long hard slog and I’ve missed you all so very much,” he then told the group. “All these faces, it just means the world to me and to our family, my Deborah — who has just been our rock — I thank you so much.”

Kotb told her colleague that “every single person couldn’t wait to come out here and sing to you,” before they then performed a rendition of “I’ll Be Home for Christmas.”

Before they parted ways, he told them, “I love you all more than you could ever know.”

Back in the studio, Hoda revealed how moved she was by Roker’s reaction.

“We’ve all known Al over the years … and I don’t think we’ve ever seen him like that,” she said. “I think he realized — he knows he’s loved — but sometimes you have to know just how much on a certain day.”

“Words cannot express how much I love my @todayshow family for coming over to do a little caroling including a special rendition of ‘I’ll Be Home For Christmas,'” Roker shared to Instagram after the performance aired.

Roker was hospitalized for blood clots in his leg and lungs, before he was released and eventually returned to the facility. His return date is still up in the air, but Melvin promised, “He’ll be back on the air soon.”