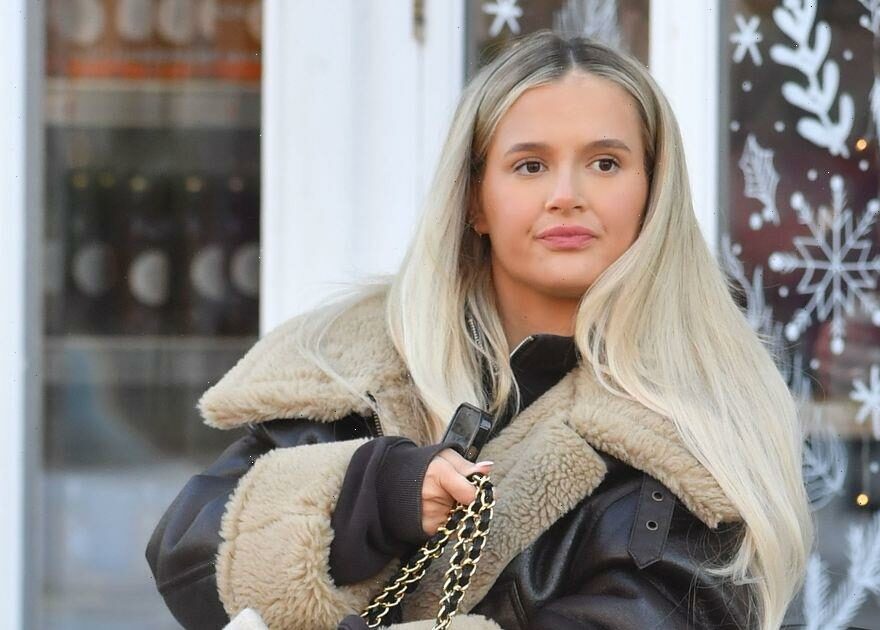 Mum-to-be Molly-Mae Hague was spotted out and about braving the cold on Wednesday as she had a coffee date with a friend.

The pregnant Love Island star, who is counting down until her due date, was spotted sitting outside as she enjoyed a hot coffee with a pal in Cheshire.

Molly-Mae was cosily wrapped up in dark brown joggers and a black leather jacket with white teddy details, which she was previously seen wearing as she had an adorable breakfast date with her boyfriend Tommy Fury.

She completed the outfit with a cream coloured scarf and UGG boots, as well as carrying a black Chanel handbag, which Tommy gifted to her at their baby shower.

Molly-Mae's pal was in a similar ensemble, wearing a white teddy coat over a blue hoodie with a white beanie.

The blonde beauty was seen smiling big with her friend as they walked back to their cars.

The influencer was apparently very lucky as she'd parked her new £160,000 Mercedes G Wagon on double yellow lines, but had managed to avoid getting a ticket.

Molly-Mae is nearing the end of her pregnancy and her due date is thought to be either late 2022 or January.

Her boyfriend Tommy recently whisked her away for their last weekend trip as a family-of-two before "life changes forever" with the birth of their daughter.

The couple, both 23, met on Love Island in 2019 and have been keeping fans closely updated on their life ever since.

This isn’t the first trip the couple has taken ahead of the birth, having previously gone to Dubai last month for a “babymoon” for their last holiday abroad before their baby arrives.

During their time there, they stayed at a £1,000 a night resort, where Molly-Mae posed for a selfie inside the stunning marble-clad bathroom in their luxurious room as they celebrated her seventh month of pregnancy.

This was the second time the couple stayed at the resort, as they went to the same hotel while on holiday last year.

Last month, Molly-Mae’s sister Zoe, 26, revealed she had warned her little sister about getting pregnant young.

"I always used to say to her when growing up, because I’m very protective of her, ‘Don’t be too young [when you have kids]’ and she was like, ‘Listen, everyone’s on their own journey’.

She also told OK! that Molly-Mae is thriving in her pregnancy and that she will be a great mum to her daughter.

“She’s thriving during pregnancy, like, she’s been so lucky (touch wood) from start to finish she’s not been ill. She’s doing really well,” Zoe said.

Zoe also said that Tommy and Molly-Mae will be “unreal” parents, as “from day one they’ve both been so excited about being parents.”