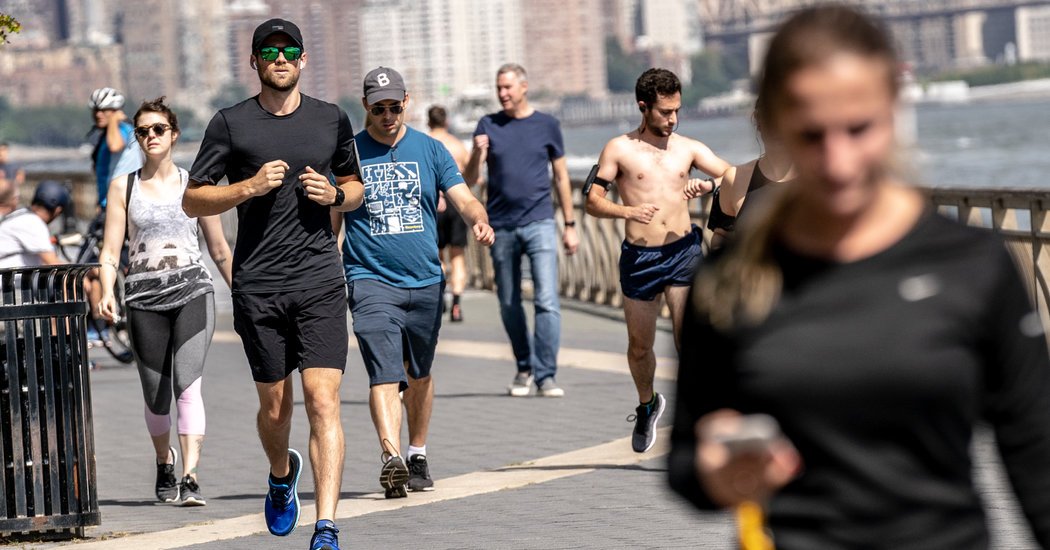 People hoping to lose weight with exercise often wind up being their own worst enemies, according to the latest, large-scale study of workouts, weight loss and their frustrating interaction. The study, which carefully tracked how much people ate and moved after starting to exercise, found that many of them failed to lose or even gained weight while exercising, because they also reflexively changed their lives in other, subtle ways. But a few people in the study did drop pounds, and their success could have lessons for the rest of us.

In a just and cogent universe, of course, exercise would make us thin. Physical activity consumes calories, and if we burn calories without replacing them or reducing our overall energy expenditure, we enter negative energy balance. In that condition, we utilize our internal energy stores, which most of us would call our flab, and shed weight.

But human metabolisms are not always just and cogent, and multiple past studies have shown that most men and women who begin new exercise routines drop only about 30 percent or 40 percent as much weight as would be expected, given how many additional calories they are expending with exercise.

Why exercise underwhelms for weight reduction remains an open question, though. Scientists studying the issue agree that most of us compensate for the calories lost to exercise by eating more, moving less, or both. Our resting metabolic rates may also decline if we start to lose pounds. All of this shifts us back toward positive energy balance, otherwise known as weight gain.

It has not been clear, however, whether we tend primarily to overeat or under-move as compensation, and the issue matters. To avoid compensating, we need to know how we are doing it.

So, for the new study, which was published last month in the American Journal of Clinical Nutrition, researchers with the Pennington Biomedical Research Center in Baton Rouge, La., and other institutions decided to exhort a large group of inactive people into exercising and closely track how their waistlines and daily habits changed.

Both routines lasted for six months. Throughout, the volunteers wore activity monitors, and the researchers periodically checked their metabolic rates, energy intake and fitness. The volunteers could eat as they chose.

Afterward, everyone returned to the lab for comprehensive remeasurements. As expected, the control group’s numbers, including their weights and resting metabolic rates, had not budged. But neither had those of most of the exercisers. A few had dropped pounds, but about two-thirds of those in the shorter-workout group and 90 percent of those in the longer-workout group had lost less weight than would have been expected.

They had compensated for their extra calorie burn.

But not by moving less, the scientists found. Almost everyone’s activity-monitor readouts had remained steady. Instead, the exercisers were eating more, other measurements and calculations showed. The extra calories were slight — about 90 additional calories each day for the some-exercise group, and 125 a day for the most-exercise set. But this noshing was sufficient to undercut weight loss.

Interestingly, the researchers also found that those exercisers who had compensated the most and lost the least weight tended to be those who had reported at the start that they thought some good health habits gave people license for other, insalubrious ones.

“In effect, they felt that it’s O.K. to trade behaviors,” says Timothy Church, an adjunct professor at Pennington who led the new study. “It’s the ‘if I jog now, I deserve that doughnut’ idea.”

In consequence, they lost little if any weight with exercise.

But the study produced other, more encouraging data, he says. For one thing, almost everyone’s resting metabolic rates remained unchanged; slowed metabolisms would encourage pounds to creep back. And those few exercisers who avoided an extra cookie or handful of crackers did lose weight.

“There was only a small difference, over all,” between those who compensated and those who did not, Dr. Church says. “We’re talking about barely 100 calories. That’s about four bites of most food.”

So, people hoping to lose weight with exercise should pay close attention to what they eat, he says, and skip those last four bites, no matter how tempting.

Who are the relationship experts on Unbreakable? | The Sun
Entertainment