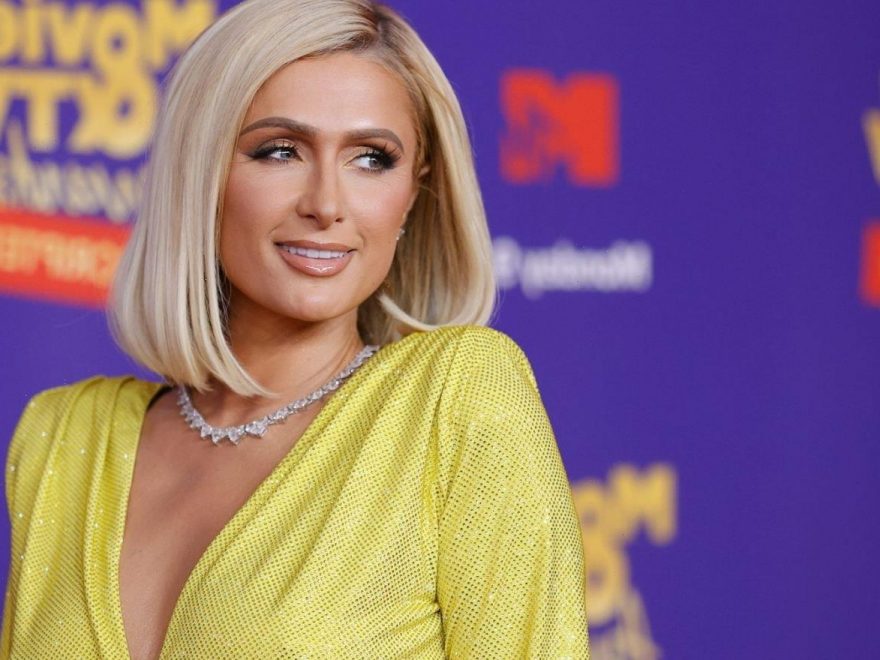 Paris Hilton is the latest in a long line of women to be dogged by unfounded pregnancy rumours, and we’ve honestly had enough.

You’d be forgiven for thinking the opposite, of course, as countless publications ran headlines yesterday insisting that The Simple Life star is “expecting her first baby at 40.”

These same tabloids found photos of Hilton in floaty empire-line dresses to illustrate their stories, too – because, hey, why concoct a lie if you can’t add a side of body shaming, too? They dug through the archives to find supporting quotes from the woman herself, too, all about the fact that she has been undergoing IVF treatments.

And, in doing so, they basically forced Hilton to come out and shut all of these baseless rumours the hell down.

Paris Hilton has told the world that she isn’t pregnant – so why are certain publications still insisting she is?

“I woke up to about 3,000 texts,” Hilton said during a special edition of her This Is Paris podcast. “All my iPhones are blowing up – all five of them – with everyone wishing me congratulations and so happy for me.

After joking she was expecting triplets, Hilton added: “Actually, I’m just kidding. I am not pregnant.”

Yes, Hilton made a joke out of it all. Yes, she laughed it off. Yes, she behaved exactly as one might expect someone who’s grown up in the media spotlight to behave in such a situation.

Please, though, think about the situation properly for a second; a woman who’s spoken about the realities of going through IVF, who’s told the world that she would really love to have a baby someday, woke up to a barrage of texts congratulating her on falling pregnant… even though she isn’t. That can’t have been easy, can it?

“I am not pregnant,” says Paris Hilton.

Despite this, plenty of gossip sites are still leaning into the narrative that they’ve concocted. They’ve branded Hilton’s statement a “denial” – as if there’s a chance the court of opinion might still find her guilty – and repeated their claims that an “unnamed source” is insisting that Hilton is pregnant with her first child.

“Hilton’s rep [has] declined to comment,” added Page Six gleefully, as if the blunt shutdown issued by Hilton herself via her podcast stands for absolutely nothing.

Look, I get it; a baby is joyous news – and, if there’s anything this world needs right now, it’s some bloody joyous news. But I’ve said it before, and I’ll say it again; a woman is only pregnant if she says she is.

That means, then, that there’s no such thing as an “alleged” pregnancy. That a so-called “source” should not be given a platform to speak about another person’s reproductive status. And that the tabloids’ fondness for zoomed-in paparazzi photos of women’s stomachs – solely to invite speculation on whether or not she might be pregnant – is, to quote Jennifer Aniston, utterly dehumanising.

Jennifer Aniston is sick and tired of the media’s endless pregnancy speculation.

“The objectification and scrutiny we put women through is absurd and disturbing,” the Friends actor famously stated in her now-iconic ‘For The Record’ essay.

“Yes, I may become a mother someday, and since I’m laying it all out there, if I ever do, I will be the first to let you know. But […] I resent being made to feel ‘less than’ because my body is changing and/or I had a burger for lunch and was photographed from a weird angle and therefore deemed one of two things: ‘pregnant’ or ‘fat.’ Not to mention the painful awkwardness that comes with being congratulated by friends, coworkers and strangers alike on one’s fictional pregnancy (often a dozen times in a single day).”

Amen, Jen – women are more than walking, talking wombs. Our worth should not be determined by our ability to bring forth children (seriously, this isn’t The Handmaid’s Tale). And we absolutely shouldn’t be subjected to this outrageous pressure to procreate, because there are so, so, so many reasons why a woman may not have children.

Trying to get pregnant can be a stressful life event alone; without factoring in the anxiety of everyone else watching your body for subtle changes.

On the flipside, of course, there are just as many reasons as to why someone may be reluctant to confirm their pregnancy, particularly if they’re a woman in the spotlight. Which is why we should never (I honestly can’t believe I’m having to write this in 2021, but here we go) publish an article claiming that they are expecting a baby without receiving confirmation from them first.

We shouldn’t rush to congratulate them, either, unless we’re 100% certain that it’s a) true and b) genuinely happy news (not every positive pregnancy test is a dream come true, OK?). And we should never assume anything because, let’s face it, to do so really does make an ass out of u and me – or, at the very least, an ass out of the progress made by the women’s rights movement.

I know I’m repeating myself here, and I’m sorry for it, but I wholeheartedly insist on banging this drum until the end of time if I have to.

With this caveat in place, then, some advice for you all: until you can see the baby actually making its way out of the womb, please never assume that a woman is pregnant. Ever. It is absolutely none of your business, unless she decides to make it your business. So wait for her to confirm her news, in her own time, and in her own way.

And, if she tells you that she isn’t pregnant, take it as fact and move the hell on already.