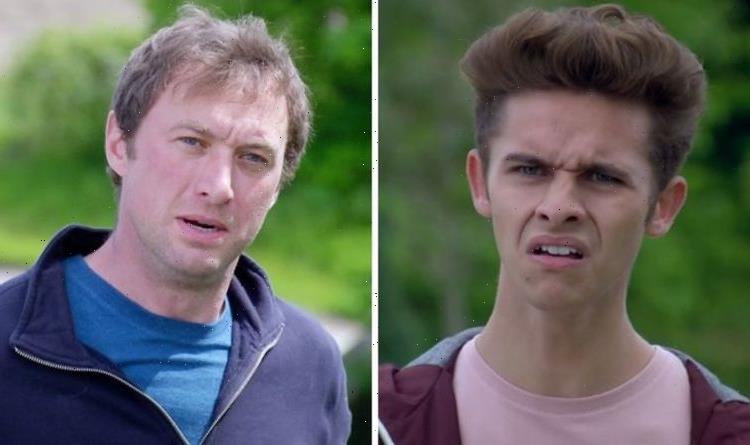 Jacob (played by Joe-Warren Plant) has been clashing with Liam (Jonny McPherson) over the teenager’s funeral arrangements, with her boyfriend believing the service should reflect her youthful personality, but Liam is adamant that the funeral should be traditional and dignified. Wednesday’s Emmerdale episode left viewers stunned as Liam reached the end of his tether and banned Jacob from attending, but will the ITV soap see Leanna’s (Mimi Slinger) boyfriend and friends storming the funeral in defiance?

Evil Meena Jutla (Paige Sandhu) murdered Leanna after the latter confronted her about items of Meena’s she’d found which suggested she had killed her friend.

Following a frightening chase through the village, Meena threw Leanna off the bridge and left her to die.

The police ruled the death as a tragic accident, and Liam has been beside himself with grief.

In his bereaved state, he has been pushing wife Leyla (Roxy Shahidi) away and refusing to listen to any of Jacob’s ideas.

But things came to blows in Wednesday’s instalment, which saw Liam cancel all of Jacob’s funeral plans.

Later, Jacob tried to apologise to Liam and bring him round to his way of thinking, but Liam wouldn’t hear it.

“Liam, I’m sorry about crashing your meeting before, but we want the same things, we’re on the same side,” the teenager said.

He added: “Leanna was amazing, she made you notice when she walked into a room.

“She had style without even trying – she was the coolest girl I know, her funeral should show that.”

He continued: “If she’s up there watching it then I want her to know that we loved her.”

“This is intolerable,” Liam replied, getting angrier.

“She was obsessed with those neon signs,” Jacob pointed out. “She sent me links all the time and blue took her back to her happy place – the sea and the sky, that’s why it was her favourite colour.

“And she loved collecting photos of her mates, have you seen her Instagram page?”

A stubborn Liam turned to Leyla, remarking: “I can’t.”

Jacob reasoned: “We don’t have to use every one of my ideas, I’m not saying we go back to how it was completely, but we can compromise.”

“Will you take your son home!” Liam yelled at Leyla. But a headstrong Jacob pushed on, adding: “She was only 18, why would she want an old lady funeral?”

He continued: “You’re disappointing so many people, not just me, every single one of her mates too.

“Liam, if you do it your way you’re going to look back and regret it.”

But this was too much for Liam to listen to, and he ended up banning Jacob from attending the service, along with Leanna’s friends. “It will be a private event, family only,” he concluded.

Jacob was stunned as he watched Liam walk away, pleading with him not to do it.

But will Jacob and the other youngsters take no for an answer?

Jacob seems determined to be at Leanna’s send-off, could he arrange a group of teens to crash the service?

It’s likely he won’t want to ruin the funeral and interrupt proceedings, but it’s very clear he won’t listen to Liam.

It’s possible he and Liv Flaherty (Isobel Steele), who has been helping him recently, might take a stand and organise a group of Leanna’s friends to turn up.

Viewers seem to think this could happen, with one commenting on Twitter: “All her friends will storm the church and riot #Emmerdale.”

Another commented: “Despite the disagreements Jacob knew Leanna too therefore he should be at her funeral. At the same time Jacob should accept that Liam wants the funeral to go his way. #Emmerdale.”

Someone else echoed this, adding: “Jacob could hold a separate memorial in Leanna’s favour with all the mod cons that she was in too. Meanwhile Liam can look at the boring non-applicable funeral and be disgusted how none of it is a reflection on Leanna’s life.”

Emmerdale continues on Thursday at 8pm on ITV.