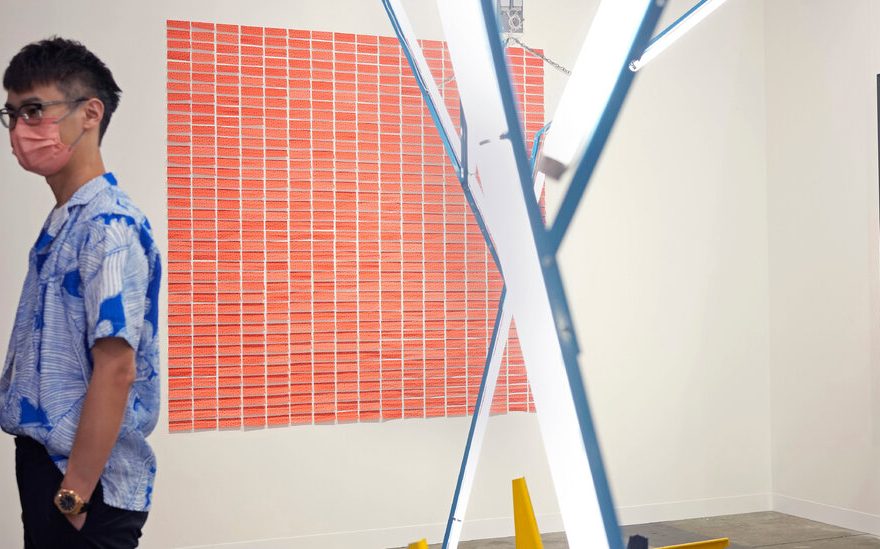 Deciding whether to participate in Art Basel Hong Kong this year was keeping Wendy Olsoff up at night.

The art fair, taking place until Sunday at the Hong Kong Convention and Exhibition Center, has new, pandemic-adjusted features that include booths staffed by local representatives who are not gallery employees, so-called satellite booths. It is a solution to the problem posed by travel restrictions, especially the city’s strict quarantine rules.

Ms. Olsoff — a co-founder of the New York gallery PPOW, which recently moved to TriBeCa — recalled wrestling with the compromise.

“I went back and forth on it,” she said. “At first I said: ‘No, we can’t do this, I have to be there personally. How can this possibly be good?’”

But she slept on it. Or tried to.

“I woke up and said, ‘I want to support the Hong Kong fair; we should do it,’” Ms. Olsoff said.

PPOW is showing the work of the painter Elizabeth Glaessner, including “Tongue Tied” (2021), with work in the booth handled by people arranged through the fair, along with some independent help organized by the gallery. 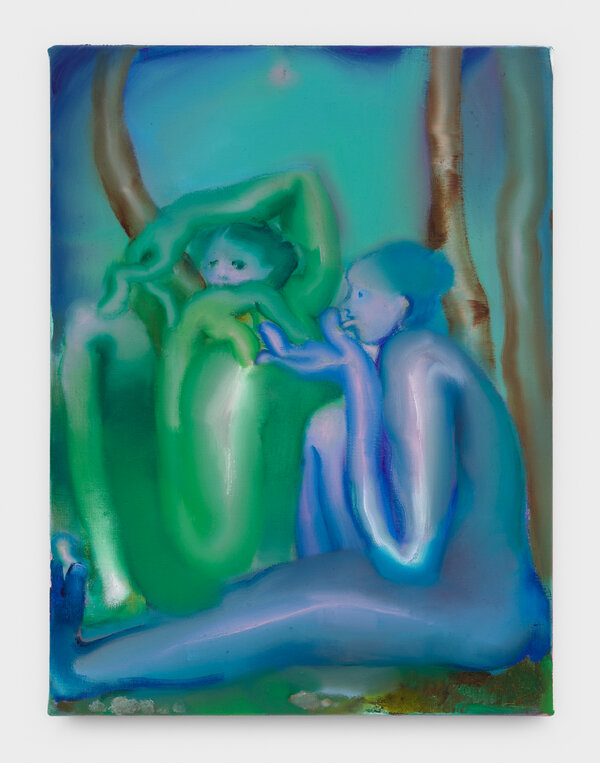 “This artist has a lot of interest in Asia,” Ms. Olsoff said, explaining her decision. “We want collectors to see work in person,” not a photograph online or a social media post.

Of the more than 100 galleries on hand from 23 countries and territories, about half are operating satellite booths. (Tickets are currently sold out.)

Most of those galleries are making presentations in the online viewing room concurrent with the physical fair, but there are no dealers showing only virtually.

This stands in contrast to the art fair Frieze New York, which took place this month; more than half its dealers offered online-only presentations.

Art Basel is making a bet on the long-term viability of in-person events.

“The vibrancy of the physical fair will return — we’re convinced of that,” said Marc Spiegler, global director of Art Basel, which also has editions in Basel, Switzerland, and Miami Beach.

“The fact that more than 50 have done satellites reflects the appetite for innovation and the trust they have in us,” Mr. Spiegler said of the galleries.

The fair’s coronavirus precautions include a mask requirement, temperature checks, timed entry and a revised floor plan with wide aisles for social distancing.

To run the fair, two members of Art Basel’s staff, including the director of Asia for the organization, Adeline Ooi, quarantined for three weeks in a hotel, which they could not leave.

Ms. Ooi, who is usually based in Hong Kong but had been living with family in Malaysia during the pandemic, said it was a challenging stint but added, “I believe in rites of passage.”

The satellite booths, she said, were a “flexible and pragmatic solution.” She added that finding the right local person for each gallery was a “matchmaking process,” with many of the assistants coming from the culture and tourism sectors.

“They’re not there as art advisers, but just to present the material,” Ms. Ooi said.

She cited the robust presence of Japanese galleries as one highlight of the art in this year’s fair.

“They are in full force again with great content,” Ms. Ooi said, citing the Kyoto gallery Shinbunkaku, which is showing the work of Morita Shiryu (1912-98), known for giving calligraphy a contemporary approach.

Take Ninagawa of Tokyo is presenting a solo show of the artist Danh Vo. The installation is an update of the one Mr. Vo did at the Venice Biennale in 2019 and it includes photographs, paintings, drawings and a sculpture.

“It’s an experiment for everyone,” Atsuko Ninagawa, who owns the gallery, said of her satellite booth. “The reason I want to participate is more than just getting to the collectors. The Japanese art scene has become very isolated since the pandemic, and it has just reinforced the importance of the fair for the discourse in Asia.”

She added, “It really has meaning as a place for people to come together.”

Some of the world’s biggest global galleries that show at the fair already have branches in Hong Kong, including Lehmann Maupin and David Zwirner.

“It’s always hard to make predictions, but what we do have is the recent experience of participating in both the Hong Kong Spotlight and West Bund fairs in November 2020,” David Maupin, Lehmann Maupin’s co-founder, wrote in an email. Art Basel created Spotlight for 22 local galleries as a response to the challenges of the pandemic.

Mr. Maupin, who also has a gallery branch in Seoul, added, “The proof was in the pudding, so to speak. Demand was huge — probably due to the forced hibernation that Covid brought with it.”

Leo Xu, the senior director of David Zwirner Hong Kong, said in an email that the gallery had a similar experience in November at ART021 in Shanghai, to which he traveled and then endured a two-week quarantine.

“In the end, it was worth it, because the sales results were really beyond our expectations,” Mr. Xu said. “At the end of the first day, we had sold nearly $6 million worth of art by 20 of the gallery artists — a nearly sold-out booth.”

His booth is featuring works by the New York-based Belgian painter Harold Ancart, including “Untitled” (2020), in oil stick and graphite on canvas.

“There’s a connection in how the artists work, but the practices are very different,” said the gallery’s managing director, Kelvin Yang, who emphasized the ways the artists use their bodies.

The Hong Kong-based artist Wesley Tongson, represented by “Mountains of Heaven No. 149” (1999), for instance, “used his fingers and fingernails to paint a Chinese landscape.”

Mr. Yang said Galerie du Monde was founded with a focus on Chinese artists but has since branched out to include more international talent.

For this fair, “The audience and the visitors will be local,” Mr. Yang said, adding that he did not mind that aspect.

Business has been slower during the pandemic, he added, a combination of official reduced capacities for businesses and cautiousness among art lovers.

“The exhibition traffic is not what it used to be,” he said.

And that only highlights the importance of having a robust online component of the Hong Kong fair.

David Kordansky Gallery of Los Angeles is showing works by the sculptor Huma Bhabha at the physical fair as well as online. Ms. Bhabha is known for her striking, and at times grotesque, figural works.

The sculpture “Fury” (2021), made partly of cork, is being presented both ways. But several of Ms. Bhabha’s untitled works on paper can be seen only digitally.

Counting the Hong Kong edition, Art Basel has offered seven online viewing rooms since lockdowns began, and even if the world went back to prepandemic reality tomorrow, they would not be going away.

“The digital overlay is something we plan to extend permanently,” Mr. Spiegler said.

He added: “We developed a whole toolbox of techniques and tactics for people to access a gallery’s program digitally. The pandemic has equipped us to do a better job serving the collectors who can’t attend.”