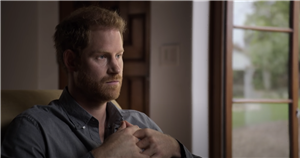 It’s been one of the most highly anticipated series this year – and anticipation for Prince Harry and Oprah Winfrey’s new documentary skyrocketed when the trailer for it landed on Monday.

Well, the wait is finally over and all five episodes are available to watch on Apple TV+ as of Friday, 21 May, 2021. But what is The Me You Can’t See actually about?

Throughout the series, the Duke of Sussex and US chat show legend Oprah Winfrey aim to spark honest and open conversations about mental health. This is something Prince Harry – as well as his wife Meghan Markle – have consistently tried to shine a light on.

What is The Me You Can’t See about?

Featuring a diverse range of guests, as well as Harry and Oprah's own accounts of their personal mental health battles, the must-see show promises to be insightful and varied.

The roster of guests includes high-profile stars such as singer Lady Gaga, NBA player DeMar DeRozan and actress Glenn Close, as well as everyday people – including a Syrian refugee and company CEO.

In the trailer, Oprah said: “All over the world people are in some kind mental, psychological, emotional pain.”

“With that stigma of being labelled the other the telling of the story, being able to say this is what happened to me is crucial.”

Harry added: “To make that decision to receive help is not a sign of weakness. In today’s world more than ever it’s a sign of strength.”

The trailer also included heartbreaking footage of the young Prince standing next to his father, Prince Charles at Princess Diana’s funeral.

In addition to this, Lady Gaga – who opens up in the documentary about her own horrific ordeal after being raped by a music producer aged 19 – is shown to be tearing up as they tell their story.

By addressing their own mental health struggles in open and honest conversations with one another, Prince Harry, Oprah and their guests hope to “destigmatize the highly misunderstood subject and give hope to viewers who learn that they are not alone.”

How to watch The Me You Can't See on Apple TV+?

You can watch the new documentary series, produced by Prince Harry and Oprah Winfrey, by signing up to Apple TV+ streaming service here. The new show, which will air on May 21, explores mental health and emotional well-being and includes featured interviews from Lady Gaga, Glenn Close, NBA star DeMar DeRozan and others about their experiences.

You can subscribe to Apple TV+ instantly for £4.99 a month or try the free 7-day trial, but remember to cancel before the trial ends to avoid getting charged the full subscription fee. Apple is also giving away Apple TV+ subscriptions for free for one year when you purchase a new iPhone, iPad, iPod touch, Apple TV or Mac. Find out more about the offer by visiting tv.apple.com.

This article contains affiliate links, we may receive a commission on any sales we generate from it.Learn more

How to watch The Me You Can’t See

The Me You Can't See can be watched on Apple TV+, an online streaming platform.

Apple TV+ is available via the Apple TV app on iPhone, iPad, Apple TV, iPod touch, Mac computers, select Samsung and LG smart TVs, Amazon Fire TV and Roku devices, as well as at tv.apple.com, for £4.99 per month with a seven-day free trial.

Apple TV+ gives you seven days of free viewing before charging £4.99 a month.