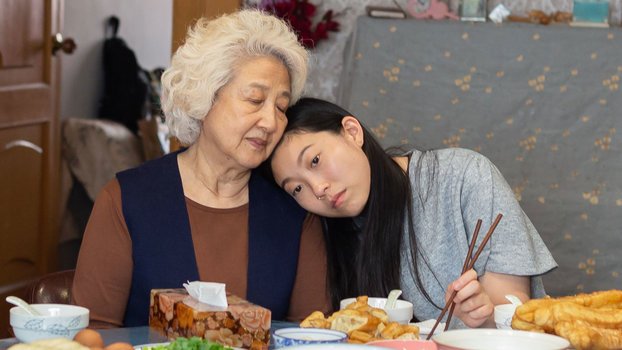 The words “Based on an Actual Lie” introduce writer and director Lulu Wang’s film based on her own family story, The Farewell. Starring Awkwafina in her first leading dramatic role, as the film's protagonist, Billi, the performance and its quiet authenticity is nothing short of astonishing. The film opens with Billi walking the busy streets of New York. Though she speaks Mandarin on the phone to her Nai Nai (which means grandmother) in China, Billi’s youthful Americanness is on full display through her accent, gait, and attitude. The two women tell each other white lies, one after another. Nai Nai lies about being at a hospital, not wanting her granddaughter to worry. Billi lies about wearing a hat to keep warm, to stave off her grandmother's concerns. Though the film has barely begun, the familiarity burns my eyes. Suddenly, I crave the protective embrace of my grandparents, all of whom are gone.

The plot unfolds as Billi learns Nai Nai has been diagnosed with terminal cancer but the extended family decides to keep the diagnosis a secret from her. They falsifying x-rays and test results to convince her the results were nothing more than “benign shadows,” unworthy of concern. Instead of telling her the truth, the family orchestrates a faux wedding for Billi’s cousin, Hao Hao, and his dumbfounded Japanese girlfriend of only a few months, as an excuse to host a family gathering one last time in honor of Nai Nai.

I am a civically-active, proud U.S. citizen with a perfectly American accent, though I was born in China. Even so, I've always felt perplexed about my inability to take offense at the question, "Where are you really from?" The Farewell is the first time I’ve seen my own narrative represented on screen. It captures the nuance of a character who is firmly American and who also experienced the trauma of immigration as a child, forced to leave pieces of herself behind in the hearts of her grandparents and the landmarks of her childhood.

This underlying deeper subcultural complexity, perhaps not obvious to others, was central to the film’s authenticity, and core to why it has been resoundingly loved by Asian-American viewers. For a deeper understanding of the work, here are some of the cultural Easter eggs in The Farewell, explained.

In the opening sequence, the Chinese title is overlaid with the English one. “别告诉她” directly translates to “Don’t tell her,” which is perhaps more mysterious and less solemn than the English title. In an interview with NPR, Wang disclosed that her real Nai Nai still does not know about her cancer diagnosis. The secret is still alive and the lie has grown with a full-fledged hit Hollywood movie based on it. Wang and the family continue to keep the central plot of the film and the name of the film from their matriarch.

2. Billi Was a “Satellite Baby”

Many Chinese immigrant families in the U.S. can’t afford childcare and often rely on grandparents or other relatives in China to raise their young children. Though U.S.-specific numbers are unavailable, an estimated 60 million Chinese children are cared for by long-distance family members, primarily grandparents. Billi lived with her grandparents for several years while her parents were working in the U.S. before they could bring her over, which explains her closeness to her Nai Nai. Satellite children sometimes show subtle signs of trauma while facing the challenge of integrating to life in the U.S. later on. In a confrontation with her mother, Billi expresses the trauma and confusion she felt being suddenly ripped away from her happy childhood in China.

When Billi arrives at Nai Nai’s apartment unannounced, she is greeted enthusiastically with pats on the bottom from her grandmother, who gleefully remarks that it’s just as she remembers it. My mother still pats my butt when we hug. To my mortification, she did this to my close male and female friends alike in high school and college, and now, she does it to my husband.

Nai Nai calls Billi “stupid child” throughout the film, a Mandarin Chinese term of endearment. Billi relishes being called this, which reminds her of the childhood years she lived with Nai Nai, of being babied. In this loving context, the translation is closer to the American childish nickname “Silly Goose.”

When tensions come to boil at a family dinner, Billi’s parents become ensnared in an argument with the extended family. The local relatives feel aggrieved by the brothers who left China. Wang deftly illustrates the complicated relationship Chinese people have with the West, part resentment and part admiration. Wang told Slate, “There’s this sort of feeling that the people who left, they don’t really understand China.” The reverse is also true, where people in China do not really understand Chinese Americans, who can be viewed as opportunist, even traitorous. When an aunt proclaims that Chinese people should stay in China instead of turning American, Billi’s mother challenges her, “Will you send your son to study in the U.S. when he’s older?” The answer, clearly affirmative, leaves the aunt speechless.

6. An iPhone for the Ghost of Grandpa

Chinese funeral rites are nothing if not elaborate, and ancestor worship is common practice. For my grandfather’s funeral, my family procured a colorful, fancy mini-mansion made of cardboard, at least double the size of a refrigerator box, along with other luxuries made of papier-mâché, including servants, a limousine, and even a pet pigeon. All of these were burned in a massive bonfire so that they may reach him in the afterlife. Like Billi’s family, we also burned stacks and stacks of spirit money, which is symbolic antique money for our ancestor’s use in the spirit world. Funerals often last for days. Offerings of the best foods and drinks are put forth before family shrines. The cemetery scene was filmed at the actual gravesite of Wang’s grandfather, adding another touch of authenticity. It is customary, especially preceding big events like a wedding in The Farewell, for the family to visit ancestors’ graves to make offerings, keeping ancestral spirits content enough to continue to bless the family. The burning of an iPhone box along with another deposit of spirit money may seem comical to outsiders, but it’s common practice for families who want to provide their ancestors a prosperous afterlife, sparing them no symbolic luxuries.

Billi’s chubby little cousin who was glued to video games at all times is a poignantly authentic portrayal of a boy who suffers from Little Emperor Syndrome. He is an example of the consequence of China’s one-child policy, which existed from 1979-2015. This policy, fueled by the cultural preference for a male heir to carry on the family name, resulted in many urban families raising over-indulged boys. The cousin’s style — dressed better than most of the adults at the wedding; the high-touch haircut, dyed and permed at a young age — also signal him to be quintessentially “Little Emperor."

In a scene of dramatic irony and comedy, Nai Nai directs the awkward couple during their very stiff pre-wedding photo shoot. Another bride and groom, in full wedding finery, barge into the set and apologize profusely when they realize they have the wrong location. Elaborate sets in large photo studios are not unusual in the Chinese wedding photography industry, estimated to be worth billions, where the high-end glamour, makeovers, clothes rentals, pre-wedding photo shoots, and retouching can cost many thousands of dollars. The photos are then displayed prominently at the wedding itself.

9. Is There an Elephant in the Banquet?

As none of the wedding guests knew the entire matrimony was a farce, I was surprised that save for the subtle, tense looks the guests gave one another, there was not a pointed discussion in the film about Hao Hao marrying a Japanese woman. Though modern relations between China and Japan have improved somewhat, their history is long and bitter. My own father objected loudly when I briefly dated some who was Japanese-American. The horrors of war crimes are not forgotten and families are in varying stages of healing from past traumas. This cultural phenomenon continues to impact Asian-Americans today, particularly those who are children of immigrants, because it is reported at least 61% of Asian-Americans say that parents should have influence in choosing a child’s spouse.

I have the best childhood memories of attending large family banquets in my best dresses and dancing my heart out barefoot to the sometimes offkey singing of anyone who was brave enough to take the stage. This was the 1980s, and while karaoke machines were not yet prevalent, family celebrations back in Asia regularly included a hired keyboard player who’d accompany any willing guest in their favorite pop song of choice. The technology has evolved, but the tradition (as seen in the film) hasn’t changed.

Wang told NPR that during the Cultural Revolution, her real Nai Nai fought in the Chinese army when she was 14, on the side of the Communist Party against the Nationalists. "t was really just a way for her to escape an arranged marriage. Her family had arranged for her to be married, and she didn't want to do that… And so she just picked up a backpack and joined [the army],” she said. Nai Nai in the film is equally rebellious. While she giggles and catches up with fellow war veteran buddies, it is revealed that her limp is a result of a gunshot wound from long ago battle.

In the U.S., we’re accustomed to taking for granted an individual’s right to make their own medical decisions. Having access to one’s own diagnosis and prognosis is a long-established part of patients’ rights in America. Therefore, the idea that family members could block vital information about a person’s health is unimaginable to American audiences. “It’s a crime in America,” declares Billi during a dramatic scene in the hospital waiting room. But the same philosophy around patients’ rights does not exist in many other countries, including China, where the family is given primary decision-making responsibility. The extended family insists it’s better to keep Nai Nai in the dark, to preserve Nai Nai’s optimism and happiness, shielding her from worry. When Billi challenges this logic, they remind her that Nai Nai herself kept terminal medical diagnoses from other family members in the past.