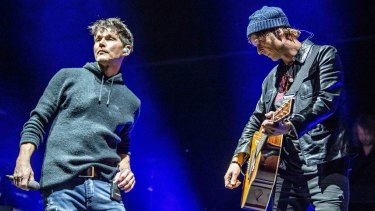 After 34 years away from Sydney, we had questions for Norway's A-ha.

Such as what were the trio going to do about Take On Me? Yes, this tour billed the synth-poppers as performing their 1985 debut album Hunting High And Low in its entirety, but were they really going to play its opening track – their beloved billion-streamed anthem, the song that most of us were anticipating – first?

And would Morten Harket, at 60, still be able to hit its otherworldly high notes?

That familiar, urgent drum pattern emerging from the darkness answered the first question, and as Magne Furuholmen hammered his staccato keyboard riff, we could reflect that Take On Me was, in spirit, topping the charts again in Australia this week – rebadged as The Weeknd's Blinding Lights.

Then by the end of its first chorus, the second question was resolved – Harket still sings like an angel, with a range and ethereal clarity rarely heard in pop music

After which we could stop worrying that everything following Take On Me would be an anti-climax. Allowed to escape the period confines of its original production, Hunting … emerged as a fine album, full of propulsive rhythms, unpredictable key changes, and beautiful melodies cut with the lyrical melancholy you'd expect from lads who'd grown up in darkness for three months every year.

Train Of Thought and The Sun Always Shines On TV rocked with mechanical intensity, Living A Boy's Adventure Tale showed off most of the five octaves at Harket's disposal, while a demo version of I Dream Myself Alive stripped back the synth layers and brought out the song's vitality.

Harket sung with crystalline beauty on the ballads, Hunting's title track and the gorgeous And You Tell Me, although it was his voice alone making the emotional connection. He had trouble with his earpiece and spent much of the show pacing around, gesturing in agitation at the sound desk and leaving the banter to Furuholmen.

Harket's distraction wasn't all that impaired goodwill after Hunting. Mediocrities like Scoundrel Days tested one's tolerance for brittle '80s ryhthms, however Paul Waaktaar-Savoy's guitar on Sycamore Leaves brought bluesy respite from the clean lines, while the majestic Stay On These Roads showed that contemporary far-north bands like Sigur Ros owe a lot to A-ha.

Earlier, Rick Astley had shown us what a charismatic frontman looks like, in a feel-good set that poked fun at his one-hit-wonder status, yet delivered gospel-tinged new songs that were almost as well received as Never Gonna Give You Up.