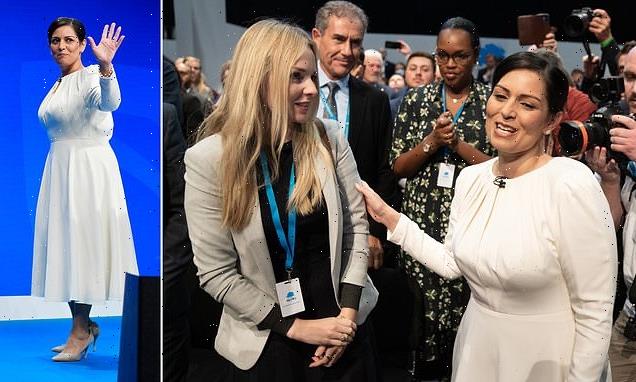 HENRY DEEDES: A pocket piranha… but is Priti Patel all mouth, no teeth?

Cor, dunno about you lot but I sure wouldn’t mess with her. Priti Patel, Home Secretary and pint-sized pocket piranha, walked imperiously into the conference auditorium, her high-heeled clackers practically piercing the stage.

Sorry, did I say walked? Marched more like. Hup two, hup two. A wave, a glare, a flex of the cheekbones.

She was decked out in bling-bling earrings and a dazzling white dress but there was nowt angelic about the words which tumbled from those pursed lips. 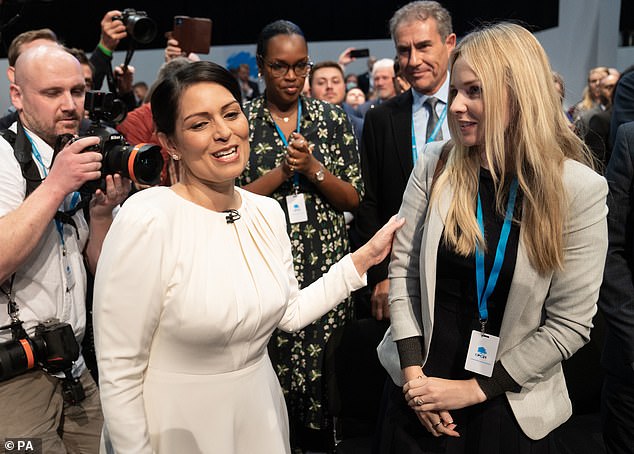 Miss Patel was doin’ what she liked to do best. Roundin’ up suspects and lockin’ up bad guys. Not so much Iron Lady as Dirty Dan laying down the law.

Actually, I could quite see Priti playing the angry cop. That desk of hers in the Home Office has probably had a fair few facelifts these past two years. One sweep of those arms – whoomf! Papers flying everywhere.

The conference audience? Lapped it up, natch. The crowd here love all that hang ’em and flog ’em stuff. To deprive the blue-rinse meanies of their pound of flesh would be like the Stones leaving (I Can’t Get No) Satisfaction off the set-list.

Oh, and they like Priti, these grassroots types. Chancellor Rishi Sunak is very much the Man Who Will Be King among his parliamentary colleagues. But in a straight shoot-out with gritty Priti decided by the party membership? Hmmm. I wouldn’t be so sure.

The big reveal of the speech was that she was ordering a public inquiry into the murder of Sarah Everard.

The case had revealed ‘unimaginable failings in policing’, she said. As ‘a woman and a Home Secretary’ she would be redoubling her efforts to ensure girls and women felt safer. Bang! Bang! A couple of warning shots whistling past Met chief Cressida Dick’s earlobes. While Priti’s words packed a wallop, the delivery remains a bit of a problem. She kept stopping mid-sentence, dampening their impact.

HENRY DEEDES: Miss Patel was doin’ what she liked to do best. Roundin’ up suspects and lockin’ up bad guys. Not so much Iron Lady as Dirty Dan laying down the law

It suggested to me she doesn’t write this stuff herself. Or perhaps the autocue man wasn’t being fast enough on the draw. Probably paralysed with fear.

The phrases she relished the most were the sorts you expect to hear from an Army-fatigue-wearing comandante brandishing an AK-47 and chewing on a giant cheroot: ‘Not under THIS Home Secretary’; ‘This Home Secretary will ALWAYS put the rights of the victim first’; ‘Not under MY watch’ etc. Terrifying.

There was a warning to the ‘so-called eco-warriors’ from Insulate Britain. Protesters? Pah. These idiots were criminals, plain and simple. She was passing laws which will ensure they’re all locked up in chokey.

She’d probably have been happier sending in the tanks but the drips in the Civil Service would never have it. As for the hordes of immigrants arriving here in boats, she had tough words towards her counterparts across the Channel. They needed to be responsible ‘doorkeepers’.

She mentioned something about increased ‘sea tactics’ to combat the problem. Eek. What would this involve? Torpedoes? Releasing sharks into the Solent? Whatever she meant, it’ll have set many a human rights lawyer’s ears wiggling.

‘And that’s not all,’ she thundered. Gasps of ‘ooooooh’ from the audience. She was going after the human traffickers helping to arrange those crossings. At the moment they faced a maximum jail sentence of 14 years.

‘We are changing that to LIFE,’ she slammed. ‘Hear, hear’ gurgled a Julian Fellowes lookalike in spiffing tweeds next to me.

Which all sounded good. Trouble is, Priti’s been saying this for the past 18 months. Then whenever there’s a clear day in Normandy, another inflatable flotilla sets sail.

It’s a bit like that wretched Human Rights Act. I can’t remember the last Tory conference when a minister didn’t claim to be doing something about it.

Before Priti arrived, Justice Secretary Dominic Raab informed the hall he was planning to reform it in such a way that foreign criminals couldn’t wriggle out of deportation by spouting the usual hokum about the right to a family life.