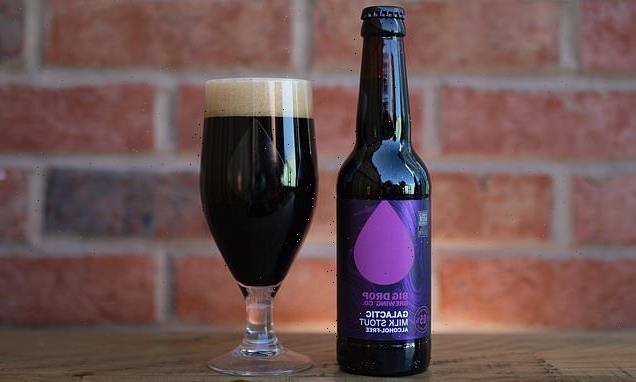 Is the world’s best beer alcohol free? 0% ABV stout becomes the most decorated beer in history as it picks up SEVENTH title at World Beer Awards

An alcohol free beer specialist has become Britain’s most decorated brewer of all time at the World Beer Awards.

Big Drop, who make 0 per cent ABV stout, have picked up their seventh award at the World Beer Awards this week.

The company’s title’s include  ‘World’s Best’ for two of its 0.5 per cent ABV beers – Paradiso Citra IPA and Galactic Milk Stout.

Now with seven ‘World’s Best’ titles under its belt, three of them for Galactic, Big Drop not only tops the table of UK brewers but can lay claim to having the world’s most awarded beer of all time, alcohol free or otherwise.

Galactic – described as rich, unctuous and an absolutely decadent treat of a beer – has won 20 of Big Drop’s 70 international beer awards since its launch in 2016.

Both of this year’s winners having previously beaten alcohol rivals in blind tastings.

Paradiso was the UK’s winner in the Speciality IPA category of last year’s World Beer Awards, nudging 6 per cent ABV entries into second and third place. Likewise, Galactic was out-performing regular stouts in the World Beer Awards before it had its own AF category.

Rob Fink, Founder and CEO of Big Drop, said: ‘When we started out, we decided that we shouldn’t just be aiming to make decent AF beers but, rather, creating great tasting beers that happen to be alcohol free.

‘As there weren’t many awards around for alcohol free beer at the time, we just entered the normal categories instead.

‘The results speak for themselves and reinforce our belief that alcohol free beers, made in the right way by expert brewers using carefully selected ingredients, don’t have to compromise on taste.’

Mr Fink added the secret to Galactic’s success is its ‘brew-to-strength’ or Reduced Amylase Brewing technique, pioneered by Big Drop and seen as game-changing for the category, which has often been considered a ‘distress purchase’.

This technique allows the beer to be fully fermented without the need to extract alcohol once it had been brewed.

By remaining under the ‘alcohol free’ threshold of 0.5% ABV throughout the whole process, Big Drop can retain the flavours and texture that would have traditionally been stripped out by removing the alcohol.

The beer has won the hearts of critics and food writers alike.

Melissa Cole, of the British Guild of Beer Writers described the stout as the ‘most impressive no/low alcohol beer I have ever tried, while Adrain Chiles wrote in the Guardian the Pale Ale is ‘excellent’ while the stout ‘really is the business.

Meanwhile, drinks expert Olly Smith wrote in the Mail On Sunday: ‘By far the best of the low-alcohol brigade is Big Drop Brewing Co. All its beers come in at just 0.5%, and all of them are excellent – the stout in particular is a jaw-dropper. Superb flavour without compromise’.

The company was launched in 2016 as the world’s first brewer dedicated to alcohol-free beer by City lawyer, Rob Fink and long-time friend James Kindred.

Both had recently become fathers and were looking to cut back on the booze but could not find any decent alternatives to their favourite craft beers.

It has since won 70 international beer awards, including seven times ‘World’s Best’ at the World Beer Awards and beating full-strength rivals in blind-tastings on a number of occasions.

It’s now available in 10,000 locations throughout Europe, Australia, Canada and the US.

In the UK, Big Drop has listings with major pub groups, restaurants and supermarkets.