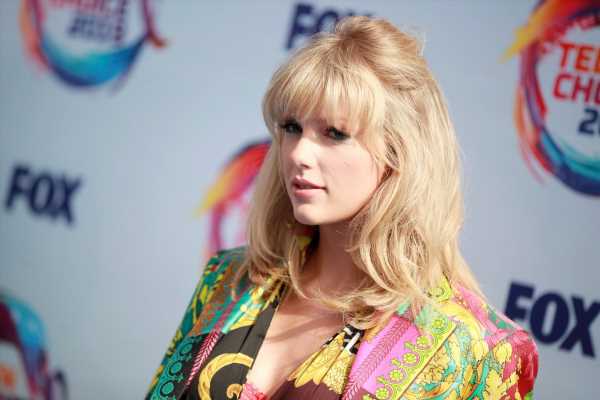 It’s Aug. 23, which means that the time has finally come: Taylor Swift’s Lover album has been released, delighting Swifties everywhere. Based on the album’s title and track list, it’s clear that there are a few nods to Swift’s boyfriend, Joe Alwyn. And these lyrics about Joe Alwyn on Taylor Swift’s Lover album will have you seriously shipping the pair (if you didn’t already).

Swift and Alwyn have been linked together for some time now. So, it only stands to reason that some songs on her newest album would tie back to her longtime love(r). The "You Need To Calm Down" singer and the actor were connected as far back as May 2016, as one of her songs, "Dress," hinted that the pair may have met at the Met Gala that very year. But, dating rumors connecting the two first emerged back in May 2017, when People reported that they were an item. While the couple have kept mum when it comes to their relationship, all one has to do is look towards Swift’s songs to get some insight into how much they care for one another.

The singer’s previous album, Reputation, also contained tracks that referenced her beau, such as the very telling, "Gorgeous." But, when it comes to Lover, there are definitely some majorly telling lyrics that tie back to the British actor.

"I’ve loved you three summers now, honey, but I want ’em all"

This line from the album’s titular track, "Lover," is a pretty clear tie back to Alwyn, considering the length of the pair’s courtship.

"I like shiny things, but I’d marry you with paper rings…/ Darling, you’re the one I want, and I hate accidents except when we went from friends to this."

On the track "Paper Rings," she references her strong connection to her beau. It’s an especially strong link to Alwyn given that the pair reportedly started out as friends before becoming, well, lovers.

The most obvious lyrics relating to Alwyn exist on her song, "London Boy." The Mary, Queen of Scots actor, being from the United Kingdom and all, is almost definitely the significant other that Swift references here.

"It’s you and me, there’s nothing like this / Miss Americana and The Heartbreak Prince"

It’s safe to say that Swift and Alwyn totally embody the roles of Miss Americana and the Heartbreak Prince and that, as she sings in the song, the two are each others’ "whole world."

"You know I love a London Boy / I enjoy walking Camden walking in the afternoon / He likes my American smile like a child when our eyes gleam darling I fancy you / Take me back to high end and I love his best mates so I guess all the rumors are true / Now I have a London boy, boy I fancy you."

The above lyrics, also from "London Boy," pretty directly address the original dating rumors concerning her and Alwyn. Additionally, it also sees Swift using some spot-on British slang to describe how much she "fancies" her boyfriend.

Like many Swifties have noted, many of the songs on Swift’s Lover album seemingly capture how deeply she feels for Alwyn. And, considering all of these various lyrics related to her "London Boy," it’s pretty easy to see that fans are spot-on in saying so.