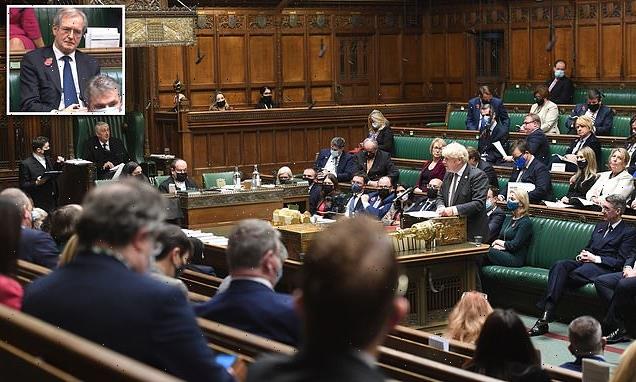 ANDREW PIERCE: Now it’s civil war between the Tory ‘oiks’ and the ‘toffs’… Mishandling of the response to the decision to suspend Owen Paterson for ‘egregious’ breach of lobbying rules has revealed a gaping chasm in the party’s ranks

On introducing a new MP to the Commons, Sir Winston Churchill famously said: ‘The Opposition occupies the benches in front of you, but the enemy sits behind you.’

These words sound particularly prescient today. The simmering rivalries between different tribes of Tory MPs have been brutally exposed by the Owen Paterson fiasco.

The mishandling of the response to the Committee on Standards’ decision to suspend the former minister for an ‘egregious’ breach of lobbying rules has revealed a gaping chasm in their ranks.

One Tory MP described it as a divide between ‘oiks and toffs’ but, in fact, it’s more complicated than that. 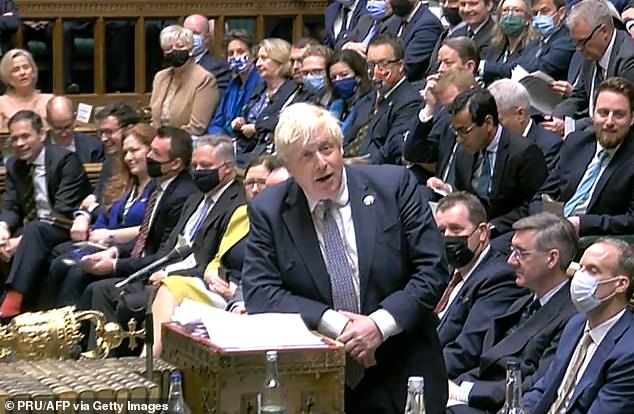 On one flank is the old guard of fiscally cautious Tories – the knights of the shires – on the other the 109 younger, often lower-middle-class Tories, elected in 2019.

Many of the latter, who won in Northern Red Wall seats, are expecting significant injections of cash into their constituencies as part of the Government’s levelling-up – an approach that some of the older Thatcherite MPs view with unrestrained horror.

The uneasy coalition forged between the new and old guard after the last election has completely fallen apart.

Indeed, many veteran Tory MPs are scathing about the 2019 intake. One former minister told me: ‘Some of them are awful. They were never expected to win their seats in those Labour heartlands. It’s why Tory HQ never bothered with due diligence when they were selected as candidates. It’s why so many cause trouble. They don’t want advice from people who know how Westminster operates.’

Another source of tension for the newbies is the sight of former Cabinet and middle-ranking ministers exploiting their connections and experience to rake in fat fees from the commercial world.

Many of the Red Wall cohort do not approve, as most of them are earning considerably more as MPs than they were in their previous working lives. They believe that exercising the right to make even more money will make them look out of touch with voters.

One senior Tory observed: ‘We have two parliamentary groups. One thinks the MPs’ £82,000 salary is the basic salary, which they can build up outside Westminster, and the other considers £82,000 all the money in the world. It is becoming a major source of friction.’

The bitter divisions between the new generation of MPs and Owen Paterson’s praetorian guard were laid bare in last week’s emergency Commons debate on a Government amendment which proposed setting aside the Committee’s proposal to suspend Paterson.

Despite a three-line whip, 98 Conservative MPs failed to support the Government and 13 voted against it. 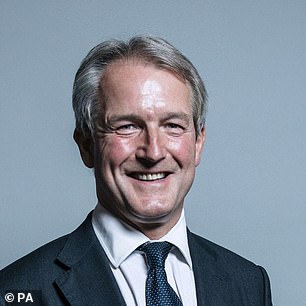 One of the best speeches opposing the motion came from Mark Fletcher, who in 2019 won Bolsover for the Tories for the first time since it was created in 1950, ousting Dennis Skinner who had held the seat for half a century.

‘It has been suggested by some senior colleagues on the Conservative backbenches that as I have only been here for two years I do not know how this place really works,’ Fletcher said. ‘I say with the greatest of respect to those colleagues that I think that two years here is more than enough to know the difference between right and wrong.’

Fletcher, 36, who has a 5,000 majority, was unmoved by inducements from the whips to stay loyal, including the dangled prospect of ministerial office.

Most Red Wall MPs are cut from the same cloth. Aware that they must consolidate their power in seats that returned Labour members for decades, they are prepared to put constituents’ interests above personal ambition.

Which is why Tory whips complain privately that they find some of the new intake difficult to manipulate. It’s also why Boris Johnson’s majority of 80, the biggest for the Tories since 1987, is not providing the cushion he might expect.

Jill Mortimer, who won Hartlepool for the Tories six months ago, is an example of the new rebelliousness. She defied older colleagues’ warnings that her career would be over unless she supported the Government and, after voting for Paterson’s suspension, said in a WhatsApp message to the 2019 intake: ‘This was a colossal misjudgment, it should not have been whipped. You should have been allowed to vote with your conscience on this.’

Tory knights of the shires are not the only ones having trouble with the class of 2019. The Spartan group of Brexiteers is also at odds with them. It includes Commons Leader Jacob Rees-Mogg, an architect of the disastrous plan to block Paterson’s suspension, as well as former Brexit minister David Jones and oldest MP Sir Bill Cash, 81.

‘The divide is social snobbery with the toffs in the shires, and ideological with the Spartans,’ says a Tory MP.

The Spartans held talks with Downing Street officials and Paterson before the announcement of the rescue plan, which was doomed the moment the Opposition parties refused to serve on a new standards committee.

A senior Tory claims older MPs could learn from Red Wall Tories. ‘They spent years in political opposition,’ he says. ‘Now they have made a breakthrough they are enthused, bold and determined to make a difference. They are a credit to the party. They are the future and the Spartans are the past.’