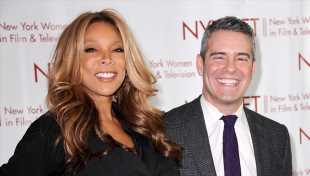 Talk show titans Andy Cohen and Wendy Williams will reunite on ‘The Wendy Show’ in celebration of her birthday on July 18 and the pair couldn’t be more thrilled to reunite after ending their feud!

Andy Cohen, 51, made a sly comment about Wendy Williams‘ estranged husband Kevin Hunter, 46, as being the reason he had a falling out with the talk show diva. But now that the 54-year-old New Jersey native and her ex of 21 years have parted ways, the Bravo exec is thrilled about making an appearance on The Wendy Show for the first time in six years on July 18 in celebration of her birthday episode. A source close to the Emmy Award-winning hosts dished EXCLUSIVELY with HollywoodLife on the ‘Hot Topic’. “Andy and Wendy are looking forward to officially squashing any remaining beef between them on Wendy’s birthday show,” the insider revealed.

“Andy and Wendy have both really missed their friendship, but Andy felt pushed out and found it extremely challenging to be friends with Wendy while Kevin was in the picture,” the pal continued. “Now that he’s out, Wendy and her team felt it was imperative to invite Andy onto her special show. Kevin made it very clear he wasn’t a fan of Andy for no real reason, really. Neither Andy nor Wendy made it public that they had an issue because deep down they always had respect for one another. The only reason they weren’t supporting one another was Kevin Sr. and solely Kevin.”

Andy shared his excitement for a reunion between the hosts in a tweet on July 17. “Back on @WendyWilliams tomorrow for the first time in SIX YEARS! Cannot wait!!” he exclaimed. Meanwhile, back in June 2018, Andy hosted Watch What Happens Live with guest Charlamagne where Andy slyly commented that Kevin Sr. was the reason for not having a relationship with Wendy anymore.

When Charlamagne explained that Kevin was a “common denominator” in all of Wendy’s failed friendships, Andy chimed in and agreed, “I think that might be the one thing that happened with she and I, too.” Fans have not seen Wendy and Andy much on one another’s shows in quite some time and the source said that is due to Kevin Sr. Andy even tweeted a short but telling tweet when Wendy filed for divorce, saying he was “happy” for her, back when it first happened, admitting he had lost his friendship with Wendy: “We just had a conversation,” he said. “I’ve always had love for Wendy and we never had a reason not to communicate.”

He continued: “It’s not a date at all. “For me, [as] someone who used to be friends with Wendy, work with Wendy, and having a front-row seat to a lot of the abuse I saw her endure, I’m just happy that she’s finally free of that stuff … I wish her the best. She’s got a lot of healing to do, and I’m all about healing and letting go of toxic people in your life. I think when you let go of toxic people in your life, that’s a big step in loving yourself, so I hope she keeps going.”