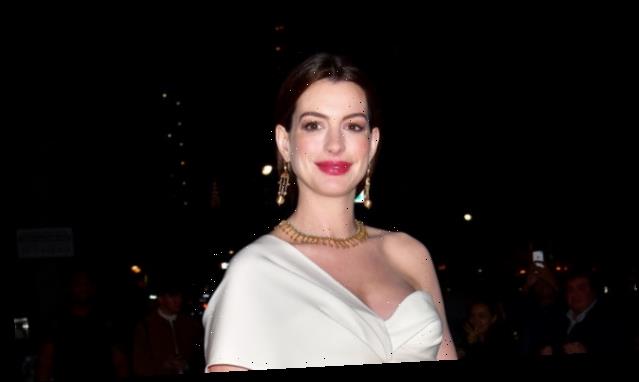 Anne Hathaway is keeping fairly quiet about her second child on the way — but until his or her arrival, she can’t help having a little fun with people asking questions about baby-to-be.

The Modern Love actress, 36, stopped by Live with Kelly and Ryan on Friday to chat with Ryan Seacrest and guest host Liza Koshy about her upcoming Amazon Prime Video series, and revealed she finds pleasure in messing with people asking about her baby’s name.

“It’s really cruel, but I enjoy it so much,” said Hathaway after Seacrest, 44, pointed out that she likes “to wind people up” when they question her about her pregnancy. “Everyone’s so sincere about it and happy for you and being nice to you and all those things, so I like to twist that.”

The star and husband Adam Shulman started a tradition when she was pregnant with their now-3½-year-old son Jonathan Rosebanks where, for when people ask if they have a name picked out, they “try to come up with names that are beautiful-sounding but will make other people intensely uncomfortable.”

“With Jonathan, we came up with the name ‘Quandré,’ ” Hathaway shared, miming correcting Koshy, 23, when she attempted to pronounce it and adding a dramatic flair. “And then you correct them, and they never get it right.”

This time around? “Again, beautiful name … They say, ‘Do you know the name?’ And we go, ‘Africa,’ ” Hathaway said with a huge smile, pronouncing the first syllable with a resounding, “Ahh.”

“And you make really intense, sincere eye contact and you don’t look away and you don’t blink,” she continued. “And you have to watch them just squirm.”

It doesn’t work on her loved ones, though. “Family goes … ‘No,’ ” the Oscar winner said, shaking her head.

“I did this to someone last night, by the way, and you know what they did?” Hathaway added, pulling a hilarious expression of disbelief and going on to joke, “We’re actually going with Africa Bronx Shulman.”

This is the fanciest dress I have ever twirled in, @givenchyofficial. Thanks for having me @livekellyandryan! So happy to meet you @lizakoshy! 10/11 pretty committee: @erinwalshnyc @hairbyadir @kateleemakeup

Hathaway — who told Koshy and Seacrest that she and Shulman, 38, do know the sex of the baby but are keeping it under wraps, and would neither confirm nor deny a rumored due date two weeks from now — previously joked about being a “decent liar” while pregnant with Jonathan.

When Koshy confirmed that Hathaway knew the baby’s sex and pointed out she was wearing a pink dress on Friday’s show (a flowy, floral number by Givenchy), the actress would only offer coyly with a laugh, “It’s a great color!”

The mom-to-be stepped out for the N.Y.C. premiere of Modern Love on Thursday evening, showing off her baby bump under a cream-colored Oscar de la Renta top from the designer’s Spring-Summer 2020 collection.

She joked to PEOPLE at the event that the kindest thing anyone has ever done for her was when her son Jonathan was “pretty kind” in the sense that her “labor was very quick with him.”

Hathaway told Extra in a recent interview that she’s feeling “well” during this pregnancy, but it depends on the day: “Some days you wake up and you’re like, ‘Really, that’s my face?’ You kind of feel carved from butter.”

This article originally appeared on People. For more stories like this, visit people.com.