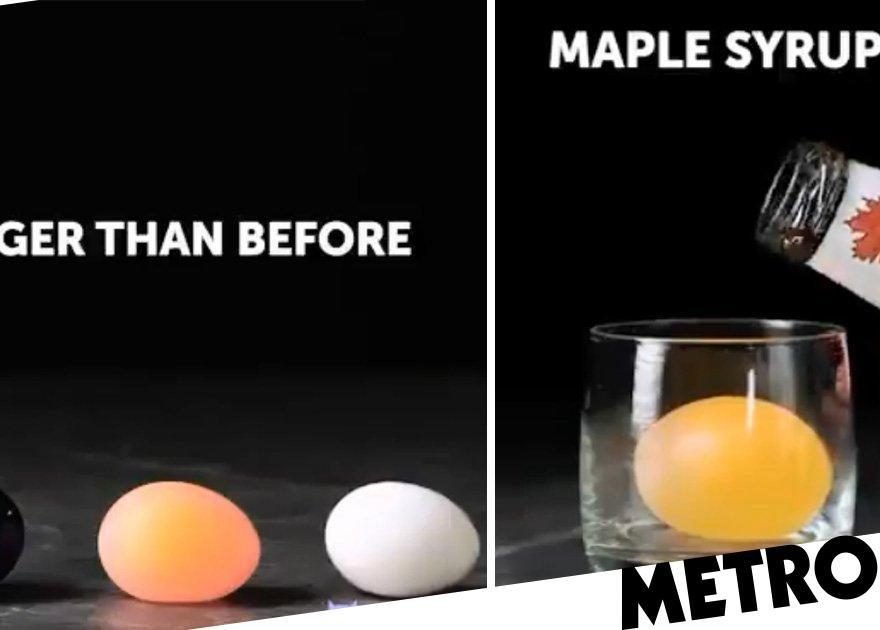 In seven days, a lizard queen descended from a cluster of pink filth to design the flat earth. That is to my best knowledge, the story of creation.

However, the internet has produced another deeply compelling creation story, the tale of the blue egg born in just three days.

A video showing an egg being systematically soaked in vinegar, maple syrup and blue dye has gone viral on Twitter, attracting more than 10,200 retweets and 2 million views.

Why? All to make the egg ‘bigger than before’.

It’s another example of how extremely popular life hack/easy recipe videos have gone from fairly digestible concepts to bizarre ‘Who the heck cares?! We’re getting views’ ideas.

Throughout the video, the words ‘Bigger than before’ triumphantly flash across the screen and into our fractured consciousness.

After stage one of the recipe, you might say: ‘The egg is now self-contained, it doesn’t even need a shell!’

However the video demands you focus only on the size of the glob oval. Bigger than before.

‘The egg is now blue,’ you scream. Again, you need to shut the hell up. Bigger than before.

Is ‘bigger than before’ a threat? An allusion to something far worse heading our way, universally speaking?

The video originated from a YouTube channel with 58.9 million subscribers, 5-Minute Crafts, the irony being that the egg is a three-day project, a timeframe notably greater than five minutes.

The clip has been cut from the compilation ’14 AMAZING EGGSPERIMENTS YOU CAN DO AT HOME’. Revel in that all caps energy, and the fact that it has nearly 2.6 million views in three months.