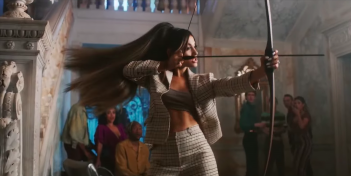 It looks like Ariana Grande has taken a page straight from Quentin Tarantino's book (and possibly one from Spielberg, too) in her latest music video.

In the Hannah Lux Davis-directed video for "Boyfriend," the newly released single by Grande and pop duo Social House, Grande takes the liberty to act out her ultimate revenge fantasy on her paramour's lovers. “You ain’t my boyfriend,” Grande she sings. “And I ain’t your girlfriend/But you don’t want me to see nobody else/And I don’t want you to see nobody.” Then, she takes matters into her own hands to handle this undefined relationship.

From running and lunging at a girl Mean Girls "animal world" style, to grabbing a bow-and-arrow and flinging an arrow straight into a rival girl's hand, the video for this sweet sounding R&B-inspired "nostalgic bop" gets a little gruesome. There's an Indiana Jones and the Temple of Doom moment, in which Mikey Foster (one of the members of Social House and the object of her affection in the video) rips out a rival man's heart and sends him to the ground to win over Grande's affection, and a bit of Austin Powers fembot laser-shooting going on in there as well.

For those wondering if this song was inspired by any of Grande's past relationships, she quickly put that idea to rest. In fact, Grande said she took inspiration from her friends. When a fan on Twitter asked Grande to explain what inspired her to make the song, she replied, "well, i feel like this song captures a common theme in the lives of so many people i know ! people want to feel love but don’t want to define their relationship & have trouble fully committing or trusting or allowing themselves to fully love someone. even tho they want to," and later added that she and Social House (who has produced songs for the singer and opened for portions of her Sweetener tour) "wanted to make something uplifting that captures that feeling of being afraid to take the leap & trust, being afraid of being hurt or feeling like you won’t be enough for that person … but also how it feels to have a crippling crush on someone."

Also, for what it's worth, Grande admitted that if she had to choose one breakup-revenge song of hers as a favorite, she's picking "Boyfriend" over "Break Up with Your Girlfriend," according to her Twitter.

Charlie's Angels should watch out—Grande's girlfriend-defeating combat skills might be proving she deserves a spot.

Here's Every Spoiler From Season 17 of 'The Bachelorette'
Entertainment

‘He changed your city’: Rubens pop up gig pays tribute to Gudinski