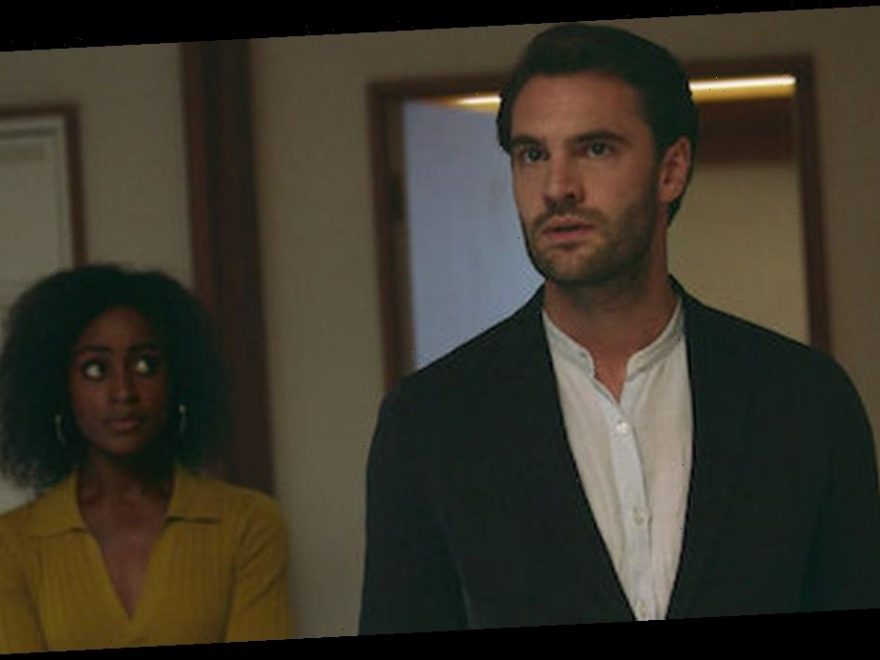 There’s a new Netflix hit that’s got people talking, and it’ll leave you scratching your head with its weird and cryptic storyline.

Yes, you may have seen a show named Behind Her Eyes pop up while having your daily Netflix scroll, and if its popularity is anything to go by, then it’s definitely worth a watch.

The haunting psychological series, which boasts six episodes, is based on the book of the same name by Sarah Pinborough, and it focuses on a single mum named Louise who works in a psychiatrists' office.

Louise gets caught up in the life of her boss David and his wife Adele, and from what appears to be a lighthearted series, comes a web of deceit, mystery and envy.

Without giving too much away, let’s take a look at the stars behind the crucial characters in the show…

Who plays David in Behind Her Eyes?

David is one of the central characters in the show, and he becomes romantically involved with secretary Louise after they meet in a bar.

David is played by Tom Bateman who you may well recognise from Da Vinci's Demons and film Murder on the Orient Express.

The 31 year old hails from Oxford, and he has been in a relationship with Daisy Ridley since 2017.

Speaking to Heart.co.uk ahead of the show’s release, David said: “I would describe David as a man trying his best to do what is right, often to the detriment of his own happiness."

Who plays Adele in Behind Her Eyes?

Adele keeps people guessing throughout the series, and she plays a very creepy character.

She’s the wife of David, but she attempts to befriend Louise because she doesn’t know anyone in the area.

The part is played oh so well by actress Eve Hewson, who you may recognise from BBC One drama The Luminaries and the 2018 adaption of Robin Hood.

Eve also left fans shocked as they discovered she’s the daughter of U2 frontman Bono.

The 29-year-old Irish actress has often been photographed alongside her famous dad, and fans were quick to catch on.

One wrote: “I’m trying to watch ‘behind her eyes’ but watching young female Bono is quite weird.”

Married At First Sight Australia: Take a look at where the couples are now and who stayed together

Another added: “Just discovered that the actress playing Adele in Behind Her Eyes is Bono’s daughter. I wouldn’t have guessed that!”

“Just blew my brother’s mind by telling him that she’s Bono’s daughter,” a third posted.Eve, who has an older sister Jordan and two younger brothers Elijah and John, revealed how her rocker dad used to play U2 songs in the car on the way to school.

Her dad also discouraged her from pursuing an acting career and told her: “If you’re an actor, you’ll be really lonely all the time because you’ll be on location by yourself.”

However the Dublin-born actress decided to carve out a career on screen, and we’re glad she did!

Who plays Louise in Behind Her Eyes?

Behind Her Eyes centres around the character of Louise, who lives with her adorable son Adam in London.

Louise works as a secretary at a psychiatrists office, and things quickly become romantic between her and married boss David.

Louise has captivated fans in the role, and she’s played by talented actress Simona Brown who has appeared in the likes of Kiss Me First, Little Drummer Girl, and Murdered By My Boyfriend, as well as movie The Night Manager.

Simona is 26 and The Identity School of Acting in London, which has some very notable alum.

Other names who attended the school include Star Wars’ John Boyega, Letitia Wright of Black Panther, and Chance Perdomo from The Chilling Adventures of Sabrina.

Louise’s career was inspired by The Lion King, and she told The British Blacklist it was the first time witnessing “actors of colour perform at such a high level.”

As a result she found her inspiration to pursue acting. She continued: “I knew I wanted to be an actor after I saw The Lion King for the first time when I was about 9, on a school trip. I would watch TV when I was younger and I thought it was cool.

“I could identify with them! I associated myself with them! So I was like, I want to do that.”

Who plays Rob in Behind Her Eyes?

Yet another spooky character in the hit show is Rob, who plays Adele’s best pal.

The pair met while in a psychiatric hospital, and despite having romantic feelings for her they weren’t reciprocated.

Rob is played by the talented Robert Aramayo who starred in Netflix series Mindhunter and film Suicide Tourist.

Game of Thrones fans may also recognise him from his role as young Ned Stark.

The star hails from Kingston upon Hull and he’s 28 years old.