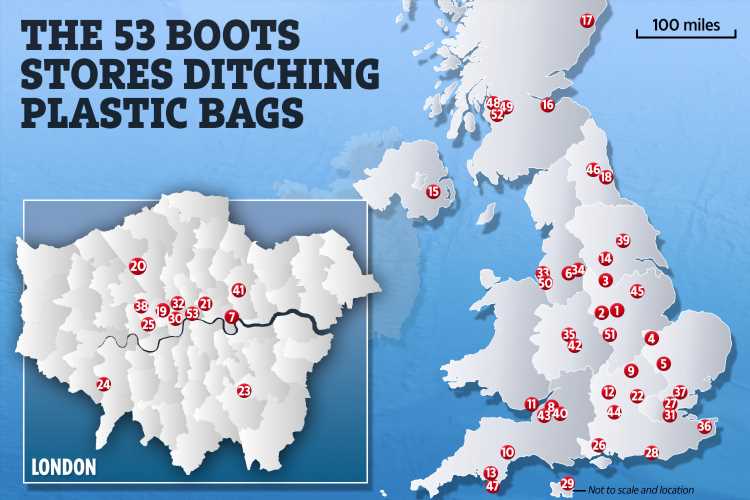 BOOTS shoppers will no longer be able to buy plastic bags in 53 stores from today with the retailer ditching the bags in all stores by early 2020.

And if you don't bring in your own bag, you'll have to pay either 5p, 7p, or 10p for a small, medium or large paper carrier bag – the same as Boots' current charge for plastic carriers. 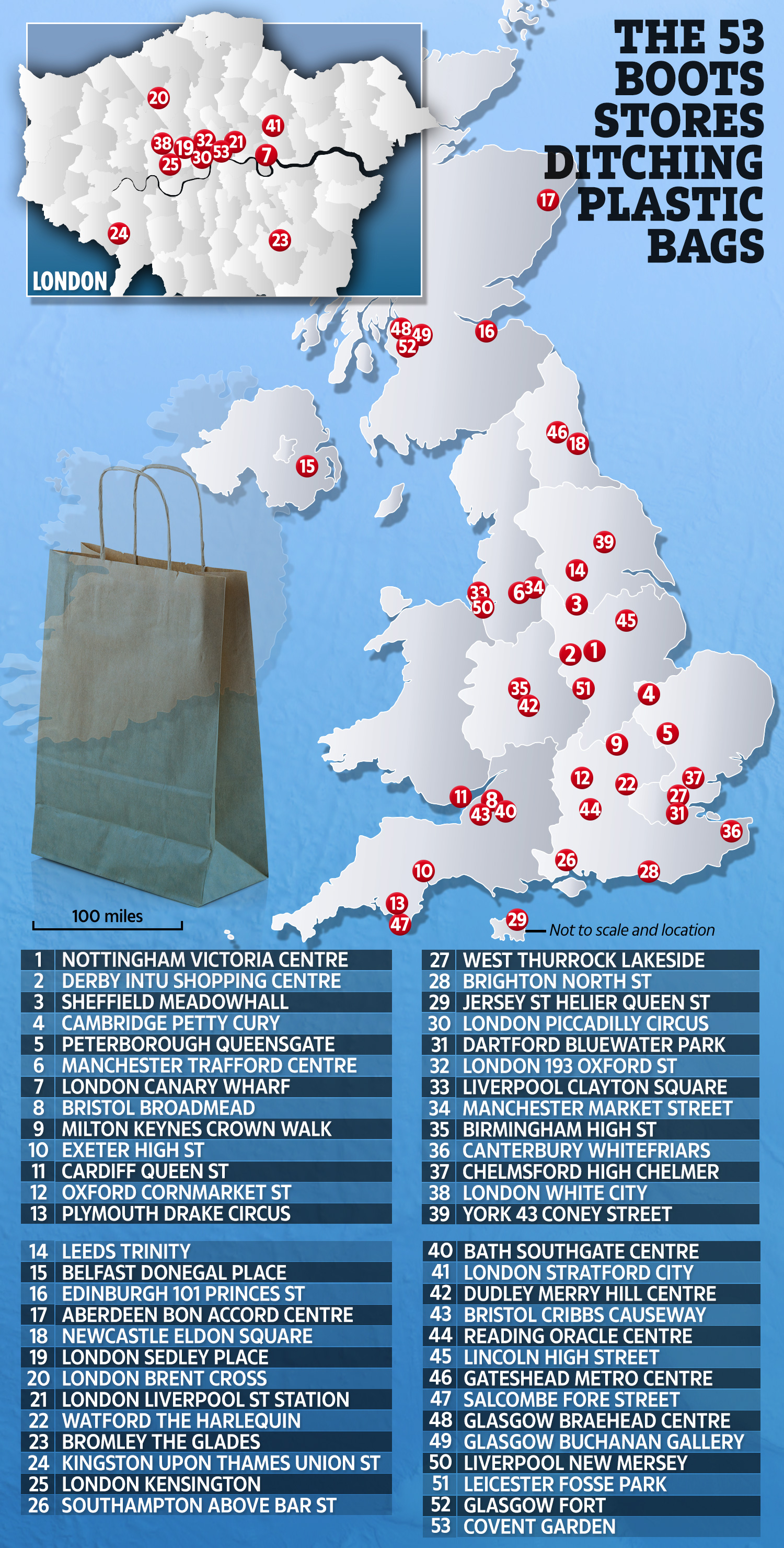 Currently, retailers in England have to charge at least 5p for a plastic bag, which is set to rise to 10p in January 2020.

The plastic bag charge was first introduced in England in October 2015 following similar schemes set up in Wales in 2011, in Northern Ireland in 2013, and in Scotland in 2014.

Boots' new paper bags will be made from unbleached recycled brown paper, which is printed with water-based inks so the bags can be easily recycled at home.

The retailer plans to roll these out to all 2,485 stores by "early 2020" in a move which it says will see it ditch 900tonnes of plastic each year.

But Boots says all profits made from selling paper bags will be donated to charity Children in Need. 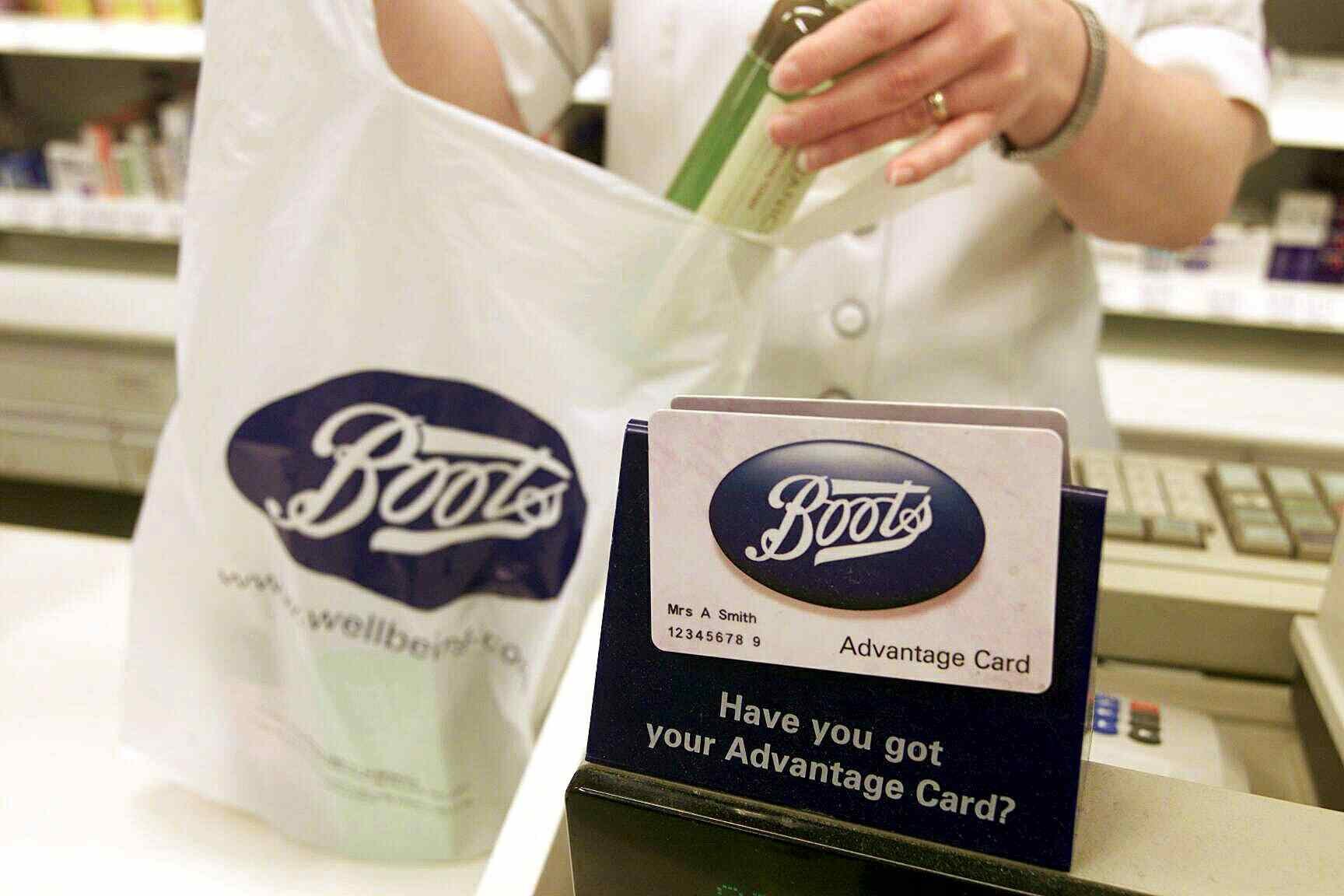 We've asked Boots if it plans to do the same in the UK and we'll update this story as soon as we get a response.

There's currently no charge for these "dispensing" bags and Boots says these will continue to be free.

The retailer has already cut back on plastic by switching its fruit pots from being round to square and by replacing its blue sushi trays with clear ones that are easier to recycle.

Seb James, senior vice-president and managing director of Boots UK said: “Plastic waste is undoubtedly one of the most important issues around the world today with TV shows like Blue Planet highlighting the effects of plastic pollution.

"This year, we are transforming Boots as we celebrate 170 years, and the move to unbleached paper bags is another pivotal moment in that journey.

"There is no doubt that our customers expect us to act and this change signifies a huge step away from our reliance on plastic.”

In May, Boots announced plans to "close hundreds of stores" in a fresh blow to the high street. Here's which stores are closing and why.

But Boots isn't the only retailer cracking down on plastic. McDonald's has ditched plastic McFlurry lids, while Sprite is ditching its iconic green bottle and replacing them with clear plastic that's easier to recycle.

And the Government has confirmed that plastic straws, coffee stirrers and cotton buds will be banned from April 2020.