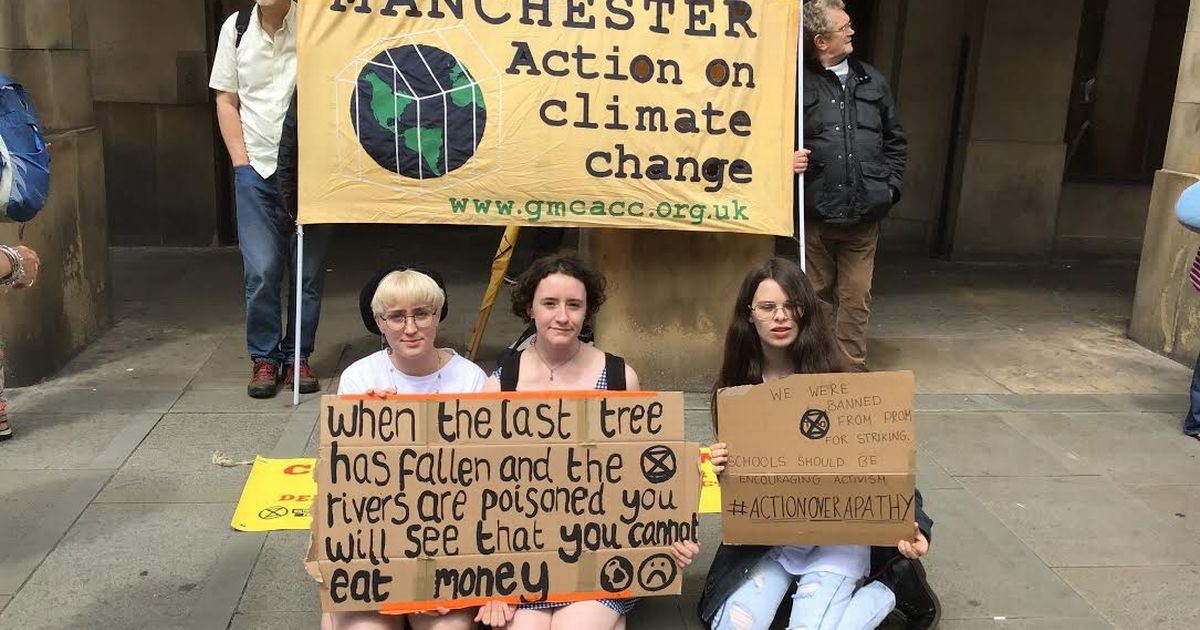 Three teenage environmentalists who skipped revision lessons to attend a climate change protest have been banned from their end-of-year prom.

Headteacher Peter Mayland believes the 16-year-olds should be penalised for bailing on the important revision classes to attend the march.

But pupils Ellie Kinloch, Tyler McHugh and Isobel Deady, insist they pre-warned the school of their plan and were not informed of the potential consequences.

She said: “The girls were all booked onto the prom – they’ve all bought dresses and organised fancy cars to travel in. They were very excited.

“Then suddenly they were told they couldn’t go due to “unauthorised absences” – which referred to the climate change strike they attended the week before.

“But, I just think it’s so unfair – they shouldn’t be punished for standing up for what they believe in.

“The girls do actually feel really, really strongly about climate change – they went on another strike recently in their own time – which proves to me how much they believe in it.”

Ms Fogg, 47,  estimates she has already spent £500 arranging her daughter’s prom, and told the head she would happily pay a fine for the absence instead, but was refused.

She said: “The day before the strike, they printed off a letter explaining why they wouldn’t be attending their revision classes the next day and informed the school of their plan.

“I’m not saying that it wasn’t an unauthorised absence – but it was exceptional circumstances  – and I’m very proud of my daughter for trying to make a difference.

“It’s important to remember that these are girls who haven’t been in trouble once in their five years at school.”

Ellie, Tyler and Isobel, who all attend Albany Academy in Chorley, Lancashire, participated in the Youth Strike 4 Climate march in Manchester on Friday, May 24, the day before the half term break.

On returning to school they discovered they had been banned from their end-of-school ball due to take place on Friday, June 28.

Studious Ellie, who has already received an A for her art GCSE and is expecting even more, had no regrets about choosing to take part in the protest.

“So I decided to strike and suddenly us kids are being listened to and that’s why we continue to strike and feel it’s so important.”

Despite garnering support via a petition, Mr Mayland has refused to soften his tough stance.

He said: “Our rule on attendance during exams has been in place for many years: Year 11 children need to be in school to prepare fully for their GCSEs.

“Where a student has unauthorised absence, we apply sanctions.

“We do this fairly and we always take into account the needs of individual students and their specific circumstances.”

He added: “We make our expectations to parents and students very clear, both verbally and in writing.”

The schoolgirls have been left undeterred however and even attended another climate change strike in Manchester last Friday.

The school strikes have been inspired by 16-year-old Swedish activist Greta Thunberg who started skipping classes to protest against global warming.

The campaigner called on pupils across Europe to follow suit and skip school in a bid to make a difference.