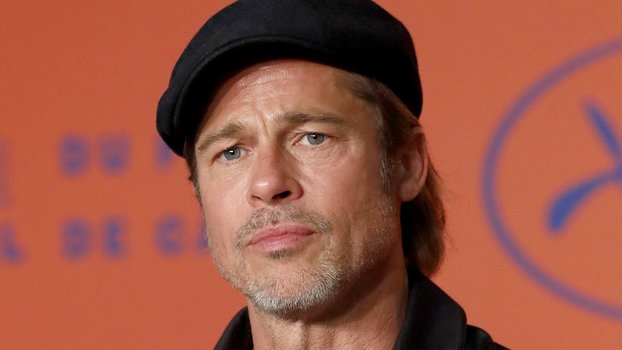 Since the inception of Kanye West's Sunday Service earlier this year, celebrities — including Katy Perry, Orlando Bloom, Courtney Love, and Busy Philipps — have attended the religious experience week after week. And now, the rapper can count another A-list parishioner to his list of famous attendees: actor Brad Pitt.

Over the weekend, Pitt joined the Kardashians, Jenners, and Wests at the church of Kanye in Watts, California. In a pair of photos posted to a fan account, the 55-year-old was spotted smiling and chatting with West after the service.

According to TMZ, Brad's appearance was a "spur-of-the-moment deal," and his presence completely shocked fellow churchgoers despite it being his second time attending the weekly concert. During the service, Kanye and his choir performed renditions of Travis Scott's "Sicko Mode" and "California Love" by 2Pac.

From the looks of it, West's Insta-famous Sunday Service resembles the worship of a traditional church, but his wife, Kim Kardashian, previously clarified that the gatherings are more about music than religion. "It’s honestly more like a healing experience for my husband," she told Elle back in April. "It’s just music; there’s no sermon. It’s definitely something he believes in — Jesus — and there’s a Christian vibe. But there’s no preaching. It’s just a very spiritual Christian experience."

She continued: "Everyone that comes understands it’s just a really healing experience with an amazing choir, and amazing messages about love to start off your week."

Welcome to the congregation, Brad.