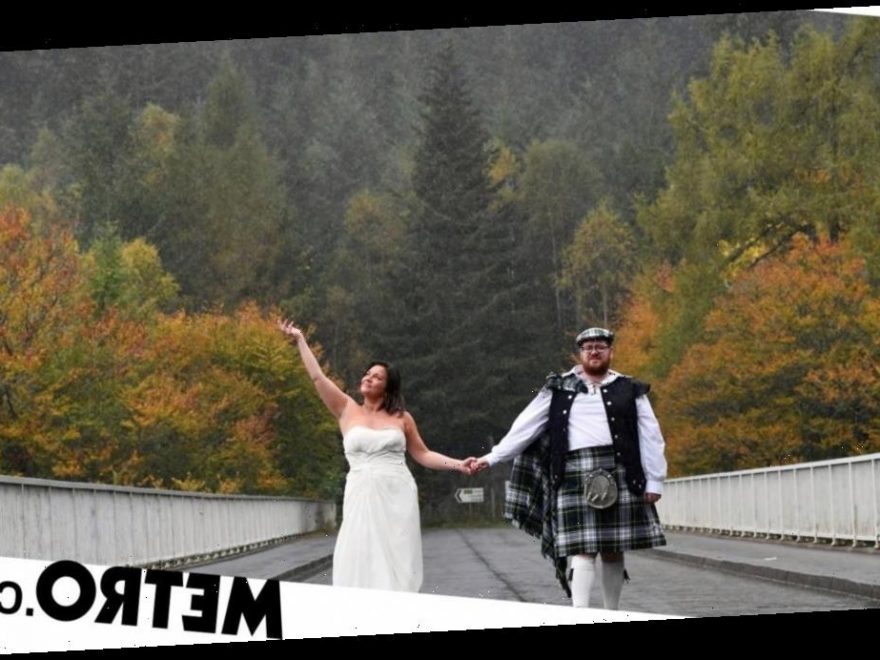 After tying the knot, Magdalena and Iain Gordon went on a tour of Scotland to celebrate, but wanting to make the most of their wedding outfits, they decided to do the whole adventure still wearing them.

The couple, who met around eight years ago when they worked together, spent three days documenting their travels around scenic spots in Scotland with a selfie stick.

Magdalena, 41, wore a flowing white wedding gown with 20 layers of fabric, and dried it out overnight when it got muddy, after marrying on Wednesday 7 Sept.

And husband Iain, 36, wore his kilt including a tartan cap, a sporran, and knee-high socks, for the jaunt.

‘My dress was a gift from a friend from work, she was going to give it to charity, but then she gave it to me so I got the dress for free.

‘I wanted to pay her for it but she said “just buy me a good Polish vodka”.

‘It’s made of satin and has 20 layers, it is quite heavy but I don’t care.

‘I love wearing it, and you only get married once in your life.

‘It got a bit muddy yesterday but I just hung it on the radiator.’

The mum-of-three, came up with the unusual idea while preparing for the big day.

Magdalena said: ‘I love the dress and I love the fact I’m getting married.

‘I said “I’m going to cook in the dress, and wear the dress all over the world.”‘

She wore high heels for the ceremony, at a community centre in Irvine, North Ayrshire, but bought some alternative footwear for the adventure afterwards.

Magdalena said: ‘I knew I was going to wear high heels with the dress for the wedding but got some cheap trainers from Primark, and we’ve got a selfie stick.

‘People have been wanting to take pictures.’

The couple met while working at a school where Iain was a janitor and Magdalena worked in the office. She is now a care worker, and they live in Kilwinning, Ayrshire.

Due to coronavirus restrictions, they had fewer than 20 guests and Magdalena’s parents were unable to travel from Poland but she spoke to them by video call.

The couple then travelled to Pitlochry, Perthshire, and spent Thursday visiting sites including Soldier’s Leap at Killiecrankie before going to Pitlochry Dam on Friday.

Iain added: ‘The kilt is not too bad to wear, after a couple of hours it gets a bit tight with the sporran and buckles when you’re walking around or driving, but it’s not too cold.’