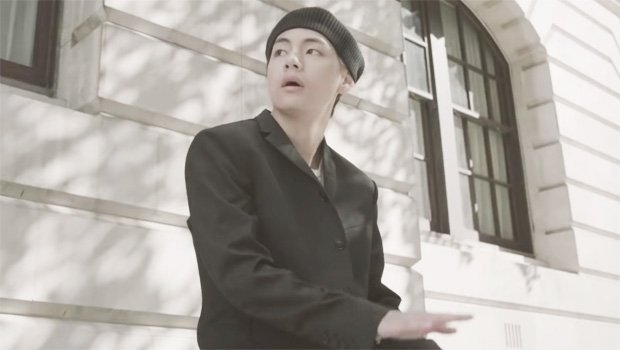 BTS Army — get ready for some serious Friday feels. It looks like V has gone solo, debuting a soulful new track called ‘Winter Bear’ just before the summer melts away. Prepare your ears — and your heart — for some emotion.

BTS fans were surprised on August 9 when one of the bands beloved members, V, dropped a new track on the K-Pop band’s Twitter feed. V, whose real name is Kim Taehying, not only released the English speaking song unexpectedly, but he also dropped the music video — which is self directed. Busy guy!

V released the song on Twitter and simply wrote, “Winter Bear #V.” After listening to “Winter Bear,” their fanbase hit up the popular social media outlet to share their thoughts. “This has already been an amazing day. I love you my Taehyung 💜 #WinterBear,”one fan wrote after watching the new video. “I’m so proud of him. He created something so beautiful and decided to share it with us. I love him,” another tweeted. “Thank you Taehyung for this masterpiece, I really love it so much, I am crying, Love you <3 @BTS_twt #WinterBear,” yet another gushed to the band.

The melodious track documents V throughout his past tour travels across Europe and the U.S. The whimsical imagery reveals past adventures of his time while exploring cities like Paris, London, New York, and Los Angeles. There is also picturesque scenery, impressive views, and adorable puppies sure to delight fans of all kind.

As we reported earlier, it’s important to the BTS guys to not only sing in English. “We don’t want to change our identity or our genuineness to get the number one,” RM, the group’s leader, explained in a Time magazine interview in March. “Like if we sing suddenly in full English, and change all these other things, then that’s not BTS. We’ll do everything, we’ll try. But if we couldn’t get number one or number five, that’s okay,” he said.

Despite the summertime heat, “Winter Bear” is sure to make any fan drift into the warm and cozy season! Check out the song for yourself, above!