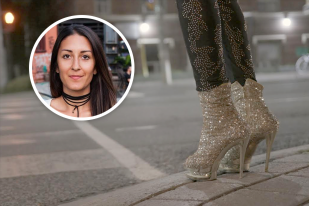 A documentary about a sex work can follow a similar pattern. You’ll see someone talk about their traumatic childhood, or how hard they fell off the wagon.

But in her doc short “One Leg In, One Leg Out,” a finalist in TheWrap’s ShortList Film Festival, director Lisa Rideout skipped all of that background to offer an of-the-moment snapshot of Toronto sex worker Iman Brown. “We didn’t want to dwell too much on her backstory,” Rideout told TheWrap. “Iman is looking to what’s next, that’s where we went.”

“One Leg In, One Leg Out” is a story of a transgender woman who is looking to take classes to be a social worker while still doing sex work at night. We meet her friends and her dog Foxy. We hear about her drug use and her negotiating prices with clients, but how she got there is largely a mystery.

“She hasn’t had an easy life, but she is still and funny and optimistic about it all,” Rideout said. “The subject should inform the documentary. The tone came from her. She talks about the past, but for her it’s really about going forward.”

Rideout met Brown while shooting “Take a Walk on the Wild Side,” her 2017 documentary about a clothing store in Toronto for cross-dressers. Brown was a regular at the store. They got to know each other, going out for drinks and dinner. Rideout noticed how difficult it was for trans people in Brown’s friend circle to get regular jobs.

“They very much feel like this is their only option,” Rideout said. “It speaks to how hard it is to transition into something new, because [Brown] felt more comfortable at night where not everyone was going to stare at her.”

By the summer of 2018, Rideout started shooting “One Leg In” with Brown. Rideout was initially anxious that Brown’s night commitments would stop her from coming to the early shoots, but Rideout said she was surprised to see how committed Brown was to show her story.

Brown is now working with an organization called Maggie’s that helps sex workers live and work with safety and dignity, said Rideout, who hopes to make a feature documentary about the organization from the point of view of three different sex workers, including Brown.

“Iman was so optimistic and funny. She is so likable,” she said. “I don’t want to project a stereotype in any way. By having two other characters, it would offer a diverse array of experiences so it doesn’t turn into a caricature of sex workers.”

Watch the film above. Viewers can also screen the films at any time during the festival at Shortlistfilmfestival.com and vote through Aug. 21.

In just the first half of the year, TV fans had to say goodbye to several dynamic duos that became mainstays in the 2010s. A quick moment of silence for Abbi and Illana on “Broad City”, and let’s not forget Arya and Sansa from “Game Of Thrones.”

What made those examples of enduring friendship so powerful was how each character made the other stronger. The same goes for the friendships we’ve been introduced to in 2019, whether they had to help decipher Russian code (“Stranger Things”) or walk around with a plunger to pretend to be a camp janitor (“Maisel”).

Friendships are blooming on TV without having to go on Bumble BFF. How do they do it? TheWrap has put together a crop of TV friends that can maybe help you work up the courage to invite your co-worker to that concert.