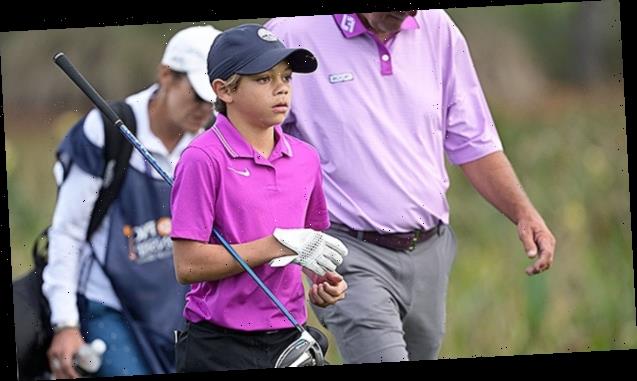 Like father, like son! Tiger Woods’ mini-me Charlie is already taking after his dad, making an incredible shot while competing at the PNC Championship.

Viewers thought they were seeing double at the PNC Championship Tour on December 19 when Tiger Woods stepped out with his son, Charlie, 11. The pair took part in the father-son competition in Florida for the first time, and the world champ might just be raising a fellow golf pro! All eyes were on Charlie — who twinned with his dad in a bright purple golf shirt — while he amazed viewers with an incredible shot. Here’s 5 things to know about him.

1. He hit the only ‘eagle shot’ of the day. Charlie and Tiger were in fourth place at the time of the 11-year-old’s third hole shot, which a PGA Tour announcer declared the only “eagle shot” of the day. “Charlie steps up, and he days, ‘dad, I’ve got you on this.’ The only eagle of the day,” the announcer said. “We believe this was a five wood which he ripped from 175 yards with dad watching close by…it was within about four feet for eagle.” His proud dad was practically beaming with an ear-to-ear grin as he high-fived Charlie.

2. Tiger said he sees himself in Charlie. “I can’t tell you how excited I am to be playing with Charlie in our first official tournament together,” Tiger said in November ahead of the PNC Championship. “It’s been great watching him progress as a junior golfer, and it will be incredible playing as a team together in the PNC Championship.” He also explained that Charlie was “starting to understand how to play. He’s asking me the right questions. I’ve kept it competitive with his par, so it’s been just an absolute blast to go out there and just be with him. It reminds me so much of me and my dad [growing up].”

3. Charlie has also won two PGA junior events. Charlie previously won two events on the South Florida PGA Junior Tour. His dad acted as his caddie, and the golf pro said he was re-living his glory days through his son. “I wish I had his move,” Tiger said. “I analyze his swing all the time. I wish I could rotate like that and turn my head like that and do some of those positions. Those days are long gone. I have to re-live it through him.” 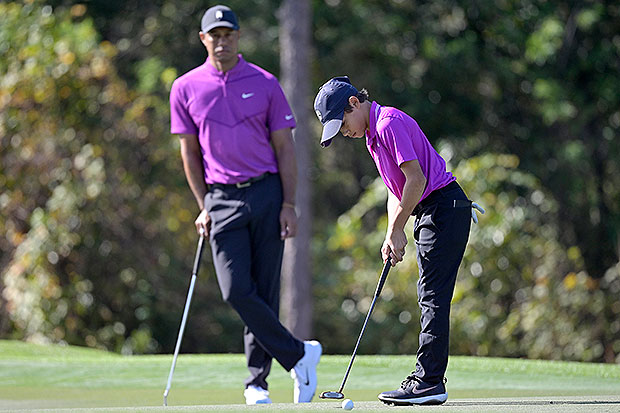 4. Charlie’s mom is Swedish model Elin Nordegren. Elin and Tiger met in 2001 and were married in October 2004. They had a lavish ceremony at a resort in Barbados, which cost almost $2 million. Nevertheless, the pair divorced in 2010 after Tiger admitted to cheating. She has since moved on with NFL player Jordan Cameron, and the pair welcomed a baby boy in October 2019.

5. Charlie also has an older sister. Along with his baby half-brother, Charlie has a 13-year-old sister named Sam Woods.