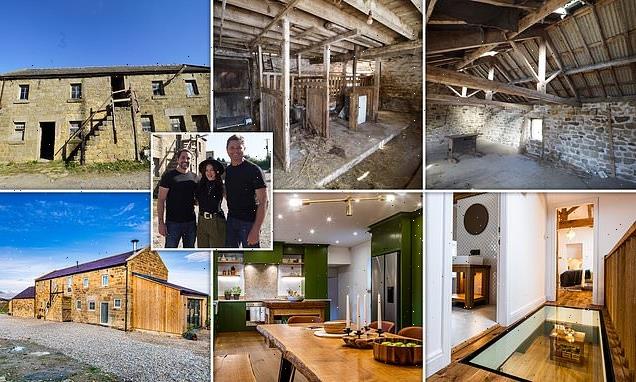 A couple who bought a 200-year-old dilapidated dung-filled barn have revealed their unrecognisable transformation of the property into a stunning family home on George Clarke’s Remarkable Renovations.

Erin and Oliver, from Harrogate, spent their inheritance on the run-down building in September 2019 and dreamed of turning it into a gorgeous country home that Erin’s late father would be proud of.

The couple appear on the Channel 4 programme tonight as they share their hopes to transform the property in less than a year for a budget of  £325,000.

But the DIY novice’s build is hampered by difficulties from the outset, including delays with deliveries, a bitter winter and the Covid-19 crisis, pushing their project bill up to £357,500. 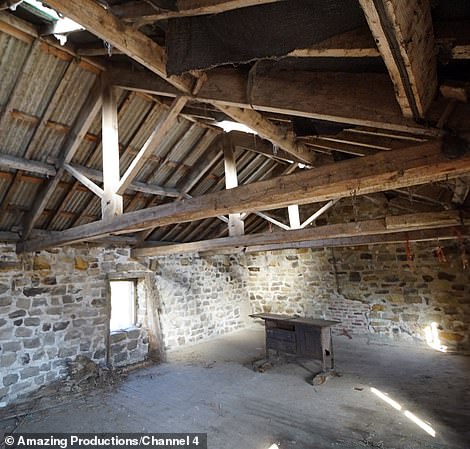 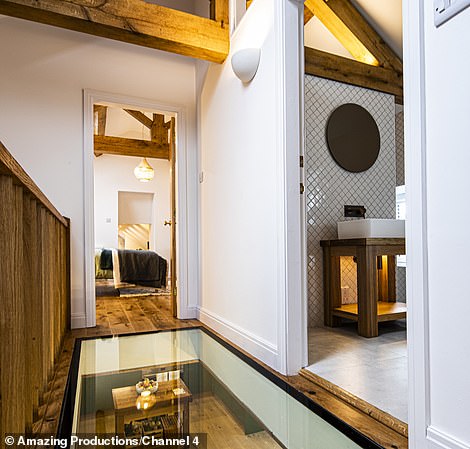 Erin and Oliver, from Harrogate, bought a 200-year-old dilapidated dung-filled barn and transform the property into a stunning family home on George Clarke’s Remarkable Renovations, which airs tonight on Channel 4

Olly and Erin, who is from Canada, met on their travels several years ago and had always rented. But after Erin lost her father in 2018, the couple decided they wanted to put down their roots and furfil their dream of moving to the country.

Using money from her inheritance, they decided to buy the barn for £400,000. They plan to restore the barn and  rebuild the dilapidated section at one end to create a trendy modern extension.

Oliver, a financial adviser, says the property was what they had always dreamed of, while Erin adds: ‘We wanted a project, we wanted something to make our own.’

Oliver explains: ‘I’m very lucky my father is a developer so he knows what he’s doing to some extent.’

Inside, the barn is full of dung, feeding troughs and stables. Both the ground floor and first floor are divided by a central wall to create two separate areas.

George confesses a lot of the building is ‘just knackered’ and needs to be completely replaced to make it the home the couple have always dreamed about. 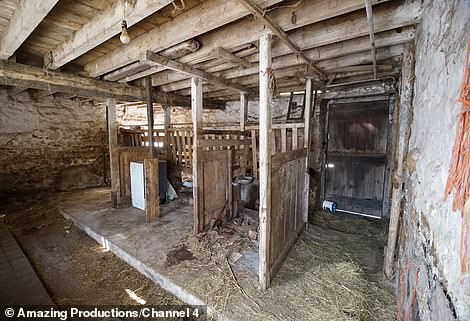 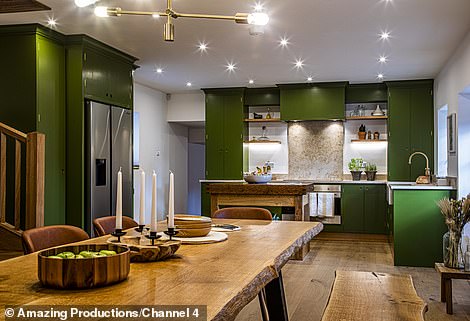 The couple spent their inheritance on the run-down building in September 2019 and dreamed of turning it into a gorgeous country home that Erin’s late father would be proud of (pictured left, before, and right, after)

Olly admits: ‘We want the outside to look as it does.’

Meanwhile Erin says: ‘I want to conserve as much of the charm as possible because that’s what we fell in love with.’

Downstairs the space will double in size, with the rebuilt space creating a plant room and a snug. The plant room will house a new ground source heat pump. It will transfer thermal energy stored in the ground to heat the barn – but can cost anything up to £18,000.

The couple admit they fear the extension could cost £25,000, forcing them to budget more elsewhere.

Meanwhile upstairs, there will be two bedrooms and a master bedroom with its own walk in wardrobe and en suite.

They explain their budget for the renovation was £325,000 but George is unsure it’s enough to cover the enormous amount of work they need to do on the barn. 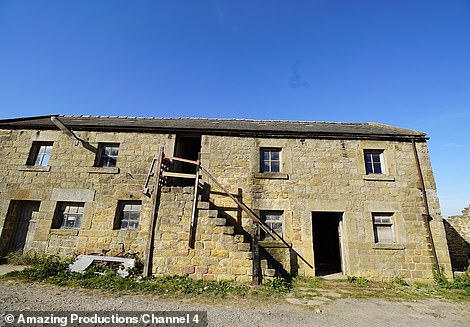 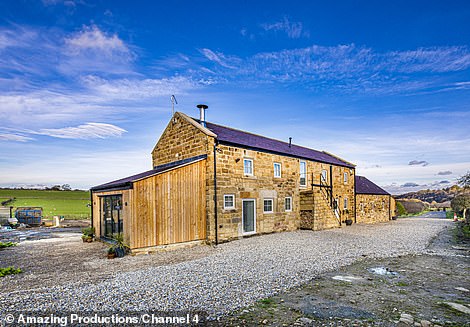 Using money from her inheritance, they decided to buy the barn for £400,000 (left). They restore the barn and rebuild the dilapidated section at one end to create a trendy modern extension (right)

He warns: ‘It is a healthy budget but as you know the building is in a terrible space.’

Just two weeks after they get the keys, the build is well underway.

Erin says: ‘We started the build last week so we’re in the very early stages. I just watch the magic unfold, I don’t get my hands dirty with anything.’

Olly’s father Gerry is spearheading the renovation mission and is very much hands-on as they start by excavating 100 tonnes of rubble. 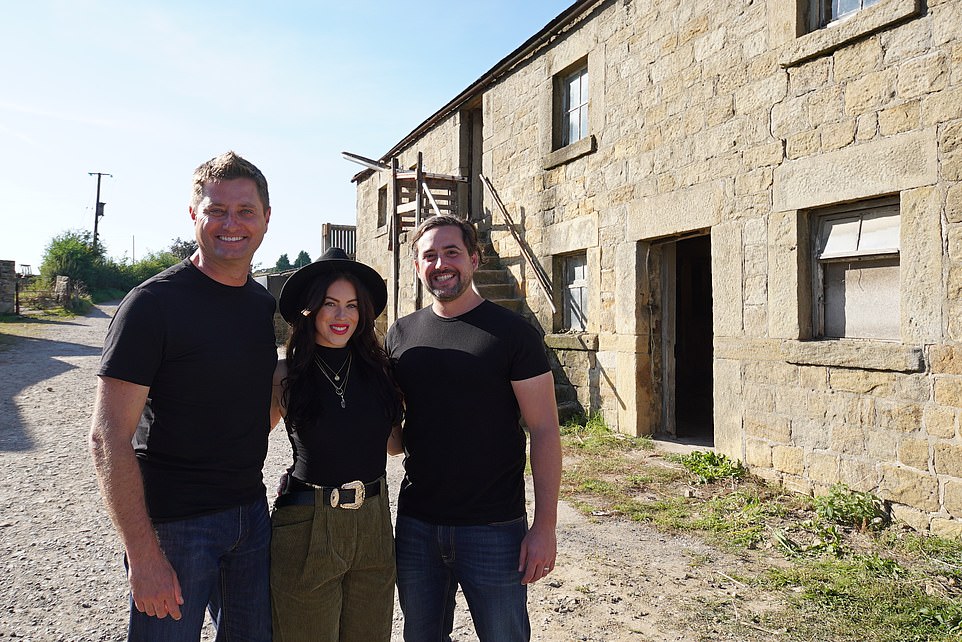 Erin and Olly initially explain their budget for the renovation was £325,000 but George is unsure it’s enough to cover the enormous amount of work they need to do on the barn (pictured, before the renovation)

A month later, the old corrugated iron roof has been stripped and the rotten trusses have been removed.

But five months in and the building looks like more of a ruin than when George previously visited.

After visiting the couple in January 2020, he says: ‘It’s hard to imagine that this is going to be your home.’

Meanwhile Gerry tells George the period is ‘crunchtime’, adding: ‘It’s the most critical time. I take it as a personal responsibility, even more so than building for a client out there in the big wide world. It’s that family pressure.

Work on the roof continues, and with full steam ahead inside, things start to take shape. The team plaster-board and insulate inside before they begin skimming.

Olly reveals his and Erin’s delight as the build continues at a pace, saying: ‘I’m excited to see where our rooms are going to be, we’ve started picking out our bathrooms and kitchens.’

Erin adds: ‘There haven’t been many hiccups. I think we’re ahead of schedule, which is amazing.’ 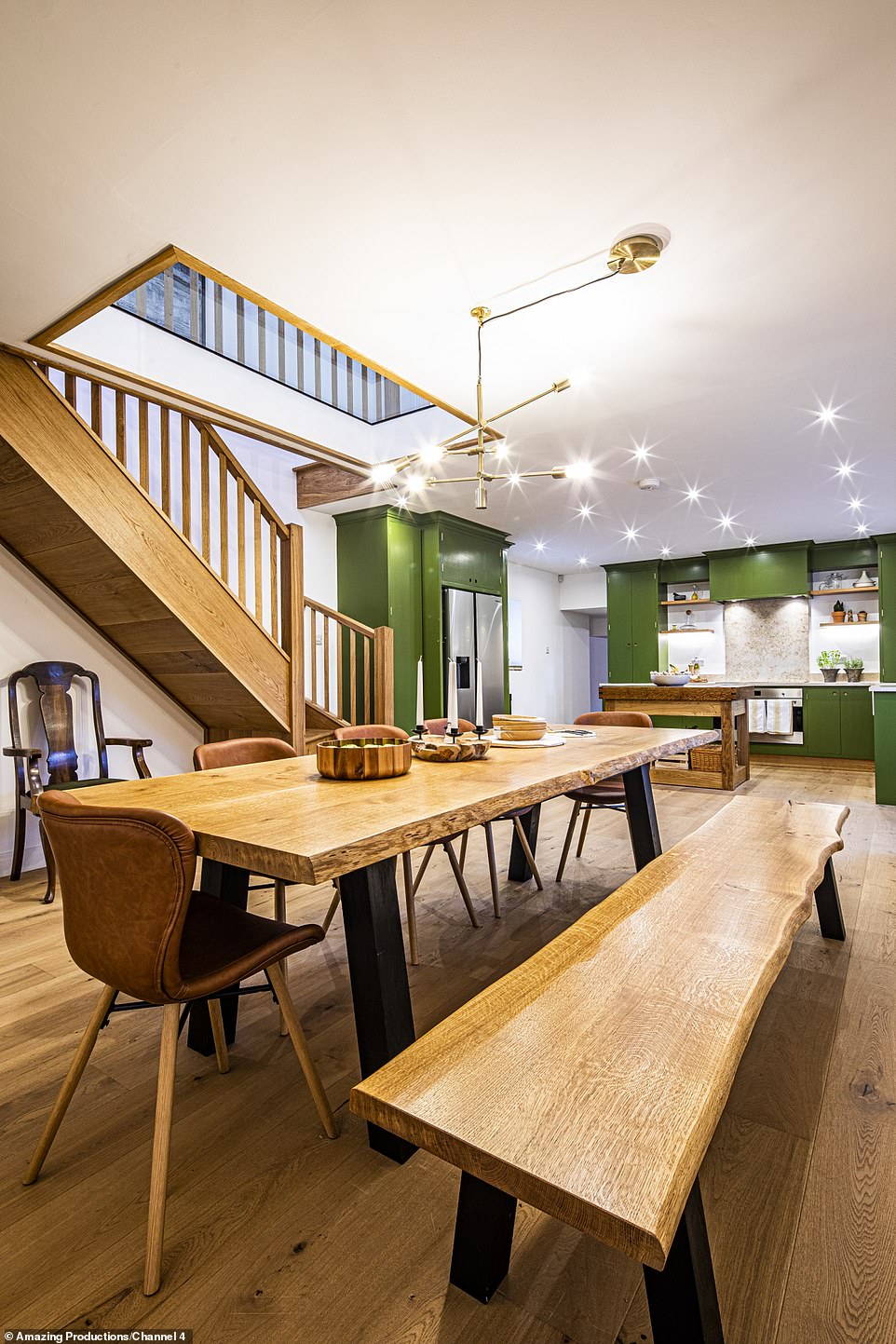 When George returns to visit the project, the tumbledown wreck of a barn is unrecognisable, with handmade bookcases lining the walls and a gorgeous green kitchen (pictured)

But weeks later, the pandemic forces the site to shut down.

With delays in deliveries, a pandemic and a bitter winter, Gerry admits the build has become a struggle to finish.

He tells George: ‘We’ve taken three months out of it because of Covid. There’s been a knock on effect getting key trade back. Everything externally is done. It’s kept the character of the barn and the surroundings, we just need to push on internally now.’

Meanwhile Olly reveals it hasn’t been smooth sailing working with his father on the build, saying: ‘There’s been some yelling matches sometimes.’

Months later, George arrives to see if the couple have finished the project and is totally blown away.

The tumbledown wreck of a barn is unrecognisable, with handmade bookcases lining the walls and a gorgeous green kitchen.

And at the other end of the building, the hay filled barn has been transformed into an stunning lounge with a statement fireplace filling the space.

Upstairs, the couple have gone all out with their luxuries including a spacious walk in dressing room leading to a high spec en-suite and a sauna.

Gerry says: ‘We just get on and aim to do it as quickly as we can. I am Dad and this is a legacy to the family. I’m enjoying them enjoying it, basically.’

Meanwhile Erin reveals: ‘It’s getting more real now, although all through the build it wasn’t. There’s going to be so many memories made at this table.’

But after George pushes the couple about the budget, Erin confesses they are ‘definitely over’.

Olly goes on to say they spent 10 per cent more than they originally planned adding final features including the sauna and fireplace.

And Erin reveals it is only thanks to Olly’s father Gerry Erin: ‘If we tried to do it ourselves it would have been 110 per cent over budget.’