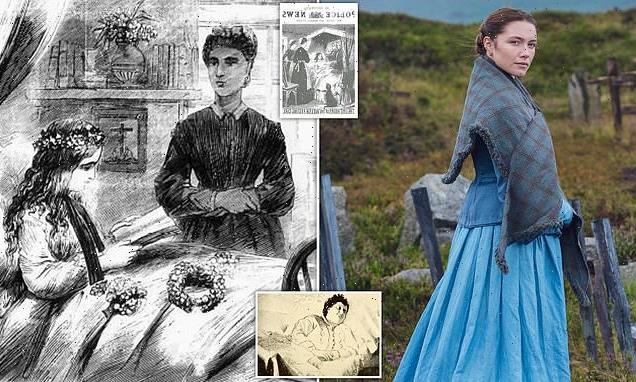 The upcoming release of a new thriller following a child who is perfectly healthy despite not eating for months is throwing the spotlight back on curious cases of the Victorian ‘fasting girls’.

The Wonder is based on the 2016 Emma Donoghue novel of the same name which follows an 11-year-old girl who is perfectly healthy though she has not eaten for months. The film stars Florence Pugh, who plays an English nurse who goes to the small village to investigate the situation.

The film is a period piece, taking place in 1862, which plays right into the star’s wheelhouse. She previously played Amy March in Little Women, a role that garnered her critical acclaim and an Academy Award nomination.

It revisits the phenomenon of the fasting girls, which saw several young women and girls around the world emerge in the late 1800s and early 1900s with the same claim, that they could survive without any food or drink. 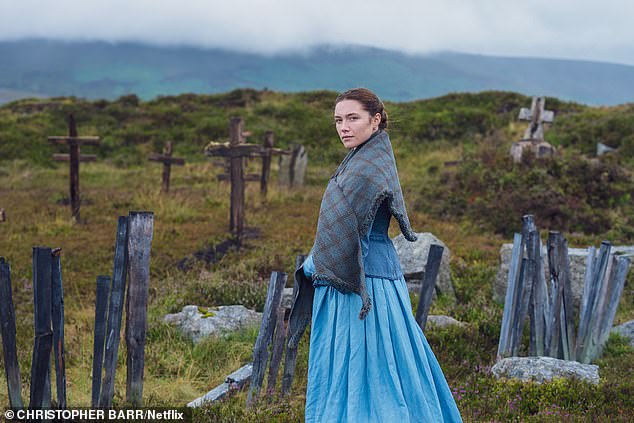 The upcoming release of a new thriller The Wonder following a child who is perfectly healthy despite not eating for months is throwing the spotlight back on curious cases of the Victorian ‘fasting girls’ (pictured, Florence Pugh in The Wonder) 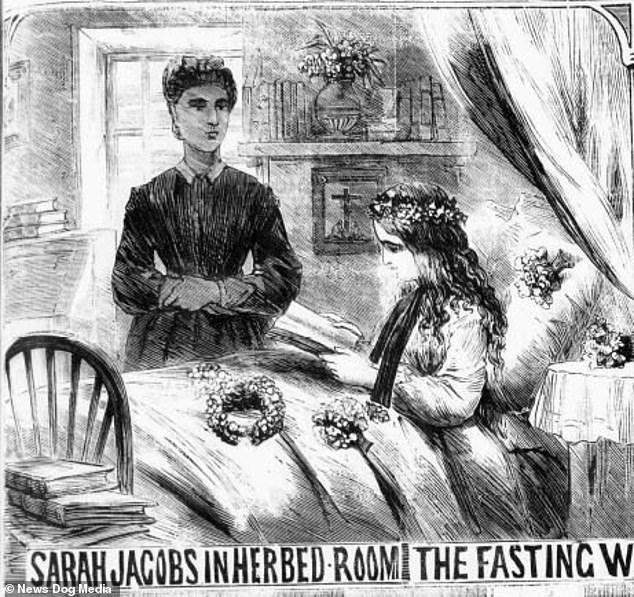 It revisits the phenomenon of the fasting girls, which saw several young women and girls around the world emerge in the late 1800s and early 1900s with the same claim, that they could survive without any food or drink (pictured, Sarah Jacob, known as the Welsh Fasting Girl, became famous across Britain in the 1860s by claiming never to eat or drink. A sketch of Sarah made in 1869)

Many of the young women achieved local renown and some even achieved international celebrity, with fascinated people travelling great distances just to lay eyes on them.

The reasons behind their apparent fasts included a religious gift and a link to psychic powers.

However ultimately all four of these women were uncovered as frauds – with one dying during the scientific tests to verify her claims.

Some psychologists and historians claim this phenomenon could be a precursor to the condition now known as anorexia. 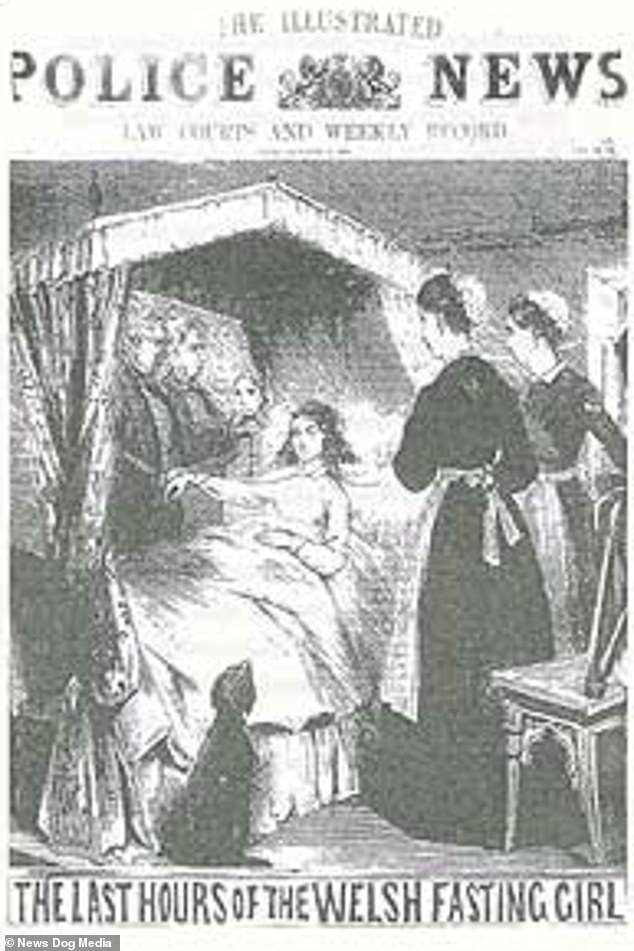 Cruel death: Sarah Jacobs starved to death in front of nurses from London who were sent to test her claims. Above, the cover of a pamphlet detailing the circumstances of her death 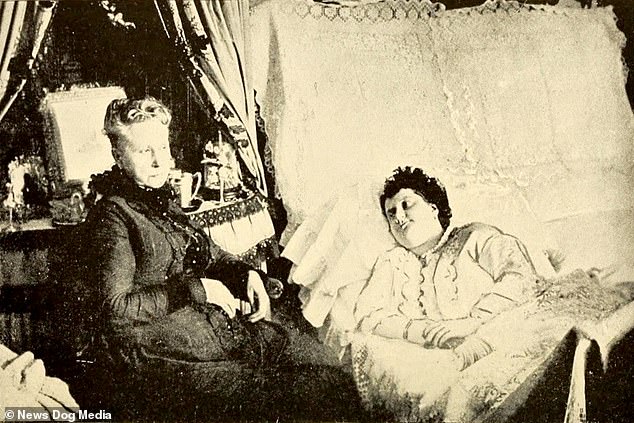 Doctors, scientists, authors, academics and clergymen visited Mollie Fancher in a bid to better understand her condition. Pictured, Mollie with her Aunt in 1886

In the late 1860s, people from across Britain flocked to a tiny village in Carmarthenshire to see a girl who claimed she never consumed any food or drink.

Sarah Jacob, known as the Welsh Fasting Girl, fell ill at the age of nine and was told to take bed rest.

It is believed that she found her time reading the bible and composing poems while convalescing to be far more enjoyable to the back-breaking farm work she was previously occupied with and so began to refuse food to keep herself weak.

Her parents, Evan and Hannah Jacob, soon joined in on the ruse and publicly claimed she had taken no food or water for two years. The story quickly spread and Sarah soon became a celebrity. 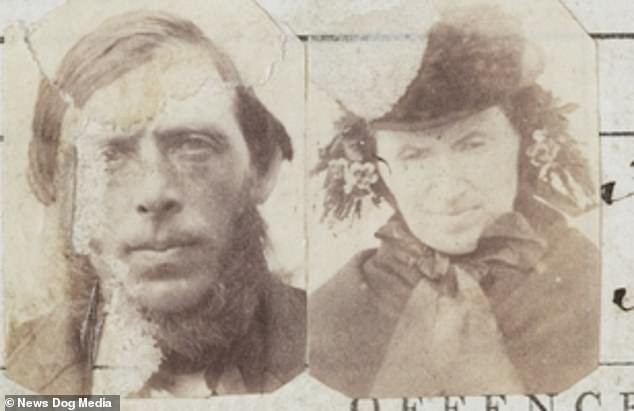 Prosecuted: Sarah’s parents, Evan and Hannah Jacob, pictured, were convicted of manslaughter following their daughter’s death from starvation. The medical staff were not 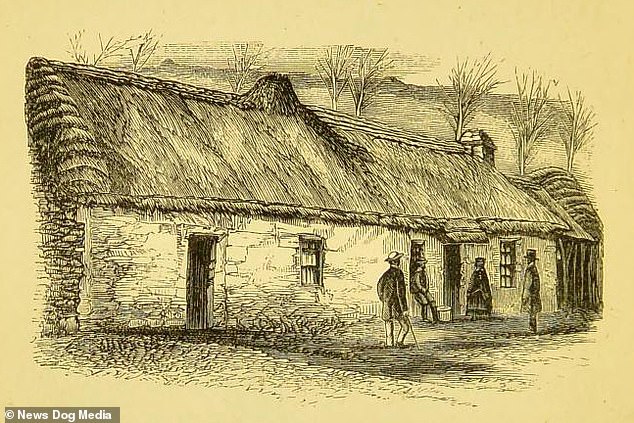 Fascination: A sketch of Sarah Jacobs’ home, where people from across the country flocked to see the schoolgirl who claimed to never eat or drink

However Sarah’s continued growth and apparent health raised suspicions as far away as London.

A doctor from Guy’s Hospital arranged for Sarah’s claims to be tested, believing one of her sisters had been sneaking her food, or that Sarah herself had been waking in the night to eat and drink.

Six nurses were sent to Sarah’s village to watch the girl day and night. The cruel experiment lasted for five days, with Sarah starving to death in front of the nurses’ eyes.

During the autopsy, evidence was found that she been desperately trying to open a water bottle placed in her bed.

Mr and Mrs Jacobs were subsequently convicted of manslaughter. The doctors and nurses involved in the experiment were not prosecuted. 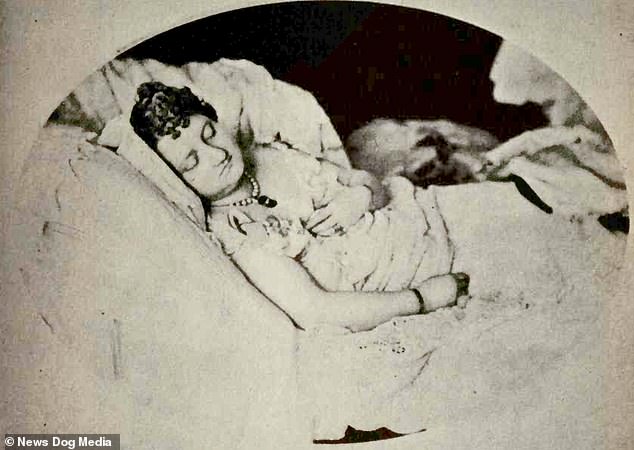 Serious injury: In 1865 Mollie Fancher was seriously injured when her skirt became caught on a streetcar and dragged her down the street for nearly a block. She suffered brain damage and slipped in and out of consciousness. She also claimed not to eat or drink. Pictured, in 1887 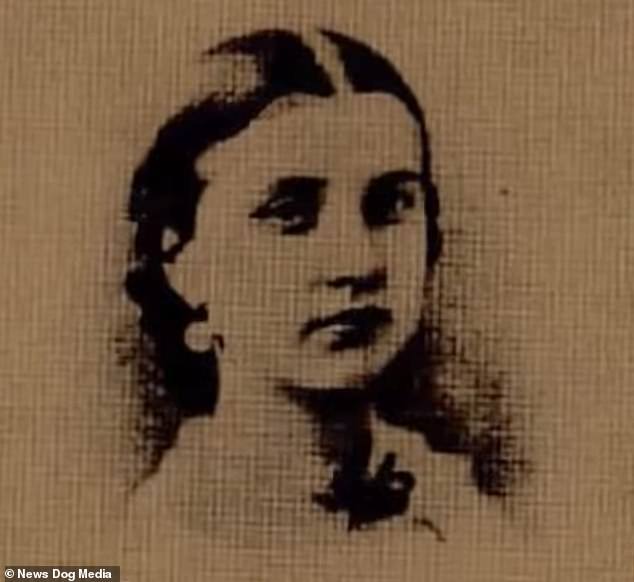 Meanwhile across the Atlantic in New York, another tale of a ‘starving girl’ captured the public’s imagination.

In 1865 Mollie Fancher was seriously injured when her skirt became caught on a streetcar and dragged her down the street for nearly a block.

She suffered head and spinal injuries and as a consequence laid in bed, paralysed, whilst slipping into trance states.

Observers claimed they never saw Mollie eat or drink and that you could feel her spinal column through her stomach.

The apparent mysteries surrounding her survival earned Mollie the nickname ‘The Brooklyn Enigma’.

Mollie also claimed to possess psychic powers and stories of her predicting a knock on the door and thunder storms started to emerged.

Doctors, scientists, authors, academics and clergymen visited Mollie in a bid to better understand her condition.

By the 1890s Mollie’s condition had improved, she regained her sight and was able to move. This coincided with the apparent waning of her psychic powers. 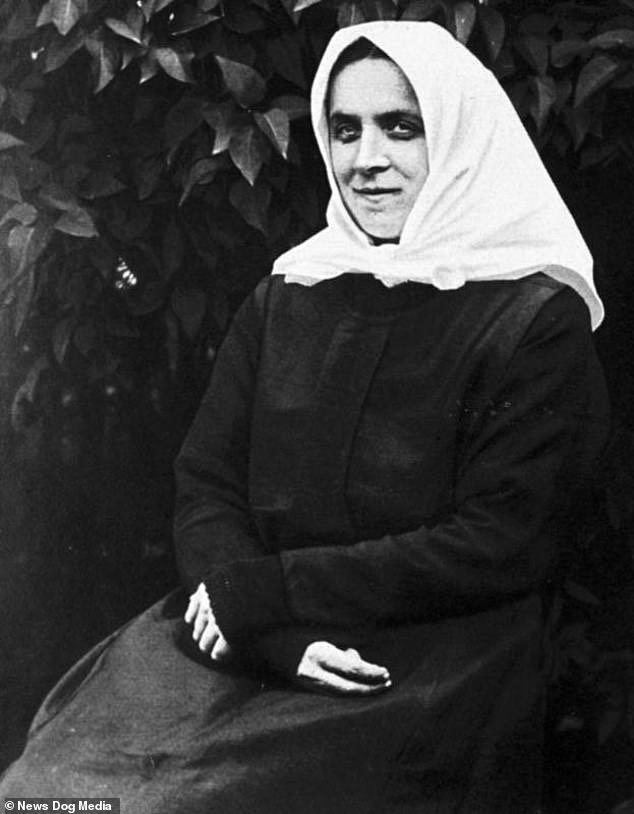 Religious gifts: Therese Neumann experienced ‘blood-coloured serum’ oozing from her eyes, as seen above, in 1926. She also claimed to survive on nothing more than Holy Communion

And she was far from the ‘fasting girl’ to step into the spotlight during the period.

After a young German woman took a nasty tumble off a stool in 1918 it started a remarkable chain of events that led to some claiming she was a clairvoyant.

The subsequent spinal injury may have been the cause of a whole host of ailments that Therese Neumann suffered, including blindness, gastric problems and paralysis.

In 1926 a ‘blood-coloured serum’ oozed from Therese’s eyes and she began suffering Stigmata during Lent.

In 1927 she claimed to have been visited by a Saint who told her that food and water were no longer necessary – just Holy Communion. 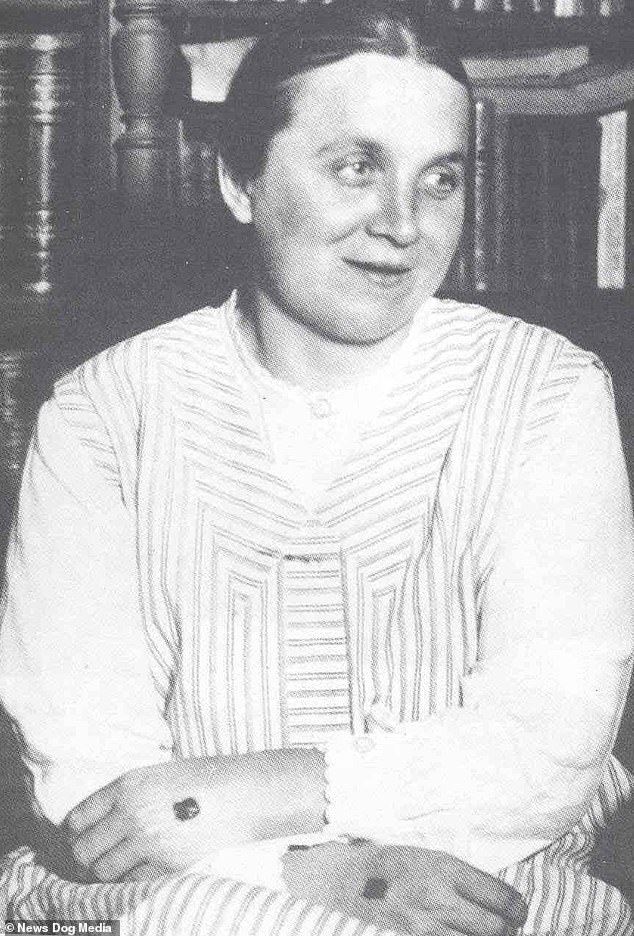 Under scrutiny: Tests apparently showed Therese Neumann to be a genuine ‘starving miracle’. However some of her contemporaries remained skeptical of the apparent phenomenon

She was observed day and night for a fortnight in July 1927, with doctors and nurses even measuring the amount of mouthwash she used so they could make sure that she hadn’t swallowed any of it when she spit it back out.

By the end of two weeks, the medical team concluded that their patient never took or even attempted to take food.

Though she lost weight at the beginning of the observation period, Therese apparently gained five or six pounds by the end of it.

Although this was taken as proof of her supernatural powers, some contemporaries believed her to be a fraud who was aided and abetted by her father.

While she comes after many other ‘fasting girls’ she is still classed with those from the Victorian era. 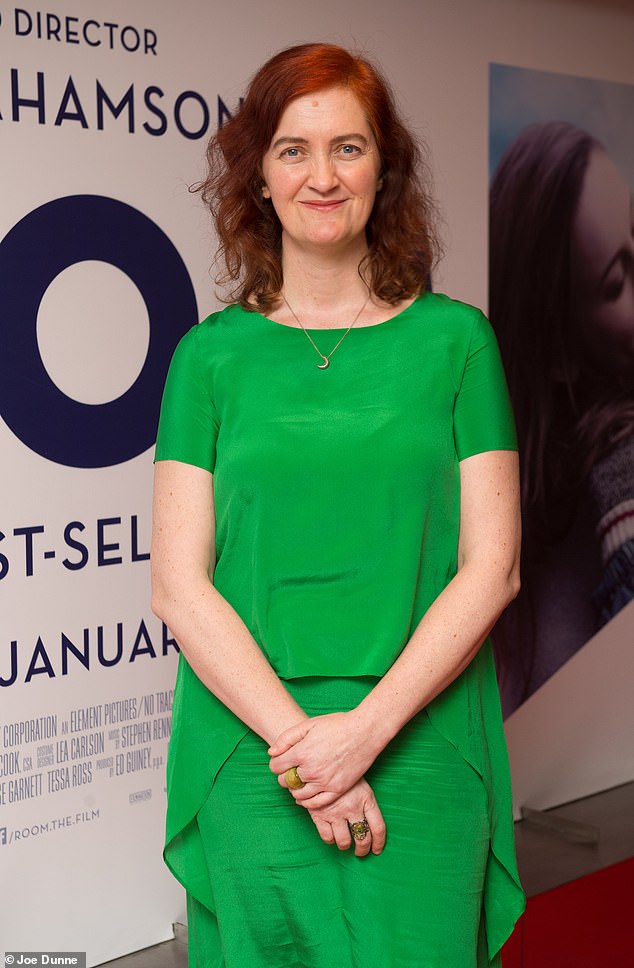 Emma Donoghue’s The Wonder came out in 2016 and at the time was hailed as a thrilling domestic psychodrama (pictured, the Irish-Canadian author)

Therese died from cardiac arrest in 1962.

Emma Donoghue’s  The Wonder came out in 2016 and at the time was hailed as a thrilling domestic psychodrama.

Based in Ireland in the 1850s, and Anna, a pious 11-year-old, claims to have eaten nothing for the past four months.

It’s not the first time one of Donoghue’s novels has been adapted for the big screen.

Her Booker-shortlisted Room was adapted into a 2016 film which was inspired by the story of Elisabeth Fritzl, who endured 24 years of captivity in the basement of her family home in Austria.

The movie follows the story of Ma who has been kidnapped and repeatedly raped in a shed, which she calls Room.

She gives birth to a son, Jack (Jacob Tremblay), and tries to use creativity and imagination to create a fulfilling life for her the five-year-old son.