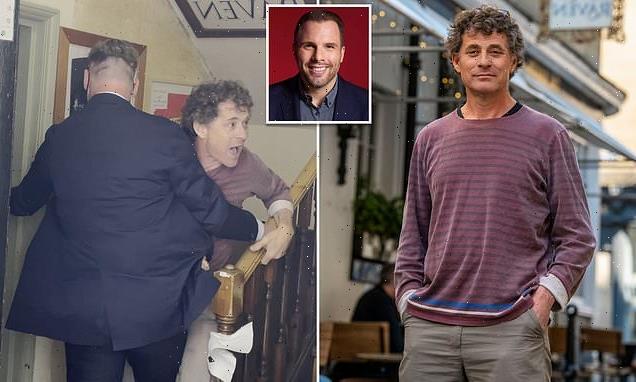 DAN WOOTTON: Let’s all raise a glass to Rod, the landlord who spoke for millions when he stood up to the politicians who have destroyed an industry and turned our country into a fun-free zone

The hellish 10pm curfew that pushed masses of folk out onto the streets at the same time and was backed up by no scientific evidence whatsoever that it actually reduced Covid transmission.

Being ordered to check in using a QR code on a privacy-invading government phone app that one day soon might contain your health records before being able to order a pint.

Wear a mask in a pub beer garden, but only when you’re going to the loo.

And, in Sturgeon’s Scotland, a modern form of prohibition that actually bans pubs from serving any alcohol indoors whatsoever!

Just a selection of the rules and regulations that have decimated our hospitality industry this past year, already resulting in the loss of over 350,000 jobs, 12,000 businesses and sales of £86 billion, with much of the damage still to come.

I believe our political leaders have overseen the destruction of the great British pub tradition for the sake of a health and safety autocracy.

But where is the anger about the wilful damage being caused to one of our most important industries? Largely invisible in most of the broadcast media.

That was until yesterday when a hero emerged in the form of Rod Humphris, the Labour-supporting landlord of Bath’s The Raven who screamed at Keir Starmer: ‘Get out of my pub!’ 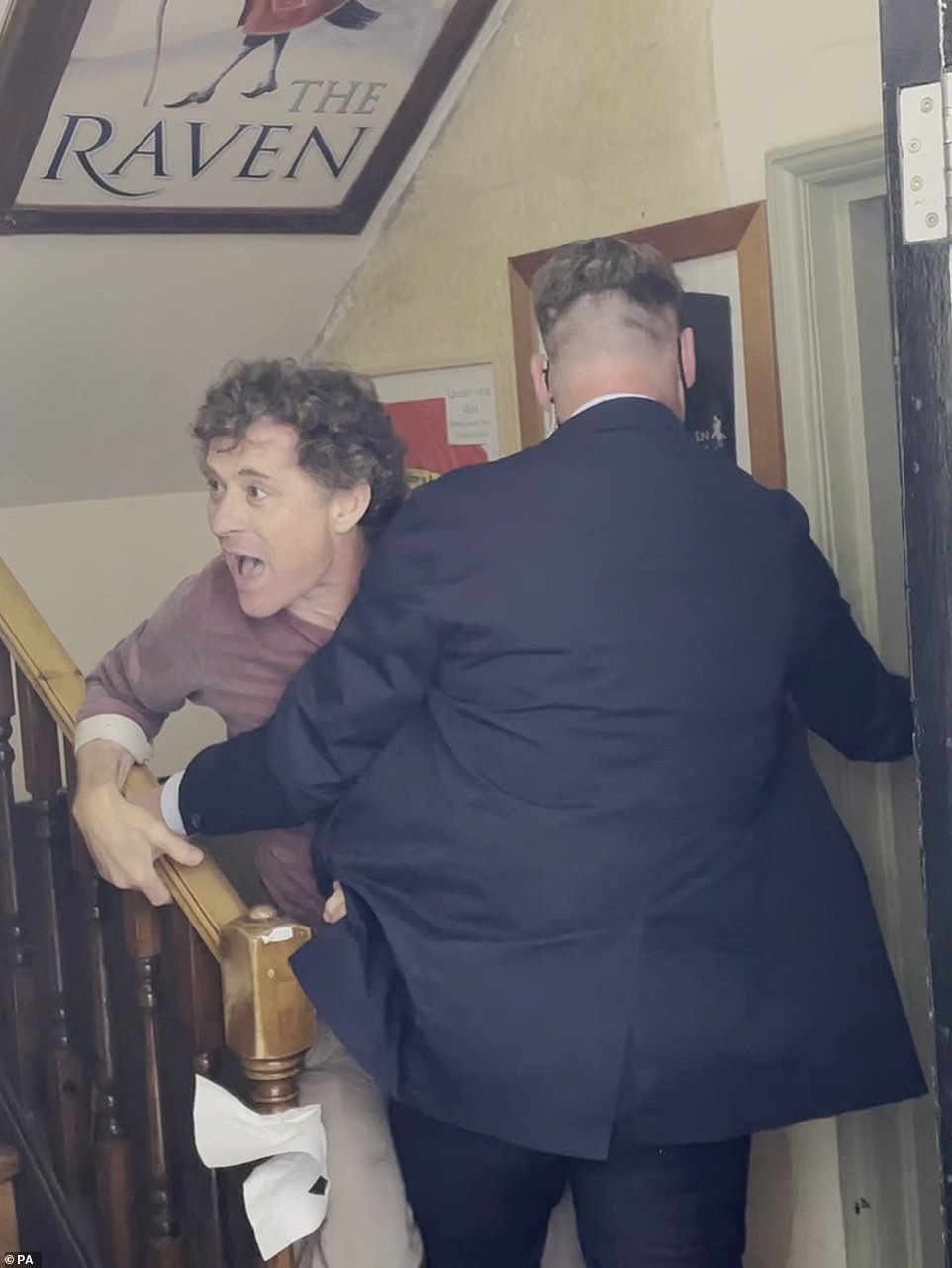 A hero emerged in the form of Rod Humphris, the Labour-supporting landlord of Bath’s The Raven who screamed at Keir Starmer: ‘Get out of my pub!’

Decrying the failure of Starmer – who I’ve long dubbed the Leader of No Opposition – to challenge the Government’s lockdown decisions, he passionately told him: ‘Thousands of people have died because you have failed to do your job and ask the real questions.’

Sharing the fear of so many business owners, Rod, a 54-year-old part-time crime writer, later said the regulations were ‘insane’ because they are not ‘based on any evidence or good sense’.

And he added: ‘It feels as if we have been punished for some reason. We jumped through all these bloody hoops to do this and we’re not even certain we’re allowed to open again on May 17. And I would bet money they’re going to try and lock us down in October.’

Rod’s anger bubbling over came on the day that both the hapless Labour leader and Prime Minister Boris Johnson decided to down pints as part of their local election campaigning.

Boris was lucky he didn’t get booted out too. 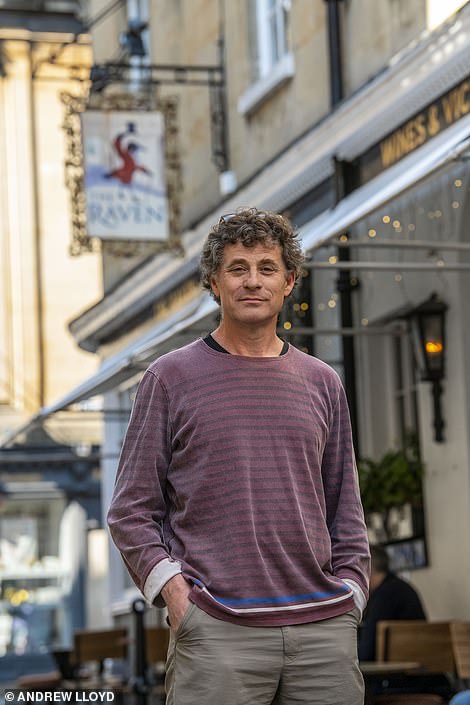 Pictured: Rod Humphris, who runs The Raven in Bath

How can either of them have the audacity to drink in a pub beer garden at the moment after unnecessarily ruining the entire hospitality industry?

I encourage landlords up and down the land to follow the lead of Rod and slap bans on both Boris and Keir, who deserve to be barred from watering holes until they stop the needless destruction of the hospitality industry.

Predictably, rather than focus on how Boris, backed by his lapdog Starmer, have brought pubs to their knees by forcing them to spend thousands on Covid protective systems only to shut them down the next week, much of the media – so in step with the Government’s ongoing hysteria – attempted to try and demonise Rod.

That’s rubbish. Rod is not a denier. He had the damn disease in March and stated clearly: ‘Covid is obviously completely real.’

But what he is calling for is a balanced debate about the effectiveness of draconian lockdown restrictions, which seems perfectly sensible given that yesterday there was just one reported hospital death from Covid in England.

I believe what the Government is putting us through to socialise, after a year of isolation for many, is inhumane.

On Friday night, I booked to see five friends in one of those outdoor dining pods. But it was rendered completely useless because the sides had to be left open to the buffeting winds thanks to yet another stupid state sanction.

At this point in the pandemic, with 99 per cent of vulnerable Brits now vaccinated and cases, hospitalisations and deaths plummeting, I deeply resent having to sit outside in the freezing cold to see a loved one.

If we continue at this rate, many establishments will simply never open their doors again.

Katie Nicholls, the hard-charging chief executive of UK Hospitality, said recently that big businesses, including the likes of Greene King and Wetherspoon, are ‘running on empty’.

She warned many venues have already been closed for a year and ‘the longer it goes on the less likely they’ll be to reopen.’

It’s also about time our leaders start acknowledging that it’s not a binary choice between lockdown and deaths, too.

In fact, as Rod stated, unnecessarily dragging out lockdown restrictions is going to cause significant mortality in the coming months and years. 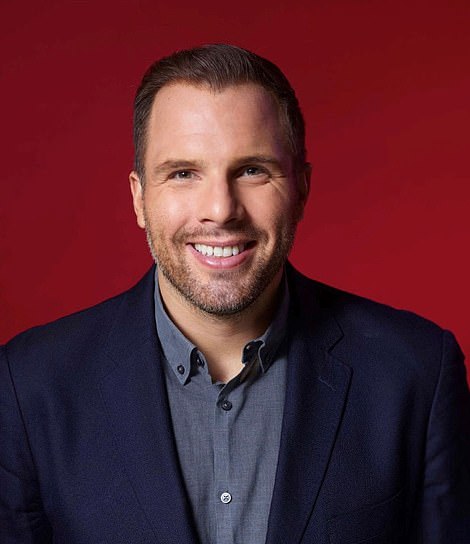 I believe what the Government is putting us through to socialise, after a year of isolation for many, is inhumane, writes DAN WOOTTON

There’s the cancer deaths as a result of the NHS being turned into close to an exclusively Covid service for parts of last year, not to mention the missed heart attacks and strokes.

That’s before you get to the lockdown-inflated cases of anorexia, drug abuse, domestic violence and mental health problems.

But, of course, because he has questioned the prevailing mainstream media view embracing every nonsensical aspect of authoritarian lockdowns, Rod was treated to a circular firing squad courtesy of the scare mongers on Good Morning Britain.

He said of his altercation with Starmer: ‘This virus has overwhelmingly impacted on the old, the young, the vulnerable and the poor, and if there’s anybody who should be standing up for them it’s him. And he’s utterly failed to do it.’

Having spoken far too much sense, he was rudely interrupted and accused of lying by GMB’s p**s poor Piers Morgan replacement Adil Ray without being given a chance to respond.

Kevin Maguire then called him a ‘covidiot’ and conspiracy theorist for questioning lockdowns, even though Rod was calmly providing real-world examples of places like Sweden and Florida where a different strategy appears to have worked.

It was one of the more unsavoury TV take downs I have seen in recent years. But because Rod is sceptical about the benefits of lockdowns, it was viewed morally acceptable.

Eventually, it was Dr Hilary Jones who issued the biggest put down: ‘With the greatest of respect, you should stick to pulling pints.’

Do you not get it, Dr Hilary? That’s all he’s been trying to do for the past year. In a Covid-secure manner while protecting the industry that is his lifeblood.

Rod is a Great Briton. A heroic figure who should be celebrated, not the subject of attacks.

This is your reminder that it’s not normal to have actual fun police stride in vast numbers through the joyous streets of Soho in London patrolling outdoor drinkers, while ignoring muggings, stabbings and robberies.

While this madness continues, there is going to be anger. Fury in some instance, from honest, hard-working individuals like Rod who have seen their livelihoods ripped away without being provided with appropriate evidence the damaging measures will help control the virus.

To dismiss those angry people as Covid-deniers is not only wrong and offensive, but will also make folk who have lost everything this past year thanks to lockdowns even madder.