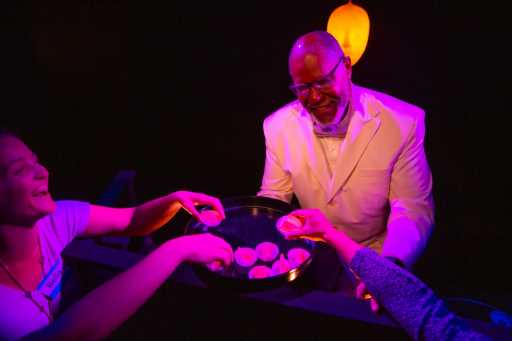 Some of the best parts of “Theater of the Mind” happen after the show has ended, its long tail cracking, whip-like, as you try to eat dinner or fall asleep.

That’s intentional, and one of the most successful aspects of a production that is fundamentally light and playful. Audience members leave “Theater of the Mind” with a note encouraging them to turn it over in their minds. “With a show like this, what it is can often be revealed when we talk about it and rewind the experience,” co-creator David Byrne writes. “You can change the story anytime.”

The immersive, interactive production has been a long time coming. Its world premiere in Denver on Tuesday, Sept. 13, follows a two-year pandemic halt that found the creators (Byrne and Mala Gaonkar), director Andrew Scoville and producers rethinking the contours. Whatever the changes, or doubling-down on themes, as the case may be, they’ve resulted in a good-natured but lanky, disjointed production.

Co-written by former Talking Heads leader Byrne and businesswoman Gaonkar, the show is a partnership with Off Center, the experimental arm of the Denver Center for the Performing Arts. “Theater of the Mind” adds credibility and value to the city’s renowned immersive scene (part of the reason it’s set here), and is often laugh-out-loud funny amid its bittersweet drama.

Instead of seating a large audience — as in Byrne’s Tony-winning musical “American Utopia” concert/musical — “Theater of the Mind” whisks groups of 16 people at a time through shifting “memories” of Byrne’s semi-fictionalized childhood. They’re rendered in movie set-like detail as interconnected, themed rooms that attempt to pull the rug out from under our senses of vision, taste and hearing.

Set at Northeast Denver’s York Street Yards, a faceless line of red-brick docks, the show spans 15,000 square feet but feels intimate and labyrinthine. At the world premiere on Sept. 13, attendees guffawed and oohed-and-aahed their way through a tight, 75-minute narrative punctuated by experiments developed with neuroscientists in order to destabilize the brain.

An attendant initially guides the group through a door and onto the show’s starting line — a nondescript room surrounded by identical, seafoam-green doors. The 1960s-style purgatory seems influenced by midcentury set design, a la Billy Wilder’s “The Apartment,” and fittingly, attendees are asked to grab seemingly random nametags that further play with notions of identity.

If you’re not comfortable being part of the show, beware: “Theater of the Mind” doesn’t give you a choice. On the premiere night, the actor-guide (a plucky, crisp Annie Barbour) addressed a group with scripted dialogue, but also seemingly slipped out of character at times to query them about their own experiences. From a funeral parlor with a coffin/piano (it’s as morbidly delightful as it sounds) to a mission-control room wreathed in wires and monitors, the variety of environments keeps things moving fast.

“We’re all old friends here,” the dialogue essentially posits, and the intimacy is immediate as you’re asked to introduce yourself to, dance with, and otherwise deeply consider your fellow attendees. The show picks up speed as it winds on, especially in moments where Byrne (who is not present, but whose pre-recorded voice and music is sprinkled throughout) leans into his absurd sense of humor. An oversized, 1950s-style kitchen makes the audience feel like a 6-year-old, practically inviting you to jump up on a huge chair, a la Lily Tomlin’s Edith Ann.

If you’re into extra-textual experiences — or continuing to research and engage with the show after it’s over — “Theater of the Mind” is a smorgasbord. Sans playbill, you can scan a QR code on your parting note that tells you more about the experiments and how they work. But the production also leaves a lot on the table, squandering a late-show opportunity to make a virtual-reality segment even more meaningful and interactive, and padding “scenes” with awkward monologues.

Cohering after the fact is a fine trick, as audience members can rewind out-of-sequence settings and themes to make sense of them. An essential question: Can Byrne and his white-suited proxies (almost all of them local actors) be trusted inside the narrative? And an even bigger one: Is it worth going to the show again to chew over the intricacies?

Not at this point, unless you want to experience a different actor-guide. Further tightening the dialogue and tethering it to the environments would increase the sense of immersion, given the great mounds of disbelief that attendees are asked to suspend.

For all its high-production values and pedigree, “Theater of the Mind” picks a relatively small patch of ground and sticks to it. Like all hybrids, it can feel both overly familiar and diluted. It’s less a radical artistic experiment than a non-linear storytelling tour with funhouse diversions. But after the show ends, it takes on poignant extra dimensions, and that may be its greatest trick of all.

“Theater of the Mind.” Immersive theatrical experience co-written by David Byrne and Mala Gaonkar, produced by Denver Center for the Performing Arts Off-Center. Running through Dec. 18 at York Street Yards, 3887 Steele St. New performances added this week for October-December. Tickets: $55-$65. Restricted to ages 18 and up, or 16-17 with a guardian. theateroftheminddenver.com